A Recipe For Anarchy

If they were just livening up TV debate, one could ignore them. But what is the remedy when the lunatic fringe becomes the sane centre? 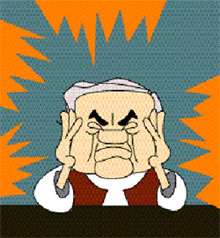 outlookindia.com
-0001-11-30T00:00:00+0553
Is India ungovernable? The question can no longer be avoided or postponed. At the best of times, this country's very realistic dream of becoming an economic and political superpower seems increasingly distant, perhaps a mirage. We are, instead, furiously preoccupied with putting together a structure which moves forward in fits and starts at a maddeningly slow pace. Unfortunately, even that curtailed, cut-price dream has come up against a new and bizarre impediment.

India is the proud possessor of a loud, raucous, contentious, messy democracy which, till date, has shown extraordinary flexibility. I know there are well-meaning people who go moist in the eyes when they compare India with China. Statistics (Chinese statistics, incidentally, lie humungously) are not the only barometer of gross national health.

We cannot pat ourselves on the back, we cannot indulge in modest self-congratulation for having successfully created a multi-religious, multi-lingual, multi-ethnic, secular society which frequently takes on its rulers, rubs their noses in the dirt they have spawned and finally enjoys the power of ejecting them from office—all these privileges come with a price tag on which is written: surrender visions of Chinese-style quick prosperity.

The Chinese miracle, however beguiling, is not for us. Happily, other miracles are both desirable and catchable. Miracles which allow one billion people to live as free citizens, while simultaneously giving them an opportunity to choose, say, between Pepsi and Thums Up. Doubtless, that is the slower, harder way forward, but it is the one we have consciously selected. Except for a few free-market ayatollahs and hard-core Marxists (the soft-core, which includes Buddhadeb Bhattacharya, are quickly coming around), the roadmap for India's tryst with the big league has, by and large, been signed and sealed.

In this document, competing interests and lobbies, political parties, pressure groups, public interest bodies, ngos, cranks, eccentrics, extremists can be harmoniously accommodated, that is, their voices are heard within the framework of our legal and constitutional arrangement. If the cause they champion is defeated after a fair and democratic fight, they usually learn to accept defeat gracefully. Even Mr Nanjundaswamy of Karnataka, who made a transient name for himself by tearing down a McDonald's outlet in Bangalore, has accepted the discipline of the agreed roadmap.

That leaves only Mr Praveen Togadia. If Shri Togadia and his half-a-dozen colleagues were merely adding to the decibel level of our already noisy democracy and fouling up civilised discourse, one could dismiss them as a fringe nuisance who liven up television debates which are increasingly becoming a form of spectator sport in which the loudest shouter wins. But what is the remedy when the lunatic fringe threatens to become the sane centre? What is the remedy when the prime minister of a country is publicly berated by one extra-constitutional authority (the RSS) on the complaint that he is "not listening" to another extra-constitutional authority (the VHP)? What is the remedy when a group first places itself outside the system, then refuses to play by the rules of democracy, and then claims to have been cheated?

If the aforementioned reprimand to the holder of the highest elective office in the land concerned his part-time poetry, or the need for him to recite the Gita, or for him to give up consuming non-vegetarian food, it would be a matter of intra-parivar dialectics.Unhappily, the rebuke was about fdi, divestment in the public sector, the functioning of the pmo, relations with the US, military attack on a neighbour, breaking the law to build a temple.... Clearly, these demands, singly and collectively, belong to the temporal world and have little to do with the upliftment of the Hindu soul.

After nearly 60 years of eventful existence, the Indian nation-state has arrived at a few conclusions. It has "settled" a few core issues. These revolve around the basic nature of the society we inhabit. Mahatma Gandhi, Jawaharlal Nehru, Sardar Patel, B.R. Ambedkar, along with the founding fathers of our Republic, gave us a blueprint which has not been substantially altered by successive regimes of differing political persuasions. For the overwhelming majority of citizens, the blueprint has served the Republic well and is respected and admired in the free and the unfree world.

Now we have some short-tempered people who have never stood for public office, never submitted their programme to electoral test, never had any experience of governance, who have no understanding of international complexities, insisting that the blueprint is a "fraud" designed to keep the majority community in chains. They mean, in short, to stand India on its head by opening up and reversing "settled" issues. If the political party which currently rules India, and to which they indubitably belong, finds their agenda a serious embarrassment—an embarrassment which is fast losing them electoral popularity—can you imagine what chaos and anarchy they would unleash if that party was out of government? Can you blame the prime minister for not listening to them?

All the pressures and pulls facing our fully-stretched democracy pale into insignificance if you add the demands of Messrs Sudarshan, Singhal and Togadia. Together, they constitute the perfect recipe for ensuring India becomes permanently ungovernable. Given the country's standing difficulties, only a bona fide masochist who is "anti-national" to boot (to borrow Mr Togadia's favourite word) would even contemplate wasting the nation's energy considering the wish list which so dominates our headlines and TV screens.

Mr Prime Minister, thank you for not listening.