The Navel-Gazing Years are over. Optimism is dead and ordinary Americans struggle to come to ter ms with an unreal seeming reality. 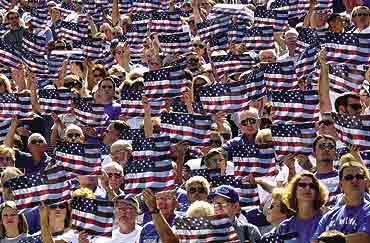 outlookindia.com
-0001-11-30T00:00:00+0553
Like so many thousands of others, he went out and bought himself a gun after the attacks on America. The man then went home and hung it up on the curtain rod, over the bed of his three-year-old son. No, he wasn't expecting Osama bin Laden to climb in through the window. He was just doing the tough thing in suburban Virginia, just as they were trying to do in the skies over Afghanistan. Tragically for him, the next morning the toddler shot himself fatally, playing with the gun.

America has its finger on the trigger these days. It's a nation rushing to buy guns, the women and the elderly more than anybody else. Full up, shooting schools are turning away new gun-owners—everyone's praying for at least as much business as the gun dealers.

The US has always been the land of stars and stripes, as also guns. The American flag flies everywhere now—on cars, on houses, even on those T-shirts. And it's not in mourning; these are now battle flags of a nation gunning for 'em, whoever they are, wherever they may be. Last week, a premier football match was just about to begin when the loudspeakers announced that America was bombing Afghanistan. The match was quickly forgotten. The stadium reverberated with shouts of "usa, usa". In a schoolroom in New York, children were singing "God Bless America". The usually sensible Washington Post carried a banner headline two days later: "US Controls Skies, Hunts New Targets." So there was a Taliban Air Force, then? The Americans are more at war in America than in Afghanistan.

Wednesday, last week, we were all ordered to leave our train in downtown Washington and cross over. There had been a gas leak, came the announcement. It later turned out to be a hoax. The pharmacies in Washington have sold out their stocks of ciprofloxacin, an antibiotic that can purportedly fight at least some of what has suddenly become familiar as bio-terrorism. The gas masks had sold out much earlier. More were ordered, these too are selling out. "Can't get 'em fast enough," says a store-owner.

The American Red Cross has asked people to store at least three gallons of water per head at home, and to keep a 'communication plan' ready. After the air strikes in Afghanistan and the fbi announcement that there was a "100 per cent chance" of more terrorist attacks, Americans are taking more and more emergency measures. Window panes in Capitol Hill have been lined with plastic sheets. Traffic around government buildings has been re-routed. The Bethesda Medical Centre, in a Washington suburb, is now defended like a nuclear installation, for it houses gases that are a bio-terrorist's dream. The fight has come home. America sits on the edge before the TV and waits, it's not sure for who.

It's dangerous, this wait. They should have been in the shopping mall, for God's sake, for America's sake. Last week, when a Milwaukee shopkeeper announced that his sale of home improvement kits was going up, it became a matter for national concern. Was it part of a larger malady, the country was asking. The Christian Science Monitor worried that it was a sign of Americans spending too much time at home. For what's an America that's not buying and flying?

If there's danger to Washington, it's at the White Flint shopping mall and not at the Medical Centre. "We're just not getting enough people coming in through the door," says a shoe store manager at the mall. At a boutique across, an evening dress has been marked down from $70 to $15.There were still no buyers. Pollsters have been producing depressing figures by the day but they needn't have bothered. The empty malls said it all.

"At the end of the day, you know, this is the economy of the unnecessary," an old friend with the World Bank told me. "When Americans buy only what is necessary, you know you have a recession." The president, senators, congressmen are all shouting out loud that about the most patriotic thing an American can do these days is to go out and shop. And buy something more than a US flag. Americans must spend for America's sake, they say—but they aren't doing nearly as much as they need to. Bin Laden or whoever it was did not hit just the wtc, he's hit every trade centre.

Only in the US do schoolkids get formal lessons in shopping. Now all of America is getting lessons; the battle is on to get Americans back to the malls. General Motors is giving away cars on interest-free loans, at cut-rate prices. Interest rates have been cut and cut again, and the last was not the final cut.

America is yearning for the reassuring inanity of its advertisements. Nine out of 10 Americans want ads back on TV as before. The company, Writhlin Worldwide, says most Americans want advertising because it's a sign of normalcy, some say because it's essential to the economy, some to show the terrorists that they can't beat America. To get back at bin Laden, advertise. The sale signs will hit him harder than those wasted missiles. This war will be won or lost less in Afghanistan than in the giant malls of American suburbia.

At least some of the shock that still hovers over Americans comes not from the loss of lives but from knowing that a disaster can happen in America outside of Universal Studios. It was a violation of innocence, of what Americans genuinely feel is innocence. Bush said he was amazed to see the hatred for Americans in Islamic capitals. "I just can't believe it because I know how good we are," he said. Apparently, there is such a thing as the innocent American entirely disconnected from cia misadventures.

Americans have always known more about Martians than the Mujahideen. It came like an attack from aliens, and in turn America turned on the new aliens at home and outside. Right now, America is holding on to its institutionalised politeness, but just about. Anyone who looks an alien is under surveillance, much of it citizen surveillance. On the streets, in the trains, the eyes say it. That relationship with Martians was innocence; this now is the loss of that innocence too. It means, among other things, no more students from India knocking on the doors of US universities for some time.

The 'Navel-Gazing Years Are Over', said one of those typically introspective headlines of today's US. In those attacks, America lost so many, and with them its 'Disney-ed' sense of safety. Day after day now there is talk and more talk on TV for a nation tuning into a self-discovery channel, bewildered by the blow to its muscular optimism. A people crowded by the sickening truth that this Bad Guy is for real. A people whose lost innocence is leading to a cruel question: how does America become less American?