A Quiet Day In Heaven 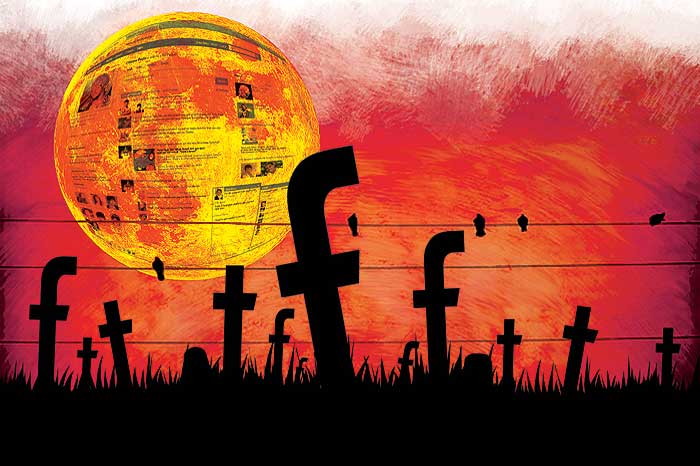 ‘HEY angel...happy birthday :)!!! Take care, be good...I don’t want any complaints this year...!!!’ Add to that scores more messages, virtual pink marzipan cakes and bear-hugs and you have a quintessential Facebook wall, one that any twentysomething would be proud of. Only here, the birthday wishes sit awkwardly next to “rest in peace” messages.

Two years after her death, TV journalist Soumya Viswanathan’s wall is still bustling with daily, sometimes even hourly, posts from friends and family who keep coming back to her profile page to share not just their grief but also to update her about their own lives. So, they write about new jobs and promotions and tag her in their photos, undeterred by the fact that she will never actually read or see them.

It’s a sentiment shared by most friends of Syeda Shagufta Ali, who passed away in September this year. Her childhood friend, Satya Bikram Ghosh, an IT professional from Bangalore, responded to the news of her death with an emotional post on her wall: “...wherever you are stay in peace... I don’t know what to say, hope you read this...” He half-believes she will. “I can never accept that she is no more. Her presence is very much there in my life and this is my way of connecting with her,” he explains.

Death, then, does not conquer all. The virtual presence lingers, and as Facebook profiles and pages outlive the animated individuals they once represented, they take on a reality of their own. “It’s a tangible space that makes you feel the person is still around. You still have access to his or her life through photos and videos, which is reassuring,” says filmmaker-editor Bela Negi, who admits it took her some time to get used to having a deceased friend in her contacts list—and yes, writing on his wall too. “I lost a school friend I had recently reconnected with through Facebook, and at first, it freaked me out to see people talking to her on her wall. It didn’t seem right and I wondered if there was, in fact, some perverse pleasure in dwelling on tragedy.”

But losing colleague Pankaj Advani—also a recent Facebook friend—to a heart attack last month saw Bela cast her apprehensions aside. And so, among the many scrawls on Pankaj’s wall, there’s Bela’s too. “It’s not just a personal loss. On a professional level, going back to Pankaj’s profile is like revisiting his independent spirit as a director,” she reasons.

For Vishwajyoti Ghosh, dropping by at his filmmaker friend Sourabh Usha Narang’s wall is like revisiting their shared childhood. Sourabh died of cancer in June. On what would have been Sourabh’s 38th birthday, Vishwajyoti, a communication consultant and graphic novelist based in Delhi, sought out his friend of 20 years from his well-populated contacts list, to write: “There hasn’t been a day when i haven’t found myself in a conversation with you...u have left a little bit of sourabh in each one of us...miss you.”

The irony of having a forum for unrestrained communication and yet being able to go only so far and no further is not lost on him. “Facebook does offer a means of reconnection, but it is also a reaffirmation of the brutal fact that he/she is no more because there is no interaction from the other side,” he says. On a networking site, however, communication must go on. As Vishwajyoti goes on to explain, “The connection then starts among people who knew him/her, which makes it a living wall rather than a tombstone.”

“A connection starts between people who knew the person, making it a living wall than a tombstone.”
Vishwajyoti Ghosh, Graphic novelist

Author Sarayu Srivatsa had something similar in mind when she clicked on that final “save” button to create a live account for her companion, writer Dom Moraes, who died in 2004. “I wanted this to be a space where writers could interact with each other. Many of them talk to me through Dom’s wall,” says Sarayu, recalling how the initial friend requests—accompanied by a black-and-white photograph of the young Moraes and his son—startled their recipients, including writer-historian William Dalrymple (“I got the shock of my life,” he’d said). And possibly, it was not only because Moraes had passed away years before: the writer was also famously private and technology-shy.

“A lot of people are keeping up the pretence that he is still around, which is what I wanted,” says Sarayu, whose status updates for Moraes are usually YouTube clippings of readings of his favourite writers’ works.

Another YouTube link laden with memories is posted on a memorial page created for cyclist and restaurateur Homi Bhathena by his friend Ashwini Dasgupta Khare. It’s Louis Armstrong’s What a Wonderful World, and to everyone who knew the jazz aficionado, it is a constant reminder of the many times he would take up the mike to sing it out loud. Sitting in her Pune home, the venue for countless get-togethers with Homi’s family, Ashwini says, “I chose the profile photograph for the page, called ‘In Memory of Homi Bhathena’, from my anniversary party here.”

In faraway Jeddah, Jonaid Bin Tajuddin Mohammed, CEO and chairman of a management consulting company, did some photo sorting of his own the day model Viveka Babajee passed away. “Viveka was like the sister I never had. I heard that her mother was planning to close her Facebook profile and thought of creating a fan page for her,” Jonaid says. Seven months down the line, Viveka’s eponymous page, complete with pictures, videos and discussion forums, has got an overwhelming 2,000-plus members. “Many of her friends have added me.... They helped me cope with her loss,” reveals Jonaid.

Sometimes, the memorial page itself works as a “coping mechanism”, as clinical psychologist Dr Aruna Broota calls it. Rishu Mishra, a 23-year-old student from Jammu who put up a Miss You page for an uncle she lost recently, couldn’t agree more: “Whenever I miss my mamu, this page becomes my refuge.”

Facebook, in fact, allows for profile pages to be memorialised when their users are no more: status updates are removed and no one can log into the page, though friends can still leave messages—messages in which emotions aren’t held back. In the intensely private realm of dealing with death, expressions of condolence have gone unusually public—a function, Broota says, of our collective virtual and public existence. “New technology is being tapped to vent stress and loneliness,” she says. “But it isn’t really healthy. It shows that you have not been able to come out of your grief. It signals depression and lack of trust in people around you. So you continue to bond with someone who’s gone, and don’t let go.”

She only voices the misgivings Bela felt when she first encountered the virtual vestiges of her friend on Facebook. It took some getting used to, but she has finally arrived at a reconciliation between the urge to hold on and the need to let go. “A heartfelt wall post, in this day and age, certainly touches a deeper chord than uttering a mechanical ‘I’m sorry for your loss’ on the phone or on a visit. It’s like laying flowers on a grave....” Which is still, unarguably, the most spontaneous token of remembrance, whether real or virtual.