A Question Of TheHeir & Now

Rahul has won Battle '09 for Congress. But will he carry on the war? 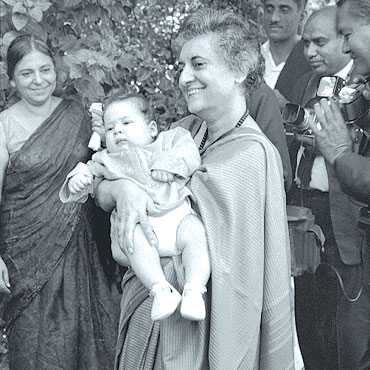 "It is undemocratic that the Congress is still led by a Gandhi. But it’s the reality.... My position gives me certain privileges. It is a fact of life in India that success in politics depends on who you know or are related to. I want to change the system."

"Poor people are the people who will make India great. India's powerhouse is not in the cities, not in the metros. It lies in the villages."

"If anyone from the Nehru-Gandhi family had been active in politics then, the Babri Masjid would not have fallen."

"I belong to the family which has never moved backwards, which has never gone back on its words. You know that when any member of my family had decided to do anything, he did it. Be it the freedom struggle, the division of Pakistan or taking India to the 21st century."

"Communism has ended in the rest of the world. Is this a new form of Communism in Bengal?"

"My father Rajiv Gandhi used to say that only ten paise out of one rupee reached genuine people, but I say that the needy people still get 10 paise out of Rs 100 under the central development and welfare schemes."

In 1991, a few months short of his 21st birthday, Rahul Gandhi occasionally accompanied his father Rajiv Gandhi on what would be the latter’s last election tour: he was assassinated while campaigning in Sriperumbudur. Three years later, a Raul Vinci doing an MPhil in Development Studies at Trinity College, Cambridge, would sometimes refer obliquely to that campaign in his tutorials. "He would say, I believe this is what happens in India," recalls an associate from that time. "His interventions revealed an understanding of the diversity of India other students did not appreciate. He would cite examples of what happens on the ground—something he had learnt not from books but from lived experience."

Of course, barring his tutor, few then knew this MPhil student was Rahul Gandhi. The assassinations of grandmother Indira and father Rajiv in 1984 and 1991 respectively had compelled him to assume the Vinci pseudonym. His essays, these sources said, were just "average and clearly written in a hurry", but he more than made up for it with his quick grasp of issues and active contributions to discussions. He concentrated on trying "to draw implications from the concepts and theories" that he was being taught. He may not have been cerebral, but it was evident that he was interested in politics.

Rahul demonstrated that same desire to understand how theory worked in practice almost a decade later, when he joined active politics in 2004 and interacted with academics, civil servants or senior party functionaries. If he visited retired IAS officer N.C. Saxena (a member of the last government’s National Advisory Council) to learn more about UP and its problems, he met Professor Sudha Pai of Jawaharlal Nehru University in New Delhi several times to get a grip on Dalit politics. Rahul even sat through a two-day seminar at JNU on the political and economic changes in UP in the ’90s. Asked after one such session whether he believed that the Congress needed to reinvent itself in UP, he said, "Yes, the party does need to reinvent itself. But it must be done on a sustainable basis. There must be a long-term plan, not something worked out in a hurry."

That long-term plan seems to have come good in Election 2009, where the Congress has not only outdone itself by winning 21 seats in UP, but also defied all expectations by crossing the 200 mark in the Lok Sabha for the first time since 1991. Suddenly, all that Rahul has been working for in the last five years—understanding India, democratising the party, concentrating on development issues—has come together. As the face of the Congress campaign, he galvanised the youth vote in support of the Congress, perfectly complementing Prime Minister Manmohan Singh. His momentous decision to contest the elections in UP alone—in consultation with party general secretary Digvijay Singh — might even see the party on a comeback trail in the state after the false start in 2007, when the Congress won just 23 of the 403 seats in the UP assembly, a loss of two seats from its 2002 tally. Suddenly, all the gaffes of the past are forgotten, including the most controversial one, when Rahul declared: "Members of the Gandhi family have achieved the goals they targeted like the freedom of the country, dividing Pakistan into two and taking the nation into the 21st century." Suddenly, all the doubts that Congressmen were beginning to express towards 2007-end—after the dismal UP results—have vanished. In fact, at the Congress convention in New Delhi’s Talkatora Stadium in 2007, two months after he had been appointed party general secretary, Congress delegates had, for the first time, demonstrated a certain impatience with Rahul, and expressed their disappointment with his speech, which they said was short on the inspiration quotient.

What exactly has Rahul done in the last five years that changed his image and rejuvenated the party? To begin with, he worked with the realisation that this wasn’t the Congress of the ’80s, which his father had inherited at the height of its powers. The party had to be rebuilt "brick by brick". If mother Sonia had brought back self-esteem to the badly battered Congress in the wilderness years of 1996-2004 (when it was unable to cope either with identity or communal politics), Rahul worked at bringing back self-belief to the Congress, looking for "potential", not just "loyalty". No wonder then that of the 10 YC/NSUI members he handpicked for the elections, eight won, with the relatively lightweight Manick Tagore even posting a shock win against the MDMK’s Vaiko in Tamil Nadu.

"In 2007," says senior party leader Salman Khursheed, who won the Farrukhabad seat, "the Congress came out of the ICU and was given vitamin shots. This time Rahul gave the party the adrenaline rush it needed to power us to this result." Abandoning the road shows, which allowed him a certain freedom, he opted instead to address some 100 rallies this time and 75 of the candidates he canvassed for won.

A complete natural on the campaign trail, Rahul thought little of breaking the security detail to try and physically connect with people. Security is something he has learnt to live with since he was 14, after his grandmother’s assassination. An old schoolmate at Doon School recalls how the institution had asked his parents to take him away as the authorities found the security around him distracting for other students. At Cambridge, too, Rahul found it tough living under an assumed name and often told those in the know that he found the presence of the MI-5 shadow irksome. In the running: En route to a rally in Amritsar

But revolted as he was by the experience, it also shaped him. He reportedly reacts far more sharply to violence than his father or grandmother did, particularly to communal violence. At a recent interaction with some journalists, Rahul had a good word for almost all opposition politicians, saying, "I dislike very few people." The only politician who he reacted sharply to was Narendra Modi: "What can you say about a man who was responsible for 3,000 deaths?"

Eventually, though, Rahul seems to have learnt to ignore security. In 2004, for instance, he arrived for a rally in Farrukhabad by helicopter. Instead of waving to the crowds straining against wooden barricades from a distance and getting into the waiting vehicle, he walked the length of the barricade, pressing flesh as garlands were tossed at him. Local Congress workers who weren’t behind barricades and had been asked by the police to stand in a neat line suddenly realised that if they continued to stand politely, they might not get their turn. All hell broke loose soon after and in the ensuing stampede, some barricades broke. Rahul, enjoying every moment, was swept away by the crowd, leaving the SPG and the local cops to deal with the nightmare. This election too, Rahul plunged effortlessly into crowds, reaching out to the Muslims, women and youth who turned out in thousands at his rallies.

But, it has certainly not been easy. Rahul Gandhi’s five-year-long political initiation has been a baptism by fire. An object of adulation within the Congress, he has been the subject of derisive jokes in opposition circles. He receives the due ‘Gandhi family’ reverence in a large swathe of rural India and connects easily with the youth. But in many parts of urban India, he is contemptuously dismissed as the latest member of the Dynasty. Before the election results came in, his praise of Bihar chief minister Nitish Kumar was read as politically naive; after the elections, it was hailed as a sign of political maturity. The voters of Amethi regard him as their yuvraj; the Youth Congress in the constituency has yet to accustom itself to his managerial style and his disapproval of favour-seeking workers.

Election ’09 has proved some of his worth. Congress president Sonia still remains the dominant power in the party. But in the last year—and especially in these elections—she has begun to recede slowly into the background, bringing her son centrestage. Can Rahul take the success of 2009 a step further in 2012, when assembly elections are due in UP? Can he replicate it in neighbouring Bihar? A revival in the Hindi heartland would mean an end to coalition politics. Can Rahul inject accountability, the merit-over-loyalty principle in the party? Can he rid it of powerbrokers? Can he convert goodwill into votes?

His long-term view is far from over. Asked at the interaction with journalists why the party had not flagged its social welfare programmes adequately with the electorate, Rahul said, "Let us forget there is an election," he said. "Then what should be our approach? One model is the private sector, India Shining. The people have already demonstrated their silent resistance to this idea. The other model is growth with distribution, that is, Rozgar Guarantee, food in schools and RTI. This is inclusion not just of the poor but also of the middle classes. That is the idea of the Aam Aadmi."

What about the importance of being RG, as he is referred to in party circles? It’s something he is conscious of. Asked at the press meet whether he was aware of the contradiction in his being a member of a political dynasty and his drive for democratisation in the party, Rahul, sitting on the lawns of his Tughlaq Lane residence, took the question head-on: "I agree it’s a paradox. But I have got this opportunity. I could say I don’t want it. I’m saying I want to work for this country, let me try to steer it in a positive direction." As Jairam Ramesh put it, this is "not a 100-metre sprint champion but a marathon man".