In the light of true events, and some partly-fictionalised letters, a truth about the Mahatma 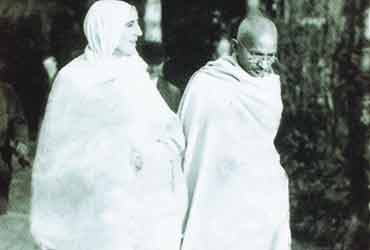 Mira And The Mahatma
By Sudhir Kakar
Viking/Penguin Pages: 280; Rs 395
Sudhir Kakar's Mira and the Mahatma is a love story, made all the more poignant by the agony it caused both the Mahatma and the daughter of an English admiral who came so close to him. Much of the story is told in the Mahatma's own words, in the letters he wrote to Mira (aka Madeline Slade). The events for the most part are hard facts. They are woven together by Mira's letters and diary entries, most of which are fictional. The story is taken up by her Hindi teacher in whom I assume we hear the voice of the author. But it is not an intrusive voice. Although Sudhir Kakar is a psychoanalyst, he leaves us to analyse Mira and Gandhi.

This account defies the current wisdom, which says that without sex a love story won't sell. In only one incident is there any suggestion of Mira displaying her emotion physically. It's a story of honesty and openness, with Gandhi never hiding his love for Mira or the pain it caused him. Once, after ordering Mira to keep away from him, he wrote to her, "This is merely to tell you I can't dismiss you from my mind. Every surgeon has a soothing ointment after a severe operation. This is my ointment." He goes on to say that sending her away was "part of the operation". In another letter, he is brutally honest in telling Mira that she is infatuated with him but at the same time honest in admitting that his understanding of their relationship may be wrong.

Honesty pervades the whole story—an honesty which does not evade any of what many regard as Gandhi's eccentricities or even follies. We see the Mahatma poking around with a stick in the faeces of an ashram inmate to discover what food had not been digested. He is heard warning against involuntary discharges of semen at night, which I would regard as a perfectly natural phenomenon. His concern with his own purity, which many today would regard as morbid, is not hidden either. Nor are his dietary fads or his prescriptions for illness which seem to ignore all modern medical knowledge. Yet Kakar's Gandhi is supremely relevant for today.

He is relevant because he is a politician who never put politics before principle. He would have deplored the opinion polls and focus groups which make politicians followers of public opinion, not leaders. He would have had no time for the spin and sound bites which politicians use to deceive rather than inform the electorate. But he was a master of communication himself—Kakar describes the Congress leaders' failure to realise that defying the Salt Act was a stroke of genius. Today's politicians, just like those Congress leaders, could learn lessons in communication from Gandhi. They could also learn that sticking to your principles is not political suicide. Gandhi remained a force in Indian politics until the day he died. Today he still commands more international respect than almost any other 20th-century global figure.

But what about non-violence? Is that still relevant when we are told terrorists have declared war and we have to fight back? The Mahatma tells the revolutionary Prithvi Singh: "Armed conspiracies against something satanic are like matching Satan against Satan. An eye for an eye will surely make the whole world blind." Those are words advocates of the "war against terrorism" should think about as well as their enemies. But Gandhi's non-violence didn't imply accepting evil. He believed that his programme had "awakened the masses", and that while movements against evil were necessary, "a movement in which masses have no active part can be of no good." Today politics almost everywhere is characterised by a lack of mass participation, by a distrust of politicians, and voter fatigue.

Kakar's Gandhi is honest enough to admit that he has difficulty in controlling the violence within himself. He slaps one of his devotees, and is sometimes angered by Mira. But he acknowledges his failures, repents, and gentleness replaces anger.Some of the most moving words in this account are in the letters he wrote to Mira after being harsh on her. He is gentle enough to take upon himself the burden of awakening the inner voice of others. He regards himself at fault when other inmates of the Sabarmati Ashram fall short of the standards he sets.

Kakar's Gandhi is a guide to the perplexities, both personal and political, of today. But he doesn't ask for blind obedience. He is honest, so admits he can be wrong. He only asks us to be honest to ourselves. But then the anguish Mira and he suffered for their honesty shows how painful that can be.