"A Public Sale Option Is Better While Divesting Blue-Chip PSUs"

The former chairman of the Disinvestment Commission explains how the government can get out of the current imbroglio. More Coverage 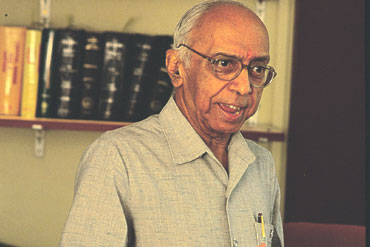 outlookindia.com
-0001-11-30T00:00:00+05:53
Despite the prime minister's assurances, the disinvestment of oil PSUs seems to have hit roadblocks. Now, government sources contend that a decision will be announced just after Diwali. But with disinvestment minister Arun Shourie coming under fire for selling some prime hotel properties at cheap prices, one can expect more delays. G.V. Ramakrishna, ex-chairman, Disinvestment Commission, who can easily be dubbed the father of India's privatisation process, airs his ideas on how the government can get out of this imbroglio. His solution is to create a National Shareholding Trust (NST) to dispose of these assets to ensure fair value to the seller and the taxpayers, and not to follow the strategic sale route in an indiscriminate manner. Excerpts from an interview with Vatsala Kamat:

What do you have to say on the recent brawl over disinvestment?
The hype and commotion over HPCL and BPCL is a triumph of politics over economics and theoretical economics over practical common sense.

What is your solution for the HPCL and BPCL imbroglio?
Well, the Disinvestment Commission (DC) recommended that an NST be formed. The government should sell 5 per cent of its stake in HPCL and 16 per cent in BPCL to the Indian people and/or institutions. This will reduce its holding below 51 per cent in both the firms. Selling shares to the public and employees was followed in many cases in the UK. They called it shareholder democracy and shareholder citizenship. But the public should know that there will be no government control and interference even though it is the largest shareholder.

After the initial sale, the government should transfer the balance shares held by it to the NST, which could then hold and dispose the shares to get the best value. Singapore has successfully followed this route; the government shares are entrusted to Temasek, the holding company, which manages the shares and sells them. The NST could also hold 26 per cent in each PSU to prevent clandestine takeovers by private parties.

Who should manage the NST?
The NST should have 5-6 eminent persons of integrity with experience in finance, administration and management. The finance secretary and disinvestment commission chairman can be on the board which can be registered under Section 25 of the Companies Act. It can also appoint the best managers comparable with the private sector, which will provide incentives or disincentives for performance. In the case of Temasek, its board comprises bankers and other experts including government officials.

Do you think markets have the depth to absorb sales of the shares of blue-chip companies?
Yes. Two years back, the capital market raised over Rs 20,000 crore. Bank deposits grew by over Rs 20,000 crore a year in the last two years. And there is a lack of good shares for investors to invest in.

Do you think public sale is a viable option?
The DoD should realise that a public sale option is suggested only in a few cases of blue-chip PSUs that are important to the economy, the consumer and national economic security. For the other 50-60 PSUs, the DoD can follow the strategic sale route.

How should PSUs be valued and should strategic sale be given up?
Disinvestment should aim to maximise revenues which can be put to good use. See, investment advisors calculate the net present value (NPV) on a static basis on assumptions of current working conditions of the underpaid, unimaginative, demotivated management with backseat driving by the ministries. No wonder they are poor performers and calculations based on this give a low NPV; so the reserve price is low and bids too are low. Shouldn't we have a dynamic concept of calculating NPV? Land and other assets should be taken into account.

At the same time, if the DoD adopts a strategic sale route indiscriminately, it will encounter opposition from other ministries. In the case of IPCL, the DoD has promoted a monopoly by giving it to Reliance against the advice of the Commission. The legitimate objective of the ministry should be to keep the identity of HPCL and BPCL to ensure better competition. It should not strive to perpetuate control over these companies; in fact it can strengthen its case if it gives up control. This move will enhance market value of the shares too. The ministry will be on weak ground if it projects itself as anti-disinvestment and anti-private sector; the government will not be able to realise the full value of the shares.

'MLAs Should Select Their Leader'