A Primary Textbook in Resident Evil

It was with hopes for a better future for her daughter that Lata Bai Markam had sent her to a government-run residential school in Kanker’s Jhaliamari village three years back. She probably doesn’t forgive herself today for making that decision. It was in this rented mud hut that her daughter, along with 10 other tribal girls, was raped by a teacher and a guard at the school. “She did seem a little lost over the last three to four months but never mentioned anything about what was being done to her,” says Markam of Devri village in Kanker block. “Please bring her back,” she pleads, asking for the guilty to be hanged.

The girls have been kept at an unidentified location, away from their parents, to protect their privacy. Dulshia Korram, the mother of another victim, who was in class two, doesn’t even have enough money to find out where her daughter is and only knows that she has been sent to a better hostel. Medical tests have confirmed the girls were raped. 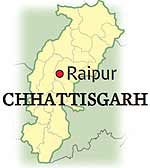 Not just the accused, even the village panch had asked the minor girls not to say anything.

This too is a story that has unfolded deep in the heart of rural India that Mohan Bhagwat believes is free of the affliction of ‘western vices’. According to Tularam and Sheelo Korram, parents of another victim, the village panch Kachru Kunjam and the two accused had ordered the girls not to reveal anything to anybody. Now, however, this nondescript village, with a population of just 500, has suddenly drawn in representatives from the national media and higher authorities. Not to any great illumination. Local BJP MP Ramesh Bains came visiting and said rape of adult women was “understandable” but this was too much. He’s wrong. Locals say no one would have noticed the rapes of the tribal girls earlier but after the furore over the Delhi gangrape every rape now is making big news. Tribal women, they add, have been raped for years with no one noticing or caring.

As more details emerged of the latest rapes, following a report filed by the local women and child welfare officer for Kanker, Shail Thakur, former Congress CM Ajit Jogi claimed that one of the girls, just 10 years old, had become pregnant and had committed suicide. But Kanker collector D. Alarmelmangai denies this, saying the girl died of jaundice and typhoid. BJP MP and adivasi leader Nand Kumar Sai says, “In a state whose 32 per cent population is tribal, this is not the first instance of atrocities against tribals. The President must intervene in this latest crisis.”

Not far from the state capital, the twin towns of Durg-Bhilainagar, an urban agglomeration with a population of almost 10 lakh and set to become the state’s education hub, is being billed as the country’s “rape capital”. It has the highest number of rapes per 1,00,000 persons. According to ncrb figures, the area recorded 5.7 rapes per 1,00,000 people in 2011 as against 2.8 rapes registered in Delhi. The rate was 1.1 for Bangalore, 1.2 for Mumbai and 0.3 for Calcutta.

This is an area where a war has been waged and rape has often been the weapon men have used to fight that battle. It is at the heart of an India—quite an “ancient” India—that is brutish, nasty and terribly violent to the weaker sex.