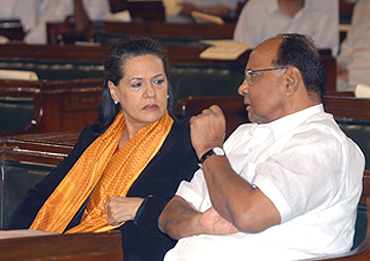 Instead of reaping the gains of working together as coalition partners for five years, the Congress wants to return to the pre-2004 position—the UPA came into being after the elections. This stand has created heartburn among some of its allies, one old, and one new—the NCP and the SP. The NCP, after all, agreed to give the Congress the chief ministership after the last assembly polls in Maharashtra, even though it was the larger party. And the 39-MP-strong SP rescued the UPA government last year after the Left parties withdrew their support over the Indo-US nuclear deal issue.

The NCP is driving a hard bargain: unwilling to accept the 27-21 seat-sharing formula in which it gets the smaller share, it has opened up talks with the Shiv Sena. Of course, an NCP-Sena alliance is fraught with problems as it could lead to a split in the NCP. NCP supremo Sharad Pawar wants support from the Sena for his long-held prime ministerial ambitions in the post-election situation, especially as none of the three combines in the fray—the UPA, the NDA or the Third Front—look set to secure a majority.