A Pocket Globe In The Backyard

Touch base with the dream: a hi-tech zero corruption zone sans the bureaucratic hassles 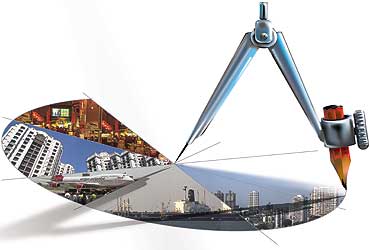 Just walk into this magical kingdom. A 250 sq km urban fantasia on the Gujarat coastline that's one-and-a-quarter times the size of Chennai, yet only 445 km from Ahmedabad. It's an integrated investment hub a la Singapore with a world-class infotech backbone and transport linkages. It's a special economic zone (SEZ). It's Positra.

Or touch base at the international air gateway—only 70 km from Delhi's igi Airport—circa 2012 and drive straight down the multi-lane expressway for the Greater Noida SEZ. A zero-corruption zone minus bureaucratic bottlenecks, and a huge catchment area has thrown open immense potential for low-volume, high-value business. This is the modern metropolis, replete with industrial and residential ventures.

Taking a cue from the classic 'if you can't beat them, join them' aphorism, Maran's dreaming almost the impossible—replicating the Chinese SEZ model in mainland India. What's surprising, this time, there are many who have bought the dream.

By definition, an SEZ is a specifically-delineated, duty-free enclave (preferably at least 1,000 hectares with minimum 25 per cent land segregated for industrial activities) that will be deemed as foreign territory for the purpose of trade operations and duties and tariffs. The absence of FDI caps on manufacturing and infrastructure is likely to guarantee that global promoters/developers set up shop. While they'll provide the superior skeleton, their pay-offs come from outright sale or leasing space and the myriad user charges for the facilities. To top it all: a development commissioner providing a one-stop full operating permit. Ergo, the perfect environment for hassle-free business.

Other than the leitmotif of net forex earnings through export promotions and FDIs, by isolating the SEZ from domestic compulsions, a truly efficient regime can be conceived. Moreover, such "growth embryos"— with global benchmarks—will inevitably generate a powerful demonstrative effect nationally. "If just one or two SEZs can create a truly competitive environment, the pan-Indian implications will be phenomenal," says Nasser Munjee, CEO, IDFC.

The limited success of our export processing zones (EPZ) also compelled Maran to push his grandiose SEZ scheme. Saddled with complex procedures and pitiable infrastructure, exports from the eight Indian EPZs totted up a dismal Rs 8,552 crore or just 4.3 per cent of the total export basket. Likewise, the investment in the seven public sector EPZs was a piffling Rs 17 crore a year. "Compared to the Chinese SEZs, the contribution of our EOUs and EPZs in Indian exports is around 12 per cent only which is extremely low in comparison," says Maran. (See interview)

Government mandarins of course harp on the Indian elements that have found their way into the SEZ blueprint—namely, the private sector in infrastructure for optimising output and the leading role of state governments. The Centre, working in tandem with the states, will only assist in policy framework and create windows in the existing Acts until separate central and state legislations are passed. "Our SEZs will only bypass the infrastructure, regulatory and macro-economic rigidities...the non-monetary inputs are equally significant," says D.K. Mittal, joint secretary, commerce ministry.

Maran's ginger group is working overtime to set the pace with the Centre coming up with a framework to support private investment. Carrying on from where this year's Budget had left off, the recent exim policy has enhanced the income-tax benefits to exporters in SEZs. The units can now easily access cheaper funds as banks received the green signal to set up offshore banking units (OBUS) offering much lower interest rates than their counterparts within the country."It's a path-breaking concept," says Maran. "The benefit is that they'll not have to meet the SLR, CRR requirements, which will enable them to lend cheap to exporters."

The regulations for ECBs have also been relaxed and central sales tax exempted in case of sale from domestic tariff areas (DTA) to SEZs. It's a windfall, if you also include the permission to SEZ units to hedge freely in commodities.

Naturally, riding piggyback on such stimuli, both private developers along with state government bodies like CIDCO in Maharashtra or the Greater Noida Industrial Development Authority (GNIDA) have lapped up the offerings. Till date, 13 new SEZs have been approved while four EPZs have been converted into SEZs. The euphoria overrides the apprehensions that are fuelled by the lack of a clear-cut SEZ policy. These are gigantic projects with long gestation periods, risky returns and are perennial cash-guzzlers, yet the developers remain bullish. "No risk, no game. And no risk, no gain," quips Rajendra Singh, chairman, Positra SEZ.

Finally, there's a shift in the policy approach with the Centre being only the facilitator, feels C. Sreekumar, associate director, KPMG Infrastructure Advisory. "The states and the private sector are the key drivers but the intentions reflect that eventually SEZs will be led by private initiatives in development and implementation. The state will only promote the zones."

Along with the incentive package, the assumption that the industry will flock to infrastructure has added to the excitement. Based on the success of global SEZs, the expectations that these islands do attract investments are also high. In Taiwan, between 1967 and 1998, the net export value contributed by its economic zones was a whopping $28.5 billion.

The explicit export focus notwithstanding, the procedural freedom is also beneficial for importers, throwing up hidden opportunities for import-oriented trading activities within the SEZs. With reservation non-applicable within, scale economies can also be implemented in ssi units. Adds P.G. Ganapathy, ED, Feedback Infrastructure: "FDI in retail, otherwise disallowed in India, can flow into the SEZs. With some coming up close to metros like Mumbai or Delhi, there are immense opportunities."

Striving towards the same objective does not necessitate identical positionings. And the SEZs have already roped in international consultants to draw up the strategy blueprint and revenue models. While the Gopalpur SEZ in Orissa will focus on mineral-based industries, for Greater Noida, it will be agro-processing, software, warehousing. Anil Lakhina, MD, CIDCO, would love to morph Navi Mumbai into a manufacturer of engineering goods and a trans-shipment, trading and logistics base, similar to Dubai's Jebel Ali.

The sheer size, however, is forcing the developers to adopt a phased approach. For example, basic infrastructure across 60 sq km will first be offered in Positra by 2005. The promoters, including Sea King Infrastructure Ltd, the Gujarat Industrial Development Board, and Sumitomo Corporation, Japan, may build some residential blocks but would prefer to rope in strategic investors to put in place the social infrastructure.

Look at the costs. The total project cost in Navi Mumbai is an estimated Rs 5,800 crore. Positra's investment in Phase I alone is Rs 5,626 crore with a debt:equity ratio of 2:5. It eventually is likely to touch Rs 30,000 crore by 2012. That is roughly equal to the biggest private sector investment so far at a single location in India—the $6 billion Jamnagar refinery complex of Reliance Industries—and you'll realise the proportion we are talking here.

The Navi Mumbai SEZ is already a fast-growing township."We are the best property in the country, and we're close to a port," says Lakhina. Still, the company is hunting for an experienced strategic partner who will infuse $100 million in equity and $750 million in project finance. CIDCO will keep 26 per cent eventually and offload 74 per cent to strategic and other financial investors.

Internationally, such projects have been set up with social capital but the Indian government has strictly stayed out of financing. And organising money by pure private endeavour is extremely challenging. There are options—international capital, capital markets, FIs—but the banks also have limited appetite for long-term project financing. "We must develop a deep debt market for corporates and government refinancing is a must," says Rajendra Ganatra, GM, IDBI. Even a special development fund would be welcome. But commercial success, according to Ganatra, can lead to exponential growth in valuations. And the chance to share in the upside can attract lenders for quasi-equity instruments like convertible loans or bonds.

But the money that has moved in is early equity. Only when the policy crystallises will the game begin. But key queries remain and the obvious limitations in the policy call out for attention. To begin with, exports alone cannot be the growth engine. "To become successful, SEZs have to become a platform for the huge domestic market as well. There are export locations far more attractive than us," says Munjee. The "I" in FDI is actually most crucial, feel economists.

Then, of course, there is the issue of the political commitment—an eternal victim of populism and vested interests. For SEZs, it may become more difficult as reforms will be essential even amongst local bodies. There's also the question of labour reforms that will be necessary before SEZs take off. Says Maran: "We have asked the states to treat SEZs as public services, and even Kerala has accepted this."

There are other worries too. For instance, is there sufficient global demand for such huge prime industrial space and relocation of millions in the middle of nowhere? The services sector is the real pusher in the new economy but they are hardly space-intensive. A shakeout is inevitable. Sums up Munjee: "A dozen SEZs is a ludicrous idea. Post the initial rush, only one or two will survive."

Will dreams die young or will passion see it through to the end of the day?