A Plate Of Souvlaki At Sowcarpet

Chennai, home to an urbane, cosmopolitan prosperity, gets a global explosion in taste 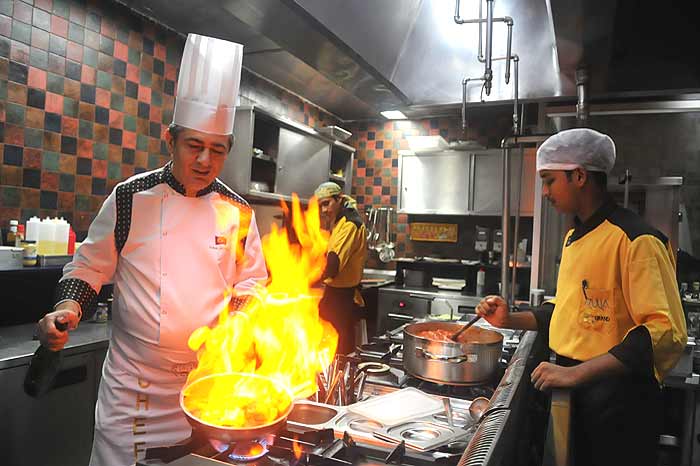 Kebabs and kefte roll off the interactive kitchen at the swish Kryptos on Chennai’s fashion avenue, Khader Nawaz Khan Road. On a hot and humid Tuesday afternoon, lunch is in full swing in the large, rectangular 64-cover dining area lined with three kinds of hand-crafted walls—firebrick, metal and wooden. A group of spiffy young women, who have selected this Greek restaurant that opened a few months ago for their afternoon of food and chatter, are poring over a menu of meze, souvlaki, fasolada and gigandes plaki. For most in the crowd, not many dishes ring a bell. But that is precisely why they have chosen to be here—to try, test, acquire and grow their culinary character. And that is precisely what Chennai’s foremost and full-fledged Greek restaurant is cashing in on.

Nearby, on the busy Nungambakkam High Road, at Dahlia, a Japanese restaurant huddled in a rundown shopping complex, every day between noon and 2.30 pm, business is brisk. In 1993, a seafood exporter, Naoki Yamauchi, and partner Revathi Nagaswami started Dahlia to cater to the small but growing Japanese population in the city. But now it finds that there are more Chennaiites than Japanese gorging on its home-style traditional dishes of sashimi, sushi, udon, soba, ramen.

Chennai, once known for its conservative palate, has plunged into a culinary culture that now boasts of a cavalcade of cuisines and flavours from across the globe. Its ripple effect is perceptible among foodies, many of whom saying pita, sashimi and wasabi, for instance, in the same breath as idli, sambar and vadai. In today’s Chennai, home to a manufacturing and IT hub, and an equally eclectic expatriate population, hummus is haute, kimchi the new cool.

‘A growing frat of chef-driven and stand-alone eateries is welcome in a city labelled conservative.’
Geeta Doctor, Food critic and writer

“I think what is at work is that chefs are not looking at ‘Indianising’ global food; they are adhering to creating dishes that are original in form and the city is loving that,” says classical musician and foodie T.M. Krishna. He adds that as long as the world-food restaurants stick to their USP of sourcing their ingredients and spices from various parts of the globe for the authentic flavour, they will be a hit. Agrees chef Rajesh Radhakrishnan, director of food production at The Park in Chennai: “It’s not only expats, but people in general, too, have become more adventurous with menus and food choices. Thankfully, the availability of ingredients has also become better—you can now go to a store and buy premium Norwegian or Alaskan smoked salmon or extra virgin olive oil. The city’s palate has most certainly matured.”

Not surprisingly, when the well-travelled Ethem Aydemir, the Turkish executive chef, speciality cuisines, at GRT Grand, arrived in Chennai six months ago to take over the hotel’s ethnic and eclectic Mediterranean restaurant, Azulia (winner of the Miele Guide Award for being among the finest restaurants in Asia in 2010-11), he was pleasantly surprised at the city’s knowledge and appreciation of Med food. Dishing up the best of cuisines from across ten countries that border the Mediterranean sea, Aydemir says Azulia’s customers “know exactly what they are looking for. They’ve been and eaten at the best of places in the world and are demanding that same quality”. Vipin Sachdev of Pink Papaya Foods, that runs Kryptos and the Italian restaurant Tuscana Pizzeria, says, “People want to try different things and that is what we cater to.” 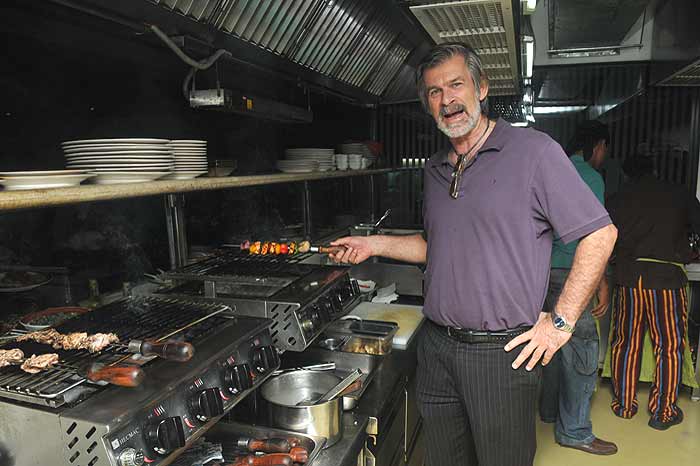 Kryptos came into being after Chef Will Wilson, counted among the city’s trailblazing and talented chefs, returned from a trip to Greece last April. “Chennai was already warming up to Mediterranean food,” says Chef Willi, as he is called. “I felt it may be a good idea to create a stand-alone restaurant that essentially served food from Greece, particularly the west of Cyprus.” In terms of footfalls, Vipin admits Kryptos could do better. “But look, not everyone knows Haloumi (a traditional Cypriot cheese), many think it’s a paneer that has gone wrong; so our job really is to educate our customers and get them to acquire a taste for it.” Food critic and writer Geeta Doctor agrees with him and is excited about this new trend. “It’s also heartening to see a small but growing frat of chef-driven, stand-alone restaurants that serve world food. It’s a welcome trend in a city that has always been labelled conservative in its eating-out habits.”

But it’s not easy to get lips smacking in a city that has rigid eating habits and doesn’t change readily. Regi Mathew, of the recently opened Japanese restaurant Teppan, says the challenge is to make global cuisine a “way of life” with the city. Teppan (or grilled plate in Japanese) opened after nearly two years of focussed research and study of eating habits in Chennai. It hit upon the idea of set menus, to save first-timers the trouble of wading through names they may not be familiar with. So the restaurant has four large teppanyaki counters, one of which is exclusively for vegetarians; the other options are meat, seafood and Teppan’s special. Chef Rennetto and his team rustle up a whole range of dishes in each of these set menus from a salad, a starter, soup, main dishes and rice. Then there are desserts—from the in-house Wasabi mousse to a green tea ice cream. “Our premise at Teppan is to serve cuisine that is authentic to the region but from a range that is best suited to the Indian palate,” says Rennetto.

That palate is ready to savour new tastes. Inseoul, a Korean restaurant in Alwarpet, primarily began to cater to the growing Korean populace in the city, thanks to companies like Hyundai Motors setting shop near Chennai. It is a traditional Korean eating place, with a barbeque on every table, with options for floor-style seating and private spaces. As Sam Yuel Park of Hyundai Motors says: “The restaurant imports its ingredients from Korea; as a result the tastes and aromas unique to our cuisine are maintained.” But in the last seven years it has been open, more and more Chennai residents have become part of its loyal clientele. Soon, Korean food caught on in the city, and now there are five specialised Korean eateries. Seu Jae Gul, who started Inseoul, says: “That, in itself, is a testimony to the city’s changing tastes. And the mixed groups of people who flock to our restaurant regularly—the Koreans usually like to eat in private and prefer the room-like spaces here, whereas the Indians are open to sitting on the floor and trying out Korean food.”

Amid all this, Chennai’s old south Indian restaurants, which have stood the test of time, have lost much of their lustre. There are hardly any new ones opening, and some of the old restaurants are putting out the hearth. As Geeta Doctor rues, the flip side of the invasion of global foods is the disappearance of traditional south eateries. “Sometimes I wonder whether, as a result of this huge influx of global cuisine, we are losing our own identity.” That’s a post-prandial debate for another time. For now, let’s soak in the aroma of souvlaki and dig into some sumptuous teppanyaki.

Joy, And The River Of Sorrow