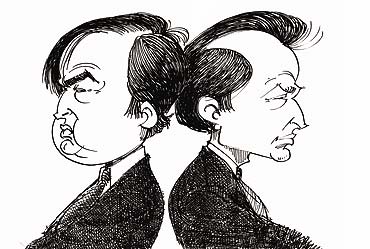 The episode proved another point: despite the split between the two Ambani brothers in June 2005, the confrontation between them continues unabated. Pre-split, it was a battle to "equitably" divide the Reliance empire, but it has escalated into a never-ending war to destroy each another. Admits a Reliance insider: "Mukesh will try to wreck Anil's mega projects, and Anil will leave no opportunity to cock a snook at his brother. Both have huge egos, and they just can't let each other alone. Their destinies are entwined—forever."

An underlying message was that interest groups will play games to pitch one brother against the other. Corporate competitors will take advantage of the sibling rivalry to further their interests. The politico-business battletroops that were once divided into Ambanis vs Others, were being rearranged into Ambani vs Ambani. Politicians, bureaucrats and CEOs are either FOM (Friends of Mukesh) or FOA; even if they're neutral, they have to take sides on issues. For once, it was a reel-life Kalyug plot being enacted in real life. Some dubbed it Brothers At Arms, others called it Ghar Ghar Ki Kahani, a few were even willing to name it Deewar.