A Pink Lady On Ice, Please

Arun, Liz play house, with the paparazzi watching in. So who's Valentina? 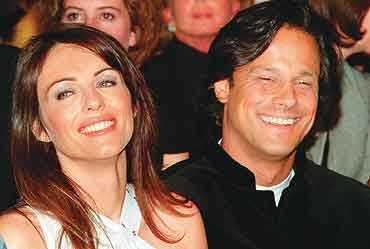 outlookindia.com
-0001-11-30T00:00:00+0553
A few days ago, Mumbai saw Liz Hurley whom an Italian woman called Valentina Pedroni could well describe as the actress who played herself in Bedazzled. She played Satan. Miss Hurley was in the Third World to inquire after the broken leg of someone called Arun Nayar. One day after she left the wounded man's side, his legitimate wife Valentina came down, according to close friends, to break his other leg or at least get metaphorically closer.

Nayar had hurt himself in a skiing accident which, despite its low points, brought home Hurley. Her status in this matter, as the crime section in the Indian press will put it so beautifully, is 'paramour'. The British tabloids understood the words Hurley and skiing. They didn't get 'Arun Nayar'. So for many days, a building called St James Court on Marine Drive was under siege by those English people who are in pursuit of simple truths but are in some rush.

This was Nayar's commodious home. There were knocks on the door and several telephone calls. Mumbai's high society was aggressively pursued by heavily accented calls from across the seas asking for character sketches of Nayar and Valentina. Magazines like People called up Mumbai journalists to ask, "Who is Arun Nayar?" One British paper called him Liz's new "Asian accessory". Shobhaa De told a British newspaper that he was "a non-entity". He is said to be a businessman with some kind of ownership of a computer firm, but like among generations of Mumbai boys who have lived off their ancestral wealth, "I have my own business" is only a better mating call than the truth, "I do nothing".

Though his father Vinod Nayar is known to be an exporter of some standing, it is not clear what exactly his son does. Arun has also been called a millionaire but it's not clear how many millions make this millionaire. His German mother Gunar has said that all this attention should not give the impression that they were terribly rich. That's the picture Mumbai's socialites give too. "Comfortable and stylish" is how they describe his family. "Charming, educated and good-looking" is how they remember Arun. He belongs to the inner circle of Bombay's good times, one of the boys who hung around with Nusli Wadia's two flamboyant sons.

What more can be said about this 37-year-old man? That his first claim to fame is Liz. That he has a jacuzzi on the terrace of his Mumbai home. That his parents are not divorced, but they live in separate homes in Bombay. That his father, whom Simi Garewal calls "man-man", wears Hawaiian shirts and throws theme parties with live bands. That he—the father—is now engaged to an elderly Indian woman based in England. That once when Arun was in Germany as a little boy, he looked at his dark father and asked: "why can't I have a pink daddy too?" That his friends talk about his inexplicable love for all things white that has made him woo an Italian and a Briton so far.

Well, what more can be said about Arun Nayar? Sorry, that's about it. It's one of the most hollow profiles of our times, but to be fair he didn't ask to be written about. A friend who returned from London after having drinks with Nayar says he was having "a good laugh" at the controversy. Socialities who met his father after the news of his son's affair with Hurley say that none of them had the courage to broach the interesting topic. Nayar Sr would talk fondly about many things, but not about his prodigal son.

Arun was married to Italian model Valentina for seven years. She is said to have introduced him to what is called a 'jet-setting' life. She also introduced him to Hurley. "I was kind and sweet to Liz and then look what she does...she goes and steals my husband from me," Valentina said through her publicist and Italian TV presenter Rosita Celentano.Nayar's estranged wife also said that Liz had "no scruples at all". The actress has issued her own version saying that she was not a "marriage breaker", that Nayar was convincingly available to her as his marriage was over.

Says Mumbai socialite Queeny Dhody: "Valentina was good for Arun. She is a very sweet person, very warm and friendly." But she may not exhibit these virtues when Nayar fights for divorce in the Italian courts. Since he married her in Italy, he may have to face a justice system that takes "till death do you part" a bit seriously. Worse, he left his wife for Liz Hurley. Right now Valentina is the agonised wife whom her husband for seven good years has left for the kind of woman Christ may have had to save in biblical times from being stoned.

When Valentina came to Mumbai, she stayed at Nayar's Marine Drive home. So she's in no mood for an easy surrender of rights. "She is going to make him pay," a friend feels. It is said that Arun proposed marriage to Hurley though it appears now that he may spend years in Italian courts trying to shed his old wife. Meanwhile, Nayar and Hurley are being spotted in public more often than before. They were found in a restaurant "behaving badly", according to a senior citizen and eyewitness. They have been photographed in a supermarket pushing trolleys, which, according to a British paper, is what all relationships come to eventually. At the market, Hurley bought diapers for her one-year-old son from a previous relationship. Nayar is, of course, "issue-less".

Foppish actor Hugh Grant, who was once caught in a parked car with a prostitute whose meter was running, is an ex-boyfriend of Hurley's. A British paper quoted him as advising her that she should "cool it with Arun" before she gets in "too deep and gets hurt too badly". Grant's analysis: "The guy has caught her on the rebound. He's rich and charming but married, and has a reputation as a ladies' man." It's not clear if Nayar's family approves of this deviation.

Though his German mother is said to be happy Hurley is in her son's life, Nayar's grandmother, who is known to be very close to Valentina, is somewhat angry. Reacting to news of Nayar and Hurley kissing in public, the old woman went so far as to say that girls "from good families" don't do such things. The happiness of family units may be of some importance here for it is being on the right side of generous ancestors that makes Nayar a "millionaire playboy".

In War And Peace, Heal