A Pinch Of Salt 'n Pepper

Three ad spots for UP starring Big B say law and order is fine. People run for cover. 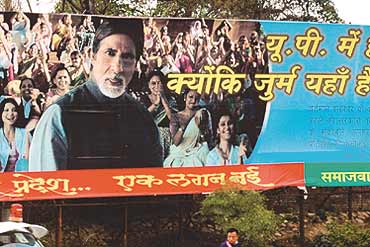 outlookindia.com
-0001-11-30T00:00:00+0553
It's election time in Uttar Pradesh and, for the ruling Samajwadi Party, time to pull out all the stops. And what better weapon to unleash on political rivals (or UP's "enemies") than superstar and son of the soil Amitabh Bachchan? Switch on any news channel now, and you can't miss the refrain for the SP: "Uttar Pradesh mein dum hai, kyonki yahan jurm kam hai (UP is strong because there's less crime here)," says Bachchan in that familiar baritone, waving an impressive-looking file which he says is a Union home ministry report on crime around the country. But he doesn't stop there.

He warns the SP's enemies in a faintly mocking tone: "Yeh aankhon mein dhool na jhonkon (Don't fool the people)" because they have seen the world. He also talks of his deep aversion ("ghrina") for those dependent on UP but who think little of maligning it. And finally, he says that if he were to be reborn, he would want it to be on the banks of the Ganga, in UP again. Those who created the ads have got the message down pat—UP and the SP are synonymous. But it's also a measure of the desperation in SP circles—will the party cease to matter if it loses power in next month's elections?

Glossily produced, the promos are subtle—the SP's cycle symbol appears only in the last frame, and that too in a corner. Of course, Bachchan, the ad's protagonist, doesn't see them as blatant promotion for the SP; in fact he doesn't even see it as a "request to vote for the SP".

The ad spots, running now for close to two months, haven't come in for much serious comment. But TV satires like Double Take and newspaper cartoons have been quick to pounce on it. One cartoon featuring the Bachchan campaign placed a pile of bones—those of the Nithari victims—at the bottom.

Of course, it isn't surprising that the SP mascot was used to counter what will be the top issue this election—the grim law and order situation in the state, notwithstanding statistics in any central report. As senior BJP leader Kalraj Mishra put it, "Law and order will be a key issue in this election. Everyone knows that it's difficult to get even firs lodged at UP's police stations. Jahan FIR hi lodge nahin hote, wahan jurm to kam hi dikhai denge."

The Congress's Jitin Prasada adds, "The SP has picked someone of Mr Bachchan's stature thinking people will believe him. But people in the state are so insecure, this will only result in the actor losing his credibility." Meanwhile, BSP MP Brajesh Pathak is positively vituperative: " Just because Bachchan says so, the crime rate won't come down...if these song and dance experts are going to run our politics, Parliament may as well move to Bollywood."

Bachchan may keep repeating he has nothing to do with politics, but it's a fact that he has chosen to appear on many occasions on the SP platform: on September 25, '06, at Gorakhpur's Deen Dayal Upadhyaya University grounds, he praised UP chief minister Mulayam Singh Yadav, saying only he could eradicate unemployment.

So how does the SP defend the campaign? Amar Singh, SP MP and close friend of both Bachchan and Mulayam, tells Outlook, "Amitabh is not saying there is no crime in UP. But why are people picking on our state only? Look at the Naxal killings in Chhattisgarh, the rape record of Delhi, the skeletons in Congressman Jagmeet Singh Brar's factory in Mukhtsar or the ones found outside the Mission hospital in Ratlam, MP. I'm not justifying Nithari...what happened there was shameful. After Shivpal Yadav (Mulayam's brother and minister) was quoted saying it was a minor incident, the CM himself admitted it was an insensitive thing to say. The National Crime Bureau report, which lists UP as 27th or 28th, has placed Andhra Pradesh—a Congress-ruled state—at the top. So I say let's talk about crime all over the country, whether in Nithari, Mukhtsar or Ratlam. Let's talk about it without political bias."

Then why did the SP pick on law and order when so many other issues could have been used as a campaign plank? "Because it's the only issue our political rivals are harping on," says Amar Singh. He adds, "We've done well on the development front...for the first time, we have a surplus budget, the era of overdrafts is over. If we allow the Opposition to spread this canard that law and order is poor, development will be affected. No one will want to invest in the state."

It's a good defence, but this time people aren't buying it, not even in Bachchan's native Allahabad. Pradeep Singh, who works with an NGO, says, "The young men in the villages I travel in feel it's entirely political. Bachchan is merely an arrow in Mulayam's bow, which he hopes will reach the desired target. People aren't foolish...till the polls were announced it wasn't easy to even move around, the crime rate is so high here."

Rajat Srivastava, who teaches at Allahabad University, is equally scathing: "People here have great regard for Amitabh Bachchan. In the ad, he admits there is crime in UP, whether it is less or more than other states is hardly important, because people here feel its impact. At the university, people say he's in the ad because of personal links with the SP...they have to help each other." A government doctor who knew Bachchan when he was an MP in 1984, has the last word: "This campaign won't work because people are living the reality. Just because people admire him as a star doesn't mean they believe him."