A Pause To Ponder

Vajpayee tells partymen he is 'sad' and cannot work beyond a point. BJP now stares at a post-Atal future. Updates 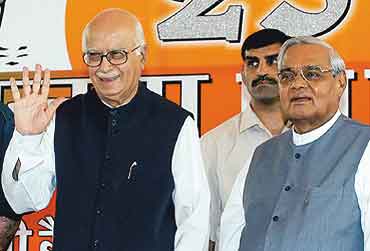 outlookindia.com
-0001-11-30T00:00:00+0553
Atal Behari Vajpayee is that rare politician who can be ambiguous about the simplest of things. "I am sad I cannot work beyond a point. There is a limit to how much I can do (ek seema hai)," he declared at the end of his speech to mark the silver jubilee celebrations of the BJP. Many emotional party workers crammed into Delhi's Ambedkar stadium (named Deendayal Upadhyaya Nagar for the event) saw it as the veteran's farewell address. They concluded that the former prime minister was announcing his retirement from active politics.

But was he? The BJP leadership was clearly unhappy about Vajpayee's remarks and sought to downplay its significance. A party functionary said that Vajpayee is tired and getting on in years and was just expressing a sense of physical exhaustion. Pramod Mahajan told Outlook: "This is not his retirement speech. I don't read it like that. The media is misreading the situation."

Yet there is no denying that Vajpayee, the master of the open-ended statement, had clearly suggested retirement. The big question therefore is what compelled him to make remarks that resulted in what should have been a celebratory function for the BJP ending on a note of panic and confusion. Some partymen believe Vajpayee is feeling somewhat neglected in the new Advani-led dispensation. From being prime minister just a year ago, he is now only produced at ceremonial occasions. The BJP's parliamentary party meetings are also being addressed by Advani. And though Vajpayee remains chairman of the NDA, he no longer plays a pro-active role in the BJP-led alliance.

There is another more sympathetic view that Vajpayee is struggling to break free of a party that refuses to let him go. He still remains the most charismatic and acceptable face of the BJP. Indeed, some party veterans had tears in their eyes when they believed that Vajpayee had finally called it quits. Yet the stark truth is that the ex-PM's health problems continue to mount. His knees have long been a source of trouble and for over a year now, Vajpayee makes all his speeches sitting down. And during the past month the veteran has suffered from an excruciating back pain as well. A close associate says: "He is in so much pain that it is bound to affect his peace of mind." Vajpayee has not been attending Parliament since the budget session began and this was his first public appearance after a long break.

So, whether Vajpayee retired on April 6, 2005, when the BJP celebrated its silver jubilee, or will do so again later, the party clearly has to think of a future without their great helmsman. But this is where the problems begin. It is already clear that L.K. Advani does not have the charisma and remains far too controversial to take the BJP to the heights Vajpayee did. Advani can at best do a holding operation till a younger and more dynamic leader takes charge.

So far, Advani has not been a great success even as a stop-gap president. The man who once evolved all the strategies that put the BJP on the national map today seems sadly bereft of a single bright idea. At meeting after meeting Advani rehashes the same points, covers the same ground. His address at Ambedkar stadium is a case in point. First, he called the BJP "a party of yatras". Then he paid a tribute to Dr Shyama Prasad Mookerjee and Pandit Deendayal Upadhyaya. The cadre were given their due in somewhat flowery language: "It is our grateful task to recognise the services and sacrifices of tens of thousands of our karyakartas who nurtured and protected this tender plant called the BJP." He also resorted to clichés like, "We rose from the ashes like a phoenix".

Every Advani speech progresses slowly—till he builds up to what must have been the most dramatic event in his life. "The Ayodhya movement was the biggest mass movement in India since independence. It was aimed as much at reconstructing a temple at Ram janmabhoomi in Ayodhya as at countering a dangerous campaign to denigrate, distort and erase the basic Hindu identity of India's nationhood in the name of a perverted notion of secularism." Just in case anyone missed the ideological point, it was rammed in further after expending a few hundred more words. "Our inflexible stand on our association with the RSS has given us a distinct ideological identity. We have a very large constituency of like-minded nationalist organisations that support us and work for our success for no reason other than the fact that all of us share the same goal—to make this holy motherland of ours great in every respect."

The clichés and jargon were as can be expected at a gathering of the faithful. But there was a more intriguing point made by Advani when he began to analyse the reasons for "our unexpected setback" in the 2004 Lok Sabha polls. "No single reason was responsible for our electoral setback. However, if I have to mention one of the more important reasons on this occasion, a reason that will remain valid for long years to come, it is this: we must continually nurse our own ideological constituency. During the NDA government's six years in office, we focused so much on issues of development and governance that we somehow forgot to pay proper attention to this core constituency of ours. We ignored our karyakartas. We failed to address their grievances. We did not always respond to their feedback respectfully. This had a definite effect on the outcome of the elections."

Vajpayee's liberal façade had partly been constructed by his reputation for keeping the RSS at an arm's length when he was prime minister. That is why some party insiders believe he might have seen Advani's analysis as a direct criticism of his prime ministership. Yet, what Advani said last week was almost a verbatim lift of what he had said at the last BJP national council held to endorse his appointment as party president. Moreover, soon after the BJP came to power, it was Advani and not Vajpayee who created a furore in the Sangh parivar when he spoke of "de-ideologising governance".

Twenty-five years ago when the BJP was founded, as its first president, Vajpayee had made a long speech that was a mix of anti-Congressism, had shades of Gandhian socialism and tried to appropriate the legacy of Jayaprakash Narayan. It would not be fitting for a man with such an illustrious record to part with an ambiguous remark about retirement preceded by three words that hung in the air without a beginning or an end: "Mein dukhi hoon (I am unhappy)". It is not merely members of the BJP but many Vajpayee admirers across the country who will be hoping that he will retire yet again at a later date.

In Black And White