A Passing Rumour Heard On The Radio?

Brand Akhilesh was second to none—in publicity, that is. Till the results came. 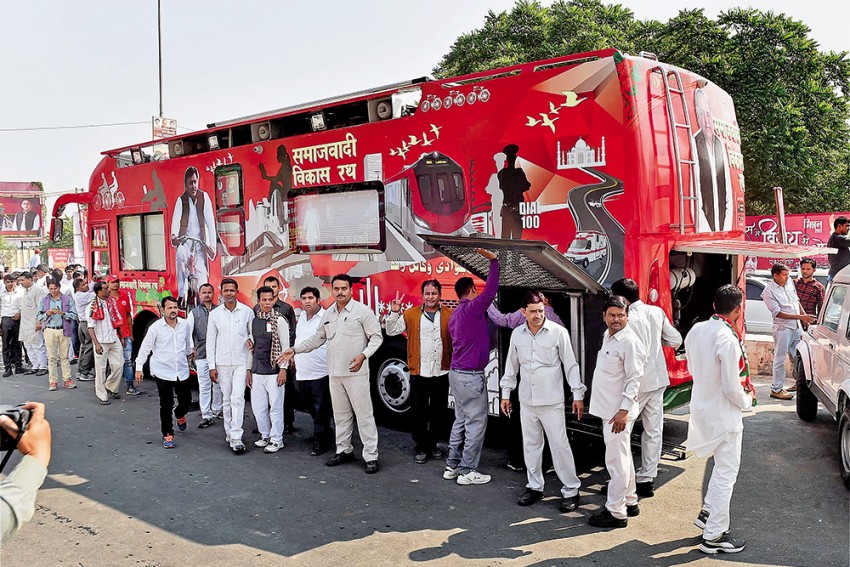 Halt
Akhilesh Yadav’s rath being repaired after a snag during his party’s UP assembly poll yatra in Lucknow
Photograph by PTI
Ushinor Majumdar March 17, 2017 00:00 IST A Passing Rumour Heard On The Radio? 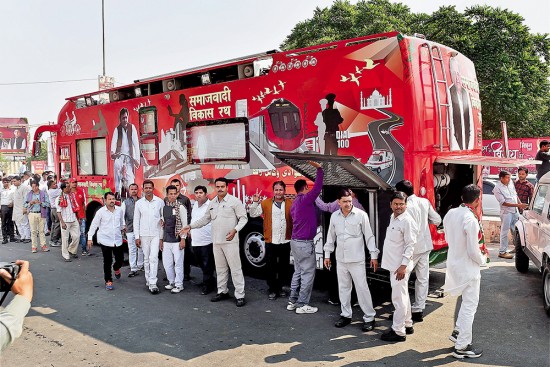 When results were out on the elections to the 17th Uttar Pradesh assembly, the Gomti by Lucknow retained its end-winter calm—in stark contrast was the shock the Samajwadi Party got from the voters of the state. The SP, in a nascent alliance with the Congress, mustered just 54 of the 403 seats, implying that much of the gargantuan poll expenses by outgoing chief minister Akhilesh Yadav had gone down the river.

Five years ago, in the 2012 assembly polls, Akhilesh had won a decisive majority of 224 seats, leading the party’s campa­ign and selling himself as a youth leader. That rosy story hit the Narendra Modi wave two years later; the SP slumped to only five out of UP’s 80 LS seats. Still, he moved into the latest poll with new wind in his sail and a new narrative spun around himself—a bruising battle with the old guard in the SP part of it. With a tie-up with his young peer in the Congress, he deigned to be the main rival to the BJP.

But this narrative was built on the back of a massive ad cam­paign, speculated to have cost hundreds of crores of rup­ees—that too in a political season defined by the alleged use of black money and unbilled favours. The details, to the ext­ent they can be guessed at, are revealing. And they can only be guessed at—for the law stipulates that deta­ils of expe­nditure be furnished with the Election Commission within 90 days of elections, but that seldom happens.

One view is that Akhilesh may well have known he would get only weak electoral dividends, and all the brand-building was meant to position himself for the future.

A bulk of the SP’s poll expenditure went to foot media exp­enses. This includes TV commercials, radio spots, glossy print media spreads, gaudy floats that blared music from alumin­ium cones and hoardings gawking at people across the country’s largest state. Not to mention the latest money- churner: social media. How do they all add up? We don’t know.

There are old figures available. The SP’s audit statements for 2013-14 and ’14-15 declared an income (fees, subscriptions, contrib­utions) of Rs 159 crore and Rs 181 crore respectively. The exp­enses shown for the respe­ctive years were around Rs 22 crore and Rs 76 crore. Exp­erts naturally don’t subscribe to declared figures. “Poli­tical parties use proxy organisations to print adverts,” says Alok Rai, who teaches marketing and brand management at the BHU. “Parties hire agencies for which they have a very high budget.” For instance, the Congress in 2014 hired Japanese ad-PR company Dentsu, Rai notes, for Rs 500 crore to fetch the party’s leader Rahul Gandhi an image makeover. For the parliamentary polls that time, the Grand Old Party disclosed Rs 563 crore as its total election expenses. As per the poll body’s data, the SP declared an expenditure of Rs 64 crore for the 2014 LS elections. Compare this with that of the BJP’s Rs 700 crore—even that, many allege was a deflated figure. Going by the pattern, how much would the SP have actually expended in 2014 and 2017? Unanswered phone calls to Akhilesh and his associates leave it a mystery.

A pollster who predicted a 250-plus seat win for the BJP in UP this time says all media houses must have earned a huge revenue from that state from 2011 till now. “There were three major elections: the 2012 and ’17 state assembly elections and the 2014 Lok Sabha elections,” he notes. 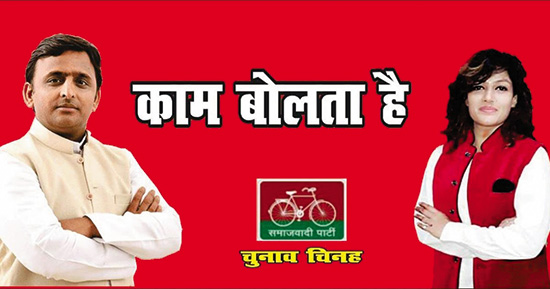 Those observing UP from inside say all the contesting parties spend a lot. Initially, the SP campaigned in association with a Delhi-based image consultant. The effect was visible on the social media pages of the Yadav clan. Then, after the split in the SP earlier this year, Akhilesh and his rebel team moved on (taking the SP’s bicycle symbol with them), while party founder Mulayam Singh and his brother Shiv­pal Yadav remained with this image manager. That is when people started to notice a huge surge of publicity for Akhil­esh in the English media—leading to rumours about ‘paid news’.

Media analyst Sevanti Ninan, editor of The Hoot, says UP 2017 was not just a state election, but was tantamount to a referendum on demonetisation and the popula­rity of the PM. “There was interest in whether the BJP would rep­eat its 2014 Lok Sabha performance in UP. Elections are a huge viewership-getter and advertising draw—no media outlet will miss the chance to get viewers and readers,” she says. “Therefore, there has been a lot of legitimate interest in covering these polls.” So, if Rahul won’t talk, it makes sense to go for the more  accessible Akhilesh and put a face with the news reports. That still doesn’t cover the speculation about paid news. As for the social media campaign, the SP built it from scratch, strategised by a 100-strong team led by Steve Jarding, a Harvard professor who had helped with Hillary Clinton’s presidential campaign in the US last year.

The BJP has a huge social media cadre. On any issue, it is a matter of simply activating it and then watching the carpet-bombing that follows. “The content generation and cur­ation required in this is enormous,” says a Luck­now-based journalist. “The SP managed to get close to the BJP on social media sites, the latter won hands down on Whats­App. Text or video, the BJP was way ahead in pushing its message.” The same goes with radio spots, he adds. Each FM channel can cover up to 7-8 Vidhan Sabha seats. “The BJP had stressed on radio from early, and did well on FM. They began on a high number and re-invested later on,” he says. “The release orders for radio ads were issued at the right time and held in a close circle to insulate it from leakages.”

As CM, Akhilesh used radio to communicate the development activities of his government. Bureaucrat Navneet Sehgal was a key figure here—Akhilesh coopted Sehgal, considered a powerful officer during Mayawati’s last tenure, and turned it around with the radio playing a big role.  Listeners in Delhi heard the popular Neelesh Misra promoting UP’s schemes through his talk-show. Outlook spoke to Misra, but he claims to not see much of a story in media expenses during elections. The successful strategy promp­ted the CM to draw Sehgal closer to his government’s image management.

The SP-Congress alliance also ran advertisement campa­igns through strategist Prashant Kishor’s team. But Kishor could not replicate his success in the 2014 BJP campaign or the 2015 JD(U) campaign in Bihar, reportedly hurdled by the Congress’ inner bickering.

So, why the huge spend? 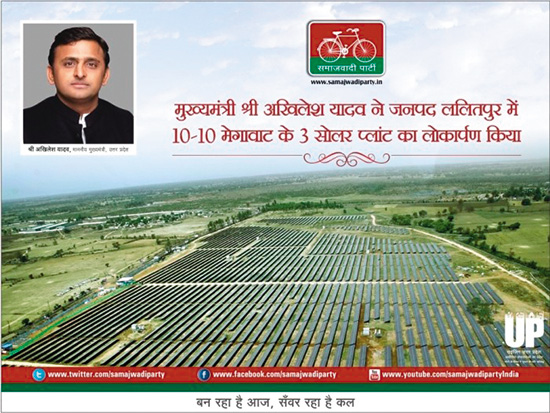 “A CM has different government agencies at his disposal, and would perhaps be aware that he’d only get 50 seats,” says Prof Rai. “Akhilesh’s father handed him the government, he got the party and symbol through a coup and now he has to drum up support for himself. Through the entire media exe­rcise, Akhilesh was positioning himself as a future leader for a larger role or a space in future elections in the state.”

The very nature of electoral politics has changed since the advent of cult politics that requires the creation of individual brands over the corporate (party) brands, adds Rai. “Individual brands require communication of a certain set of attributes and this new demand has made electoral politics a very expensive affair,” he explains. “When you spend on brand communication, the customer develops many expectations and when these are not met, there is brand dissonance. That is what Arvind Kejriwal has been doing in Delhi where his AAP created a brand based on anti-corruption promises through a social organisation. The side effects will be very heavy, as seen by his result in Punjab.”

On the internet, 43-year-old Akhilesh’s face popped up in well-­designed ads that had a hyperlink to the party’s manifesto. The caption read: Kaam Bolta hai, indicating the CM’s achievements from 2012-17. But, there is a jingle that goes on to say Kaam bolta hai, anjaam bolta hai. That is, work speaks for itself; so do the results.