The Republican 'victory' in the senate has justified Bush and rendered the anti-war protest irrelevant in one stroke. 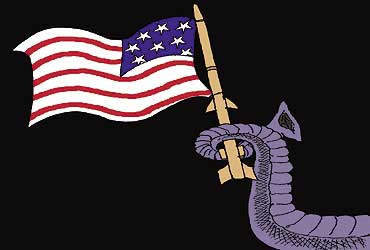 outlookindia.com
-0001-11-30T00:00:00+0553
The Republican Party's stunning success in wresting control of the US Senate from the Democrats by increasing its seats in a non-presidential election year—one of the very few times this has happened in American history—provides stunning proof that paranoia and jingoism can be converted into votes in a democratic system. How else does one explain this powerful pro-incumbent swing at a time of deepening recession, a 30 per cent rise in the number of unemployed and a 40 per cent fall in the value of most people's retirement funds because of a huge deflation of prices in the share market?

The short answer, of course, is that it's the fault of those Islamic terrorists. Had 9/11 not happened, the recession would have been over already and the share market would have stabilised at a much higher level. That, at least, is the message the Bush administration has beamed incessantly to the American people. The US is at war. The attack is not on American territory but the US's economic security and way of life. The Bush administration is fighting a determined battle and has scored notable successes and intends to score many more. Eventually, 'terror' shall be vanquished. The US has destroyed the Taliban regime in Afghanistan, it's rounding up the remnants of Al Qaeda in a dozen countries and to make sure that Saddam Hussein doesn't pass on weapons of mass destruction to these Islamist terrorists, it's shortly going to wage war on Iraq.

The stunning Republican 'victory' has vindicated his policies and at one stroke rendered irrelevant the gathering anti-war protest in the US. The consequences for the world could be devastating. To begin with, it has all but sealed Iraq's fate. Armed with this endorsement, the Bush administration is virtually certain to ignore any hurdle the UN Security Council may put up, and declare war unilaterally on that unfortunate country. Indeed, it may not be a coincidence that the US defence department has furnished details of the way it intends to use unmanned Predator aircraft to The New York Times. The aptly named Predators can loiter over Iraqi targets for as long as 24 hours while an operator hundreds of kilometres away fires its missiles at anything that moves on the ground. The purpose of this leak, obviously, is to counter the growing anti-war sentiment in the US by reassuring Americans that it will be American machines and not American men that will be doing most of the killing. For good measure, the leak also suggests that these machines have the capacity to minimise Iraqi civilian casualties as well.

But is attacking Iraq the best use President George W. Bush can make of the endorsement he has received? A moment's rational thought would show that in the long run it will do more harm than good. To begin with, only the very naive will believe that aircraft like the Predator can kill Hussein from a safe distance. Should he decide to hole up in the heart of Baghdad as he is almost certain to do, getting to him will require street fighting, which will mean razing to the ground entire blocks of the city, killing most of those who are within them. This will lead to tens of thousands of Iraqi casualties and quite a few American ones. The comparison the world will make will be between the American sack of Baghdad and the German destruction of the Warsaw ghetto in 1944. What that will do to the US's moral leadership of the world—something that no hegemonic power can do without—is best left to the imagination.

The second consequence will be an explosion of anger in the Muslim world. This will make it extremely difficult for the US to retain the cooperation of the governments of Islamic countries or those with large Muslim populations. The US has already had a foretaste of this in Pakistan where the rise of the Majlis Muttahida-e-Amal to second position in the national assembly can be traced directly to anger against the US for the attack on Afghanistan.And that is even before it has attacked Iraq.

The third consequence could be an enhanced recruitment of highly educated, technologically savvy young Muslims all over the world into the various affiliates of Al Qaeda and the formation of new terrorist organisations.

The fourth could be the one the US fears most—it could bring about a migration of Iraqi scientific talent to the ranks of the terrorist organisations. It is true that years of diligent search by the cia has failed to uncover any links between the Iraqi state and Al Qaeda. But that does not guarantee that Iraqi individuals will not shift loyalties at some time in the future.

The fifth and in some ways worst would be the rise of a new McCarthyism in the US. The draconian restrictions of civil liberties, targeting of selected minority groups, which were enacted by the Bush administration in the aftermath of 9/11 began the movement in this direction. The voting in the Senate elections suggests that the trend has strengthened. Anger in the Muslim world following an attack on Iraq, criticism from European and other allies and a greater sense of isolation could easily fuel this trend and make the US unrecognisable to those who have known it over the past several decades. That would be an indescribable tragedy. For the US is where the politically oppressed have headed for the past 300 years in search of freedom.

One can sympathise with the American dilemma. It is facing a constant threat from an unseen enemy that has no fixed territorial or political base. Since all of America's weapons have been developed to hit states and territories, it finds itself virtually powerless to avert the threat by conventional means within the ambit of existing international law. It is, therefore, desperately looking for ways in which to adapt weapons and strategies to meet the new threat. It will do well, however, to make sure that in its desperate hurry to find an answer it does not do itself more harm than good.