A Nation Within 4 Temples

The millennia-old idea of Bharat has been gripped in confusion since Indian independence. Now is as good a time as any to clear the haze. 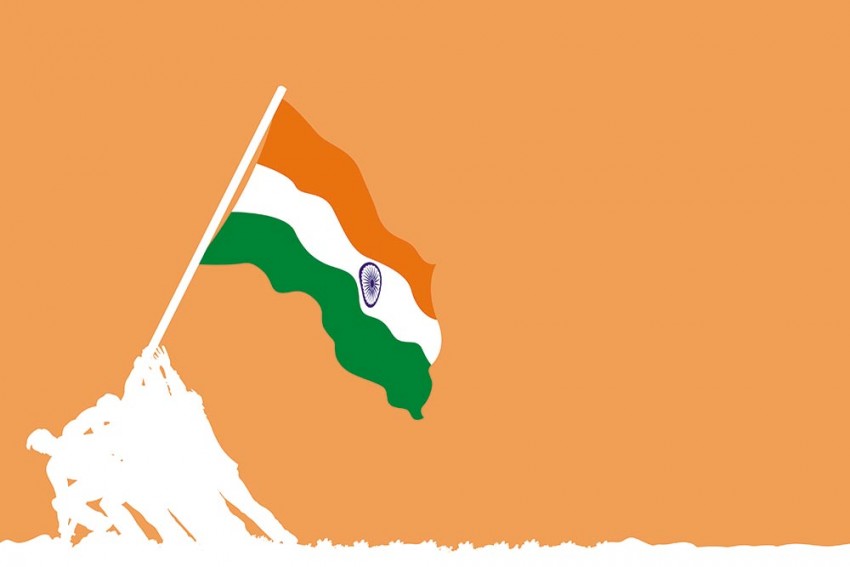 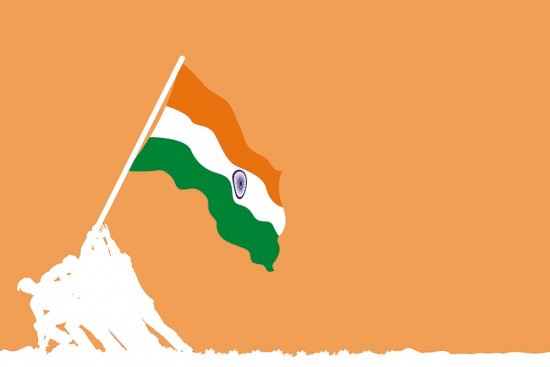 Patriotism, nationalism, nation and country are not ind­ependent concepts. They are so inter-related that none of them can be comprehended in isolation. Patriotism is not just love for a piece of geography. It is devotion to the idea of one’s nation—in which a territory, people and their history, culture and ancestry converge. A nation needs territory, but it is not equal to just territory. Also, not all nations’ nationalism is alike. An organically evolved nation is the collective consciousness of a people with shared history and values. Here are two contrasting examples of nationalism for a closer inquiry— the US and Israel.

Jewish Israel Vs Melting Pot US

Mahatma Gandhi drew on the idea of Bharatvarsha as India’s spiritual nationalism.

The US prides itself as a ‘melting pot’—or a ‘plate of salads’—nation of immigrants long populating its geography, even though Samuel Huntington described it as a White Anglo-Saxon Protestant (WASP) nation. The US is less an org­anically, more a mechanically evolved nation. Organically evolved nations are different. Their national consciousness can exist without even a territory! It did in the case of the Jewish nation, which existed in the consciousness of the Jews for two millennia without a territory. The Jewish people were strewn around 100 nations in the world, including India, for two thousand years. It was in 1947 that the Jewish people got a piece of ‘their’ territory back—present-day Israel. Their consciousness as nation got them their land. National consciousness can regain lost territory, but mere territory cannot regain lost national consciousness. The idea of the Jewish nation is the very contrast of the idea of US as a nation. Jewish nationalism is actually a racial concept. Yet, the world recognised it. A territory with a mere collection of people is no nation just because it is ruled by a State; for example, former USSR, Yugoslavia and the likes. Love of territory, sans the idea of nation, is not patriotism. Nor is it nationalism. Territorial nationalism or territorial patriotism equals just a landlord’s love of his land. Patriotism is love of one’s nation and the land of its ancestors. Now let’s look at how our great ancestors and leaders captured the idea of Indian nationalism. A ­depiction of the American war of ­independence; Moses separates the Red Sea (right)

Gandhi and Aurobindo on ­Indian nationalism

The Indian nation existed from times immemorial. The Vedas speak of a ‘rashtra’. In the Vishnu Purana, Vayu Purana, Linga Purana, Brahmanda Purana, Agni Purana, Skanda Pur­ana, and Markandeya Purana, the larger India was known, millennia before, as Bharatvarsha, its people as Bharatiyas, its ruler as Chakravartin. The ­Puranas emphasised spiritualism as the soul of Bharatvarsha. In Hind Swaraj, Mah­atma Gandhi’s fundamental text, he drew on the ancient idea of Bharatvarsha as India’s spiritual nationalism. Gandhi said that our ancestors who established Setubandha (Rameshwar) in the South, Jagannath in the East and Haridwar in the North as places of pilgrimage were no fools. He asserts that the ancestors knew that worship of God could have been performed just as well at home and yet they argued that it must be (as) one nation, and est­ablished holy places in various parts of India, thus firing the people with an idea of nationality in a manner unknown in other parts of the world. Even the advent of Muslims, Gandhi said, would not make any difference as they ought to be assimilated into the mainstream nation. Maharishi Aurobindo was of the view that Indian Nationalism is Hindu nat­ionalism which is no “creed, religion, faith” and said that the Hindu nation was born with Sanatan Dharma that is nationalism. Emphatic indeed, were both Gandhi and Aurobindo.

Swami Vivekananda’s nationalist ­exhortations are said to have triggered the freedom movement. The British police repeatedly found his literature in the hands of freedom fighters and even mulled action against the Ramakrishna Math. The tallest of leaders attributed the freedom movement to him. Mahatma Gandhi said, “Reading Viveka­nanda has made me love the country a ‘hundred fold’. Subhash Chandra Bose described him as “the spiritual father of the modern nationalist movement”. C. Rajagopalachari wrote, but for him “we would have lost our religion, not have gained our freedom; we owe everything to him.” Rabindranath Tagore also told fellow Indians, “if you want to know India, study Vivekananda”. For Jawaharlal Nehru, secular India’s icon, Vivekananda “was one of the great founders of the national movement, who inspired the freedom fighters”. Even Aurobindo and Subramanya Bharati were inspired by Vivekananda. What did Vivekananda have to say about the Indian nation and nationalism? “A nation in India,” he declared, “must be a union of those whose hearts beat to the same spiritual tune”. Comparing the three living nations of his times—English, French and Hindu—he said, ‘the Hindu nation is still living’ because of its religion. He termed religious conversions as perversions. Vivekananda went the farthest to ­defend the Hindu ­character of India. Finally in the year 1995, the Supreme Court of India itself confirmed the core Hindu cultural character of India. Referring to the concepts ‘Hindutva’ and ‘Hinduism’, the Supreme Court ruled, “No meaning in the abstract can confine it to the narrow limits of rel­igion alone, excluding the content of Indian culture and heritage. The term `Hindutva’ is related more to the way of life of the people in the sub-continent.” The Court also recalled its previous judgement in the Ayodhya case, where Justice Barucha speaking for himself and Justice Ahmadi, said, “Hinduism is a tolerant faith. It is that tolerance that has enabled Islam, Christianity, Zoroastrianism, Judaism, Buddhism, Jainism and Sikhism to find shelter and support upon this land”. In saying so, he almost equated Hinduism to secularism. As late as in 2017, the Court refused to review its 1995 judgement on the Hindu cultural character of India.

Vivekananda, Gandhi, Aurobindo and the Supreme Court independently converge on Hindu culture and way of life manifesting on Indian nationalism. But the post-Independence secular discourse is devoid of the true sense of India. It has so distorted the idea of the Indian nation that whatever inspired the freedom movement—whether it be Vande Mataram, composed by Bankim Chandra, or the ideal of Rama Rajya revered by Mahatma Gandhi or the concept Hindu nationalism expounded by Swami Vivekananda and Maharishi Aurobindo—is regarded in the contemporary discourse as communal and even anti-secular. This is what has created confusion in India about what is nationalism and patriotism. Unless the secular discourse discards the distortion and falls in line with the views of the great men who shaped India and the Supreme Court, the confusion is bound to continue. 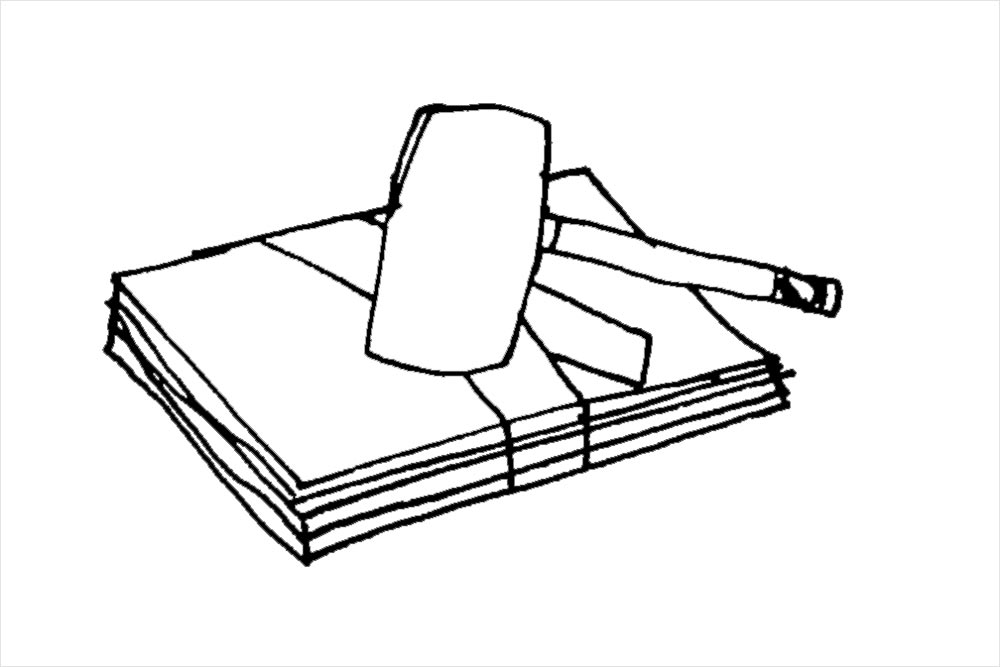 The Supreme Court’s verdict ­clarifying the concepts of Hinduism and Hindutva was delivered in context of the ‘Ramesh Yeshwant Prabhoo versus Prabhakar K. Kunte’ case where the charge on Prabhoo was of using the terms ‘Hinduism’ and ‘Hindutva’ for an incendiary ­effect on people while canvassing for electi­ons. The Bombay High Court ruled against Prabhoo, and the SC upheld the decision, but went on to assign meaning to the terms ­‘Hindutva’ and ‘Hinduism.

S. Gurumurthy The author is the editor of Thuglak, professor of legal anthropology and a political commentator.