A Nation On The Unmake 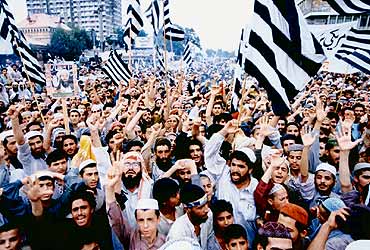 Lest this seem like familiar Indian propaganda, it is a picture that emerges from the books under review, written by individuals long familiar with Pakistan and broadly sympathetic to it, though with eyes wide open. Both are journalists who have gone uncommonly deep into their subject. In sometimes overlapping accounts, each has much to say and together they provide an arresting account of today's Pakistan.

Jones sets out to write a history, and his is a more structured effort. He looks at the sense of insecurity vis-a-vis India that affected Pakistan from the start and that leads to a constant quest for offsetting friendships. Hence its tangled tie with America. Also afflicting it from the start are the problems of governance that have repeatedly led to army intervention. Jones takes a cool look at the army, politically dominant but always unsuccessful in war, its generals unable to think through the consequences of the actions they initiate. Kargil is a case in point, where the tactics were smart but hopelessly inadequate, decision-making meant there was no exit plan from the inevitable trouble to follow. Unanswered questions like the role of Islam and Kashmir remain salient, the regions pull apart, the nation's structure is brittle. Democracy has been undermined by the agencies that should have held it together: civil service, judiciary, politicians, army, intelligence. The army rank-and-file is becoming radicalised. It is a sombre picture.