In a terror side-story, a sadhvi and ex-servicemen are suspects 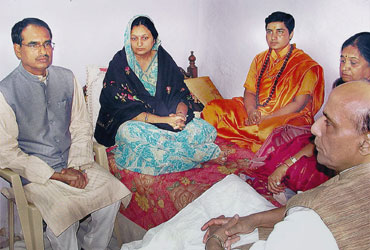 Hindu bombs to counter Islamic terrorism? The idea did apparently hold some appeal for a group of young activists led by Sadhvi Pragya Singh Thakur. She and her associates are now in the custody of Maharashtra's anti-terrorism squad (ATS) for allegedly planting an RDX-laden bomb on a motorcycle parked outside the sealed SIMI office in Malegaon, northern Maharashtra, on September 29. The blast, a day before Id, killed six people and injured 90.

A month on, the investigations are heading in a direction hitherto untaken. They point to those with associations, past or present, with the Sangh parivar, and of those with links to the Indian army. Last week, the ATS wrote to the Union defence ministry for permission to interrogate a lieutenant colonel of the Army Education Corps (AEC), who it says has links in the buzzing Hindu hardline circuits of Madhya Pradesh. Permission has since been granted. On a tipoff, a 15-member ATS team had left for Indore within days of the Malegaon blast; it had questioned as many as 60 people before zeroing in on seven, five of whom were brought to Nashik-Malegaon for investigation. Sadhvi Pragya Singh Thakur being brought to court in Nashik

What led to the entire network was the original piece of evidence: after forensic analysis, the mobike to which the bomb was strapped was traced to Pragya Thakur, 38. Originally from Bhind in Madhya Pradesh and settled in Surat, Pragya is a former leader of the Akhil Bharatiya Vidyarthi Parishad (ABVP), the BJP's student wing. She is also a member of the Durga Vahini, the VHP women's wing, and is known for her fiery speeches. The ABVP has denied any active association with her, though the ATS has confirmed that she was even a member of its national executive council in the late '90s. In 2002, Pragya formed the Jai Vande Mataram Jan Kalyan Samiti and later the Rashtriya Jagaran Manch in Indore, which, ATS officials say, was under the scanner too. The sadhvi has been remanded in police custody by a Nashik court till November 3.

The ATS alleges it was she who was operating the network. Her two associates, Shyamlal Sahu and Shivnarayan Singh, were arrested with her. Another associate, Sameer Kulkarni, was taken into custody a few days later. Sahu, 42, who allegedly planted the bomb near the sealed office of the banned SIMI in Malegaon, is a real-estate broker, mobile shop owner and BJP member. Sahu's saffron connection was vouched for by Kailash Vijayvargiya, a Madhya Pradesh minister, who said he "knew him personally". Singh, 36, is an electrician and insurance agent, though the ATS claims he is "a mechanical-electronics expert" who assembled the bomb timer. Kulkarni, 32, is also a former ABVP member who moved from Maharashtra to Bhopal a few years ago and worked in a printing press. All of them have been charged for murder, attempt to murder and unlawful assembly under various sections of the IPC, besides sections of the Explosives Act and the Unlawful Activities Prevention Act.

Sources in the ATS say that their suspicion of serving and/or retired armymen aiding the "Hindu bomb" operation proved correct when the trail led to Maj Ramesh Upadhyay (retd) and a retired jawan. "The procurement and use of RDX is not easy for a layman. It can be procured only from terror groups across the borders or from army ammunition depots. Our scanner was on a few armymen we suspected of helping Pragya's group procure the explosive and teach them its use," says an ATS official. Upadhyay, 64, had worked in military intelligence and had settled in a rented flat in Pune's Akurdi area, from where he was picked up. He had also led the ex-servicemen's wing of the Mumbai BJP for a while. He is alleged to have trained Pragya and her associates. The site of the Malegaon blast of September 29, 2008, in which six persons were killed

The serving lieutenant colonel is likely to be interrogated soon. The ATS's task will be to connect the dots between serving officers, retired officers and figures like the young sadhvi, and how the links evolved vis-a-vis the procurement of RDX and training in its use. "We are still investigating certain links," says ATS chief Hemant Karkare. Proving the RDX link to an army depot is easier said than done: it involves RDX profiling of blast and depot samples and matching them; it is not clear if the ATS had recovered and profiled the blast sample.

The ATS also claimed to have arrested two men from Modasa town, in Gujarat's Sabarkantha district, where a similar bomb went off on the same day as in Malegaon. Though identified as "middle-aged Hindu men", their associations, if any, to radical organisations or right-wing parties have not been immediately established. Following the Malegaon and Modasa trail, the Uttar Pradesh police have sought inputs from the ATS to probe the August 24 blast in Kanpur, where two men, Rajiv Sharma and Bhupendra Singh, reportedly Bajrang Dal members, were killed while assembling a bomb. They are believed to have called two Mumbai mobile numbers frequently that month.

In Malegaon now, there is a clamour for reinvestigating the September 2006 cycle blasts outside a mosque that killed 30 people on Shab-e-Barat night. The investigation had reached a dead-end then. For the ATS, the breakthrough in the September 29 blast could not have come at a more appropriate time.

Even as the term 'Hindu terrorists' gained ground a day after Pragya was arrested, the BJP objected to its use. Party leader Yashwant Sinha told the media: "Some sections are trying to malign the majority community. The BJP objects to the term 'Hindu terrorists', which is wrong—investigations should happen but the whole majority community is being assailed." Coming from a party that has incessantly referred to terror acts in the country as the handiwork of Islamic terrorists, it was nothing short of doublespeak. The BJP's discomfiture was, of course, a source of satisfaction for the Congress. AICC general secretary and former Madhya Pradesh chief minister Digvijay Singh called Indore the epicentre of Hindu terror organisations and demanded that the BJP come clean on its links with other organisations of the Sangh parivar before targeting others. The political game has just begun.