Books That Created A Buzz This Year 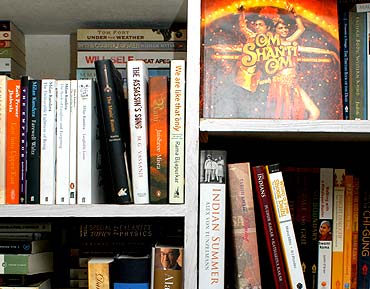 As farmers say about mango harvests, "A good year will always be followed by a bad year." It was the worst of years, with no books by Booker prizewinners or other litstars; a literary year stripped, incredibly, of all buzz. But it left the field wide open for some unexpected winners to rise to the top, including history books, books by and about filmstars, a music memoir, and a book on Gandhiji.

India After Gandhi: The History of the World’s Largest Democracy by Ramachandra Guha (Picador)

In this doorstopper of a book, Ramachandra Guha has done the near-impossible: written an impeccably researched book of contemporary history that is as gripping as any novel, and with as many colourful characters. Former academician Guha, author of books on cricket, environmentalism, Himalayan peasants and a bestselling biography of anthropologist Verrier Ellwin, has proved that scholarship and readability aren’t mutually exclusive, raising the bar for other historians.

When A Tree Shook Delhi: The 1984 Carnage and its Aftermath by Manoj Mitta and H.S. Phoolka (Roli)

This is the first serious expose of the anti-Sikh riots 23 years ago, recounting the chilling horrors of the carnage plotted by the state and how the judicial process was subverted to protect the guilty. An authentic and invaluable record, this is, as sociologist Ashis Nandy describes it, "a handy guide on how to organise a communal riot and then escape the consequences."

Mohandas: A True Story of a Man, His People and an Empire by Rajmohan Gandhi (Viking/Penguin)

Thanks to the nation’s new love affair with Bapu—and candid details of his relationships with women, including the beautiful Sarala Devi Chaudhurani—Rajmohan Gandhi’s 745-page tome on his grandfather hit the bestseller jackpot. It sold 12,000 copies in hardback alone, to the astonishment of even his publishers. Astonishing, because this is a meticulously researched biography on a subject on which hundreds of books appear every year. What marks this quiet bestseller out from the rest of Gandhi books, both scholarly and popular, is its searching honesty, its dignified distance and its readability.

Romancing With Life: An Autobiography by Dev Anand (Viking/Penguin)

This kiss-and-tell memoir of Bollywood’s serial lady-killer set the cash tills ringing, despite the quaint she-held-her-lips-up-for-a-kiss prose. But neither the relentless—and breathless—bedroom romps nor the tittle-tattle about the fraternity disguises Dev Anand’s real and only passion: himself.

Our insatiable appetite for filmi tittle-tattle is whetted in this earnest biography of Bollywood’s nicest couple, including Nargis’s chequered past and lineage. But Kish-war’s approach to her subject is like the filmi version of the kiss: all coy suggestion and no substance. Was Nehru more than the rakhi brother that Nargis’s mother, Jaddanbhai, claimed he was? Read between the lines and draw your own conclusions.

In an age when literary novels in India are growing obscenely bloated, this book’s most heartening quality is its brevity: only 184 pages long, and not a line of unneccessary description. That must certainly be one reason why it became a runaway hit, despite its many literary conceits, including telling the story, Ancient Mariner style, in dramatic monologue and that curse of any good novel—an open-ended conclusion. A deft tale about a Princeton graduate who undergoes a drastic—and a little unc-onvincing—transformation, post-9/11.

This unusual first book by young Princeton graduate and journalist, Namita Devidayal, part coming-of-age memoir, part introduction to Hindustani music and its singers, part cultural history, wholly enthralled readers. Books on Hindustani music and singers usually sink without a trace, but this gossippy, delightfully readable peek into a fading heritage, seen through the eyes of a 10-year-old schoolgirl dragged off by her parent to Mumbai’s seamy side to learn music from the last heiress of the Jaipur gharana, is a book that will stay.

Men in White: A Book of Cricket by Mukul Kesavan (Penguin/Viking)

In a year when it was raining books on cricket, this book was that rare thing: it’s not only for those who enjoy the game but for anyone who enjoys good reading. Novelist Mukul Kesavan’s take on his favourite sport is racy, delightfully bilious and sparkles with one-liners. Instead of cramming it with jargon on runs and technique, Kesavan focuses on what he’s best at: presenting cricket through the eyes of a historian and the temperament of a novelist. With this book, Kesavan has breathed life back into that endangered genre: personalised essays.