Legally, Modi has no choice but to act on the NHRC report 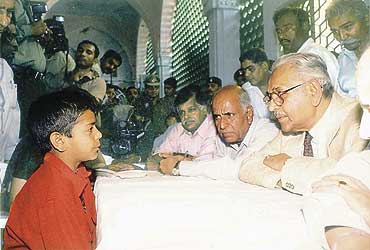 outlookindia.com
-0001-11-30T00:00:00+0553
The verdict is near-unanimous. The preliminary report of the National Human Rights Commission (NHRC)—detailing the breakdown in law and order and communal violence which engulfed Gujarat—is much more than a damning indictment of the state government. It is essentially a motion of no-confidence against chief minister Narendra Modi. And the Gujarat government legally has little choice but to act on its recommendations.

Chief among the 18 salient proposals of the NHRC are:

Outlook spoke to a cross-section of legal luminaries including former chief justices and senior lawyers on the implications of the NHRC’s report and what now requires to be done. Notes former Bombay High Court judge Hosbet Suresh: "I think the NHRC has acted firmly and has looked into the situation properly. I think it is really time for the government of Gujarat to step down on moral grounds. Even now, as we speak, Gujarat is burning. I think it is a violation of human rights amounting to genocide."

Anger is building up in legal circles over Modi’s insensitive handling of the situation and his failure to check the violence. Says senior Mumbai-based advocate Iqbal Chagla: "If Justice Verma’s report means an indictment of the Gujarat government and in turn, implies a dismissal of Modi, then he must quit."

Given the muted reaction of the Modi government to the NHRC findings, many fear the state government may ignore the report altogether. But should it do so, the commission could move the Supreme Court under Section 12(G) of the Protection of Human Rights Act (PHRA), seeking intervention and adherence to its order.

Says former SC chief justice and NHRC ex-chairman Ranganath Mishra: "The commission does not authorise others but power is conferred on the body in its mandate. Under Section 18(5) of the PHRA, the institution or government, as the case may be, is obliged to submit an action-taken report on the commission’s recommendations." Failure could lead to the NHRC moving the apex court. Former additional solicitor-general C.S. Vaidyanathan concurs: "The moral pressure is on the state government to show compliance." Nitya Ramakrishnan, a lawyer who has dealt with many human rights cases, reinforces this. "The Gujarat government has to act."

Set up in October 1993, the NHRC has passed several significant orders on custodial deaths, women’s and children’s rights, police encounter deaths and measures to improve police-public relations. All its orders have till date been acted upon. In fact, during his tenure, Mishra says he had no difficulty in getting NHRC orders translated into action. "I recall on three occasions the commission sought directions from the apex court, the Madras and MP high courts and our recommendations were implemented." In fact, NHRC also intervened successfully in the 1993 Bijbehara firing incident in Kashmir and made the army pay compensation to the families of civilians killed during firing on a demonstration.

That Justice Verma had to make a strong case for handing over investigation into five major incidents, including the Godhra train attack, to the CBI endorses the widely-shared belief among many that the investigations by the state police are biased. Says eminent lawyer Ashok Desai: "The NHRC has rendered a great service both by the speed and content of its report. It has clearly exposed the working of the government in the state. Communal violence is not new but what is ominous is that the spiral of violence was very well organised. I think the CM’s resignation is a political matter but one thing is clear: the government must take the NHRC report seriously."

Former chief justice of India M.N. Venkatachalliah has not gone through the commission’s order but says: "The NHRC is a watchdog institution with its own reporting obligations. The polity has to be evolved to respect the culture of human rights which is extremely important in a democracy like India."

Others in the legal community feel the NHRC report has pinpointed serious lapses in almost every area of administration and law enforcement. Says constitutional lawyer A.G. Noorani: "This is an organised pogrom. The prime minister, most of all, should be firm on the issue and ensure the report is followed in letter and spirit."

Yet, despite the public outcry, Modi has chosen to keep his own counsel. He may put in place some temporary measures to deflect attention but that may not satisfy the NHRC.