A Mint's Adventures Up North

This one may feel too good to be eternally true. Is the rupee's ascent only a handy cue card for a gullible electorate? 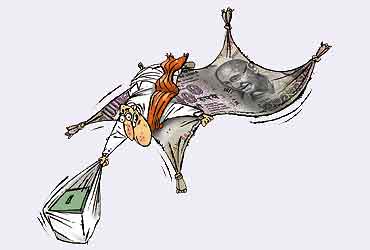 Hukum Singh's enthusiasm is shared by the BJP too. Senior party leaders are talking excitedly—and somewhat stupidly—about how we may even see a rate of Rs 17 to a dollar. The truth is, in an election year for the ruling coalition an upward movement of the Indian blueback is only more campaign ammunition. Economic experts agree it's become a political necessity to let the currency float northwards. At least until the elections are over. Fortunately, immediate economic concerns seem to support the case for the rising rupee, which went up by over 4 per cent in the month of March.

A strong rupee bolsters the BJP argument that India is emerging as an economic superpower. This week, at a rally in Lucknow, Prime Minister A.B. Vajpayee spoke about how the Indian economy has reached a stage where it's witnessing double-digit growth. A few weeks ago, home minister L.K. Advani quoted Goldman Sachs' BRIC report which forecast that Brazil, Russia, India and China will be the four largest economies on the planet by 2050. And last week, he talked about a London School of Business study which concluded that India created an amazing 17 million jobs in 2003!