India's quiet, brutal wars are lost in the din of Kashmir and Hindutva 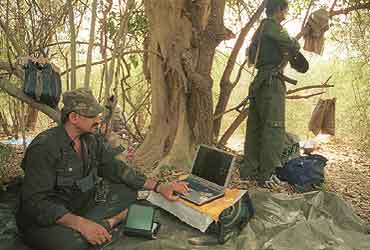 Every now and then, India gets a wake-up call. A reminder that long-drawn battles are still being waged in remote corners of the country, away from the glare of media publicity. In the Northeast, these forgotten wars are being fought for independence from the Indian Union. In Tamil Nadu, Veerappan & Co play hide and seek with the law in the forests. In large swathes of the Indian state, extending from Bihar, covering tracts in Orissa, Jharkhand, West Bengal, Chhattisgarh, Maharashtra and Andhra Pradesh, Naxalite outfits remain deeply entrenched in the countryside, still waging their struggle against 'class enemies'.

Last fortnight, the People's War (PW) returned with a high-profile strike on Chandrababu Naidu, an assassination attempt the Andhra chief minister miraculously survived. But 10,000 people have died in the state since the group's active phase in the '80s and hundreds of thousands have been killed elsewhere. The costs of these wars to the Indian State remain too large to compute.

These protracted struggles point to the many failures of the Indian State. Both in the Northeast and in states where the far Left has struck roots, exploitation and a sense of alienation are acute. In parts of Andhra and Bihar, terrible deprivation and an old history of Left activism make it a natural playground for the comrades. Says revolutionary balladeer Gadar, "As long as there is hunger in the belly, the fire will continue to burn." Adds human rights activist Gautam Navlakha: "The root cause is India's failure to bring any real transformation in the countryside." Sumanta Banerjee, author of India's Simmering Revolution, too points out that it is in some of the most backward parts of India that the Naxals have a grip on the rural poor. "This is because of the failure of the state to tackle the socio-economic origins of their poverty. I believe the biggest achievement of these groups has been to keep issues like land redistribution on the agenda."

Tragically, the last decade has seen public focus shift from the bread-and-butter issues of poverty and exploitation to battles over religion and caste. And in the world climate post 9/11, the hype over the threat from the so-called jehadi forces and our obsession with Pakistan have created a near-hysteria over the Islamic terrorist, ignoring all other issues. Thus the violence unleashed by the hitherto unknown outfit, simi, is worrying.

Yet, for nearly four decades now, blood has continued to spill in remote tracts of the country. Most of these 'terrorists' are not Muslims but Dalits and Adivasis and other marginalised sections of society often led by middle-class comrades steeped in the teachings of Marx and Mao. Their methods, however, often invoke revulsion rather than sympathy from the public at large. Most often, it's an eye-for-an-eye philosophy. The PW, for instance, claims the Naidu government has killed more than 1,400 of their cadre in fake encounters since 1996. Its attack on Naidu was intended as a message that the state can't finish it off so easily.

Yet the incident also served to expose the deep fissures between the different Naxalite outfits. The CPI(ML) Liberation, for instance, which has a strong presence in Bihar and came 'overground' in 1992 to contest elections, is sharply critical of the PW action. Says Swapan Mukherjee, central committee member of the Liberation group, "We see the attack on Naidu as a desperate action that will unleash the repressive state machinery. Sometimes we think the PW is waging a people's war against the people."

Indeed, there's an amusing exchange of polemics in the party organs of the two Naxal groups.Addressed to 'Comrade Anarchist', the latest issue of the CPI(ML) mouthpiece Liberation has printed a lengthy rejoinder to a critique published in the PW organ People's March. The piece, generously peppered with terms like 'petit bourgeoisie', 'proletarian leadership', 'working class' and 'Comrade Lenin's views', is a robust defence of the Liberation group's decision to come 'overground' and winds up throwing slurs on the PW such as "your petty bourgeois class character shows everywhere!".

The quaintly outdated jargon is a pointer to the entire Left movement's struggle to remain relevant in a polity increasingly veering towards the conservative right. But they cannot be written off as long as their raison d'etre exists. Intelligence sources also point to linkages with other underground outfits—from Sri Lanka to Nepal. Their methods range from the primeval to the modern. Intelligence expert B. Raman, for instance, stresses the need to monitor the cyber activities of these groups. He points out that a website linked to the PW posted a death threat on October 4 to the CMs of Andhra, Jharkhand and West Bengal.

Clearly, repressive police action has not worked. If anything, it may have alienated people further in Naxal pockets. To even begin to solve the problem, say experts, one has to address the root cause. But slave to the drama of electoral politics, the Indian State has till now been a colossal failure in tackling problems of poverty, health, education or exploitation. There is no reason to believe this will change. The wound will fester.