A Mild Sparkle Of Hope

It's a happy Diwali as Hindus and Muslims, aided by committed individuals, rebuild communal ties 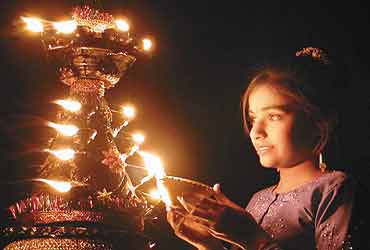 outlookindia.com
-0001-11-30T00:00:00+0553
At last, there is some good news from Gujarat. The traditional resilience and spirit of its people is at work today, bridging the communal divide the politicians had fanned not so long ago. So, it was with barely-concealed contempt and rejection of the VHP/Bajrang Dal pamphlets advocating the economic boycott of Muslims that the Gujarati set out shopping this Diwali.

In Ahmedabad's cramped Dhalgarwad garment district, hundreds of Gujarati women, all Hindus, haggled as usual with bearded Muslim shopkeepers. "Why should I bother if the shopkeeper is a Hindu or a Muslim, or how he looks?" asked Ramila Parikh. "I am interested only in the designs and the price tag of the dresses he is selling." The scramble was all-pervasive, be it in the Muslim-dominated Phool Bazaar or in the rows upon rows of cracker shops which are also run by Muslims.

Even restaurants which had been reduced to ashes in the March riot are back in business. "I don't ask the owner's name when I go to a restaurant," quips Pratik Patel, as he settles in for a meal at the crowded Tulsi restaurant, one of the establishments which was destroyed completely by the rioters.

And if Muslims and Hindus embraced each other, though briefly, in Ram Rahimnagar in Shah Alam, it marks a significant step towards the affected areas returning to normalcy. And it's all thanks to hundreds of faceless individuals and scores of NGOs who are putting in a slow but determined effort to rebuild communal harmony. Says Mira Rafique of the Centre for Development, a small NGO which operated for a while in the Shah Alam area: "It is a huge task. I know my effort is only a drop in the ocean, but every such drop will fill up the reservoir of human compassion."

Mira understands the importance of cooling communal temperatures. Her husband Rafique is a Muslim and both were, ironically, saved from rampaging mobs by Hindus. "We work for the economic empowerment of poor Dalit and Muslim women. It's after days of discussion and persuasion that I've finally been able to get women of both communities together to restart the sewing classes our NGO runs," she says. "Now, there are 37 Muslims in our class of 70."

In the Shah Alam area which saw much rioting, the Muslims are still hurt and did not celebrate Diwali as they used to every year. Winning their trust back is difficult. But the likes of Sanjay Bhave have not given up. A lecturer in an Ahmedabad college and a spirited human rights activist, he says, "When you are up against a government that continues to add insult to injury, efforts at communal harmony seem to be impossible. But mind you, there are many NGOs and individuals who are and will fight this unequal battle."

For, the calm is tenuous in the still-prevailing atmosphere of suspicion and pent-up anger. "Even a spark can inflame passions," says Mira. Evidence of this came 48 hours after Diwali when over a dozen shops and as many vehicles were set afire by mobs in Jamalpur in Ahmedabad. The violence, that's left 15 injured, has spread to a few more areas of the city. "I don't know how and from where the mobs came so suddenly. I heard there was a tiff between some people and within no time people collected and set the shops on fire," says a scared Firozebhai Shaikh, a Jamalpur resident who has a textile manufacturing unit in Danilimda in Ahmedabad. "I think it's all politically motivated. It seems outsiders are paid to create trouble from time to time."

Firozebhai was among those who went to wish their Hindu friends and neighbours on Diwali. "There is no ill will among ordinary people," he says. There's just deep suspicion. As Alok Ghadgekar, a resident of Chharanagar in Ahmedabad and associated with peoples' theatre group Darshan, discovered when he set about producing three short plays with the children here.He had invited some 15 kids over for lunch at his home. "When I started talking to the kids, they looked at me with suspicion and questioned me," says he. "It even took a while convincing the parents, who suspected that I may mix poison in their food. Now, they trust me and enthusiastically come to see when I practice the plays with their kids."

Mira, Alok and Sanjay's efforts may appear minor but they go a long way in cementing trust. Zubeida Mohammed Idris, who lost her husband in the riots, doesn't hold any grudge against her Hindu neighbours. "No, we aren't afraid of our neighbours. How can we be? Many of them saved us, and so many of them also ran for cover along with us. We fear the politicians." Agrees Kamruddin Rangrez: "Nothing has ever happened here. Hindus and Muslims have been living together for two to three decades. The trouble was created by people from outside."

This xenophobia sits strong among others in Naroda Patia. "Who knows what may happen anytime?" asks Mohammed Salim. "You might suddenly see crowds trooping into your locality out of nowhere," he says. Flanked by his Muslim neighbours, Muralilal Yadav adds, "Our entire locality ran when we heard about the Akshardham incident. The VHP also gave a call for bandh. Whenever it calls for a bandh, something is sure to happen. So we escaped." But Muralilal does say, "I have full confidence in my neighbours. They will never kill me. In fact, they will save me if they can." It is this faith in human goodness that is helping the Muslims in Gujarat put their nightmare behind them and look ahead to a better future.