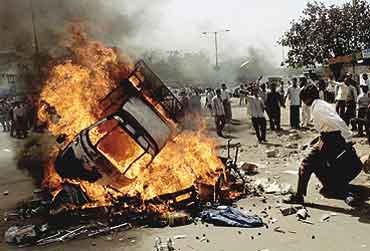 The Sangh Parivar— A Reader
By Edited Christophe Jaffrelot
Oxford University Press Pages: 445; Rs 675
This book belongs to a series on critical issues in Indian politics, with 20 articles on the RSS and its fronts, including the youth wing, women’s wing, trade unions, and its federative and political organisations. The volume is less a ‘reader’ than a compendium of articles gleaned from published work, dating mainly from the mid to late 1990s. Older extracts are from Anderson and Damle’s Brotherhood in Saffron (1987), and Graham’s study of the Jan Sangh (1990). Only two articles, on the Swadeshi Jagaran Manch (Boutron) and the RSS global network (Therwath), seem to have been written specifically for this volume and carry a contemporary flavour—the latter gives readers a brief introduction to the extensive financial support for the RSS from NRIs located in the western world. Even the editorial introduction takes scant notice of the ramifications of the 2002 Gujarat pogrom and the 2004 election. There is an article on ethics but it addresses Hindutva’s resonance with capitalism, rather than raise questions about private and public morality, ends and means or organised violence. And there is no index, a glaring omission in a long and thematically dense volume.

It is arguable that the chief characteristic of the so-called parivar is its paramilitary organisation and style, borrowed from the fascist movements in Europe of the ’20s and ’30s. Right-wing totalitarianism and the second world war have had a lasting impact upon global politics, but the RSS has surely enjoyed the greatest longevity of the chauvinist paramilitaries born during the troubled ’20s. Defined succinctly, its goal is the militarisation of civil society and the subjugation of secular citizenship to the warrior cult. Paradoxically, it is the shadowy zone of nationalist militarism that provided the space for the osmosis between left and right radicalism—Subhas Bose is only the most glaring symbol of an uncomfortable reality, rarely spoken of. The emergence of a rampaging right wing cannot be understood purely in terms of its internal organisation and ideas, but must be placed within a larger political and structural context. The interests, strategies and alliances of the Congress, left-wing and regional parties is one contingent factor, the iniquitous social relations and endemic informality in employment (manifested in patriarchy and caste), are another. Had it been taken into account, the broader context might have yielded insights for designing a volume such as this.

This book appears three years after the gruesome events of Gujarat in 2002. It would have been appropriate to have included recent assessments and fresh data on the role of RSS and its fronts in the violence, not to mention its own statements and interpretations. I have in mind the Report of the Concerned Citizen’s Tribunal, and numerous other citizen’s reports that have appeared since then. These, and Varadarajan’s Gujarat: The Making of a Tragedy (2002) contain eyewitness accounts, analyses and source material that could have been used in some way. The text of Prime Minister Vajpayee’s speech in Goa is an example. Again, it is fairly well-known that brutality towards their designated enemies is a matter of pride for Hindutva cadre in their street-level propaganda. Commissioned case studies of rumour, small talk and election speech by the Sanghis would have been a valuable addition for the book, and made it more of a reader.

That said, Sangh Parivar contains a great deal of information on the activity of the RSS and its fronts in post-1947 India. Tanika Sarkar’s essays on the gender predicament of the parivar are informed and insightful. She has also contributed one of three very cogent articles on education. There are two valuable, though slightly dated, articles on the Bharatiya Mazdoor Sangh by Kiran Saxena and Jaffrelot. Two short extracts from Manjari Katju’s study of the VHP introduce the reader to an important activity of the RSS. The editor also has a contribution on the VHP that highlights its psychology of imitation, which he names ‘strategic mimetism’. He is keenly aware of the parivar’s strategic use of symbols and icons. But his analytical stance is diffident: "The components of this nebulae are more autonomous than one may think at a glance", "the RSS complex hardly form a family". Yet, their "tensions must not be over-emphasised", and publicising internal differentiation could also be a "well thought out strategy for attracting support". The BJP may emerge as the dominant party of the Centre, and then again, it might not. His own extensive researches (not to mention the 2002 events) could have led him to more definitive conclusions. Despite its flaws, Sangh Parivar is a useful collection for students of political conservatism.