A Mere Flick Of The Ash

So, Bennets turn Bakshis. For the rest, 'Bride and Prejudice' undoes Austen's pride. 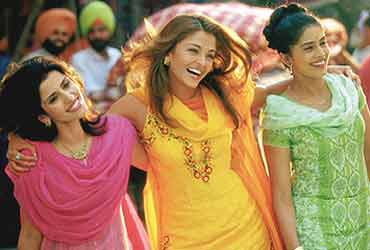 outlookindia.com
-0001-11-30T00:00:00+0553
The superficially clever renaming of Jane Austen's novel should be warning enough of what to expect at a screen near you later this year. Not because a serialised Indianisation of English icons is in itself a bad idea—Gurinder Chadha has now done the beach, Beckham, and now Jane Austen, and may she grab more. But in the end it is uncertain how much better Bride and Prejudice was than merely a good idea.

"Just forget about Bend It Like Beckham when you watch this," Chadha announced at its first screening in London last week. Because this would be different, it would be the story of the Bennet family from Hertfordshire of the early 19th century transferred to the Bakshis of Amritsar in the 21st. What London was to the countryside then, Los Angeles and a new NRI London would be to Amritsar.

This would be different also because the style is an idea of Bollywood. Countryside balls of Hertfordshire where so much happens transfer easily enough into dance parties in Amritsar, though how many Amritsaris do the garba is another matter. To the transposition of novel to cinema, add a transliteration of milieu from Victorian to Punjabi.

The transfer follows Austen's novel pretty closely all the way, even to the extent that Darcy is called Darcy, appearing here as a crass American, not the uppity Englishman. Wickham too gets to keep his name besides his wicked ways.

Reading the novel cannot, of course, be as mandatory as the cinema ticket, even if Bride sets out to follow Pride this closely. Ideally, the film should stand both alone and as a rendering. The suggestion of many who saw it is that it doesn't stand straight as either. It seems in different ways to do as little for the Austen-literate as for her many non-readers.

In the bare plot of the novel, Mrs Bennet is anxious to get her daughters married. Bingley arrives in the neighbourhood as a suitable match for Jane. His rich and proud friend Darcy talks him out of it because he finds the Bennets low country folk. Darcy likes Jane's younger sister Elizabeth, though, but she detests his snobbish ways. She also naturally turns down the comical Collins. Wickham elopes with the younger Bennet sister Lydia, and the good side of Darcy emerges when he prevails on Wickham to marry her. Eventually Darcy sees the follies of his pride, and Elizabeth of her prejudices. Darcy marries Elizabeth, and Bingley, Jane.

In Gurinder Chadha's hands, Balraj (Bingley, Naveen Andrews) arrives in Amritsar from Los Angeles with the American hotelier Darcy (Mike Henderson). Balraj likes Maya (Jane, Meghna Kothari), and there is tension, or in Amritsari, 'tashn' between Darcy and Lalita (Elizabeth, Aishwarya Rai). But Balraj and Darcy return to LA and it is only after the Bakshi sisters visit London and LA on the invitation of Kohli (Collins, Nitin Ganatra) that some sort of crisis develops by way of a punch-up between Darcy and Wickham (Daniel Gillies) in a cinema hall and successive slaps for Wickham from two Miss Bakshis.

The plot does not make a film any more than it does a novel. The quality of the novel is in the texture of the interaction among characters and their ideas. "Now be sincere," Elizabeth says to Darcy in the end. "Did you admire me for my impertinence?" "For the liveliness of your mind, I did," Darcy replies. It is largely Austen's creation of that mind that gives Pride and Prejudice its character, and makes of it such a celebrated novel.

The film script is another story. In snobbery as directed by Chadha, Darcy wants to know if it's safe to eat a pakora because he doesn't want Delhi belly on his first day in India. He says rude things about arranged marriages. Lalita defends it as a global dating service, and so no different from western ways. Darcy says people pay $500 a day for one of his hotel rooms.That's more than what a lot of Indians earn in a year, Lalita replies by way of lively repartee. Nothing wrong in having standards, he says. So long as you don't impose them on others, replies she. Later, Darcy gallantly gives his first-class seat to Mrs Bakshi to seat himself next to Lalita in economy class when they all happen to meet at Heathrow en route to LA. How can anyone sleep in economy class, Darcy wants to know. Lively Lalita says she will sleep 10 hours in a 10-hour, 53-minute flight. 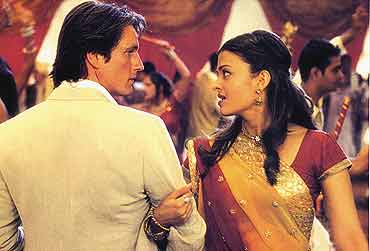 A film that grandly declares itself inspired by Austen's novel deserved something better than this for screenplay. After taking on an interesting idea, Chadha deserved to give herself a better scriptwriter than herself. Some of the better lines come straight from the novel; pity that Austen could provide no NRI material for Chadha to lift. What should have been the strength of a film like this emerges as its weakest link.

Austen aside, it's hard to see what this kind of script can do for anyone other than feeding a British audience yet more cliches of their idea of ways Indian. This is the flip side of Indianising icons; every such feed adds to a reduction. Within this adventure, Indianness is reduced, and by the same failing, Elizabeth is reduced. Far from the style of Elizabeth, Lalita emerges as a singularly dumb creature.

Here Aishwarya, such as she is, seems to fit the script, such as it is. She never gets past that 'look-at-doe-eyed-me' look. She rode a chariot that her admirers made for her when she became Miss World, and she hasn't gotten off it yet. She looks afraid that a real expression would mark her as a woman of the world rather than the lady on the chariot. Her expressions seem to halt in the early stages of formation; who knows which particular look might trap her in an unflattering snapshot? She travels the world a prisoner of her facial paint.

Chadha's shadow of the book limps along in faltering episodes that fail to hold together, or to hold the audience. The characters only move from one country to another without appearing much moved in their selves. At the heart of the story is the idea of giving up pride and letting go of prejudices. Elizabeth sees how hearsay and her own misjudgement led her away from truth. She thinks she was "blind, partial, prejudiced, absurd", "I, who prided myself on my discernment". Nothing much happens to Chadha's characters. They're comfortable 'passengers' (pardon the Punjabi!), just transferring from a jumbo jet to a couple of elephants in Amritsar for the shaadi in the end.

The faux-Bollywood style doesn't quite pull off either. The song-and-dance sequences seem to follow the dumb end of Bollywood style. Coming to Bollywood, as it has so regrettably come to be known, the film probably needed Madhuri Dixit, and screenplay of the Farhan Akhtar class. The script is self-consciously synthetic, the lyrics flat when audible, the music forgotten as you hear it, the film forgettable once you've seen it. The idea of adaptation wasn't bad, the adaptation is. It is a translation that fails both languages.