A Masjid For Sajida 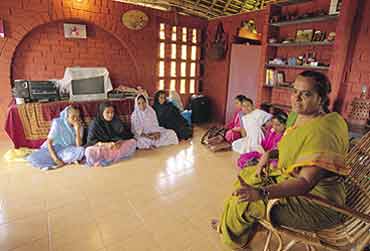 outlookindia.com
-0001-11-30T00:00:00+0553
Around 50 women have gathered for the fifth meeting of the Tamil Nadu Muslim Women's Jamaat Committee (MWJC). The first women's jamaat in the world may well lead to the first women's mosque in history. The meeting begins with Rajab Nisha reciting prayers in Arabic to echoes of 'amin'. Slowly the register shifts to intelligible Tamil as Nisha prays: "May Rahman strengthen the women's jamaat! May Rahman weaken the male jamaats that ruin women's lives!" More amins.

Daud Sharifa Khanam, who heads the Pudukkottai-based STEPS Women's Development Organisation, introduces a frail woman from Mukkanamalaipatti village called Sajida Banu, 22. "Sajida is smiling now. Do you recall how she came to our last meeting?" The women shout in unison: "She came crying."

Sharifa: "Do you know why she is smiling now? She has sent her man to jail." Sajida was a victim of dowry harassment—an un-Islamic practice—and the local jamaat refused to sympathise with her. After the MWJC intervened, an fir was filed and her husband was jailed.

Tamil Nadu has a unique system where jamaats, affiliated to the local mosque, sit in judgement on the domestic affairs of the community. A jamaat is essentially a citizen's council, but in TN it functions as a powerful dispute-settlement authority. The jamaat committees have no women on board; nor do they allow women to represent their own cases. When a battered, harassed woman approaches the local police for help, she is turned away.

Says Rahmatunissa, who sought the help of the MWJC recently, "Even the all-women police station asked me to obey the local jamaat: 'Your law is like that, what can we do?' they said." Rahmatunissa's husband, Varusai Muhammad, had two 'stepneys'—meaning mistresses. Life in purdah left Rahmatunissa unaware of her partner's ways for 10 years. After five years of separation, she realised her husband had sent a 'talaq letter' to the Al Jamiul Munavvar Masjid Jamaat Committee, Kattuthalaivasal, Karaikudi district, three years ago. The symbolic settlement offered to the jamaat was the customary Rs 1.25. Varusai has since remarried, while the wmjc is fighting for a decent settlement for Rahmatunissa.

As the nation debates triple talaq, Tamil Muslim men have been issuing talaq through e-mail, letters and telegrams, which are upheld by the jamaats. The steady stream of victims of dowry harassment, arbitrary talaqs, domestic violence, child abuse, sexual harassment and cheating—each with a common enemy in the form of the local jamaat—coming to STEPs, which has been working on women's issues since 1989, forced Sharifa to consider tackling male-dominated jamaats. As she explains, "The male jamaats are unlawful kangaroo courts that play with the lives of women. A mosque-jamaat axis is a power centre that controls the community. When women are refused representation here, we have no choice but to have our own jamaat. And since a jamaat is attached to a mosque, we have to build our own mosque."

A benevolent jamaat in Parambur village granted land for the women's mosque in November 2003. Following media reports, there was pressure from several quarters, including Delhi's Jama Masjid, on the Parambur jamaat to rescind. The resolute steps team established the Tamil Nadu Muslim Women's Jamaat Committee on February 18, 2004.

Today, with 35 members from the state's 10 southern districts, the jamaat has ensured justice for several women. Still, the steps team is finding it difficult to raise money to get 10 acres for the mosque. They have managed to raise Rs 1 lakh—a fraction of the Rs 25 lakh required for the land and Rs 50 lakh for a mosque with a trained woman priest. Says Sharifa, "Our needs go beyond prayers. The mosque will function as a space where women can meet, relax and share their problems.It will also serve as a home for destitute women and children."

Adds Rasheeda Begum, a researcher with steps, "In male-dominated mosques all they want to ensure is that the women who are begging are clad in burqa. Their uplift is not the mullah's concern. For us, the mosque is about gaining self-respect and dignity."

Tamil Nadu's male-controlled jamaats seem unimpressed. Says M.H. Jawahirullah, president, Tamil Nadu Muslim Munnetra Kazhagam, "Women should have the right to offer prayers in mosques. In at least five per cent of TN's mosques there are separate enclosures for women. But a women's mosque is unacceptable. Besides, not all jamaats are anti-woman." Also, women cannot be represented in jamaats, he adds.

Meanwhile, Tahir Mahmood, a Delhi University law professor, welcomes the initiative, saying, "The teachings of Islam allow for Muslims to manage their own affairs through the jamaat, but jamaat-led dispute settlement is not universal. In UP, Delhi and several states, jamaats do not determine a community's affairs. But I've heard the stranglehold of jamaats in TN is severe. Such usurpation of legal powers by the jamaats must end."

Syeda Hamid, an ncw member who attended a steps meeting this year, sees the stirrings of hope. "Winds of change are blowing from Pudukkottai. Women are asserting themselves within the ambit of Sharia. They are

no longer victims." Rajab Nisha, a key member of the MWJC, hopes those winds reach Delhi soon: "Mosque apart, we have a long list of demands. Rajiv Gandhi bowed to the demands of Muslim men, but we hope Sonia Gandhi will lend us her ears." The mosque is but a necessary symbol. The real struggle is for Muslim women's self-respect "within the framework of Islam".