A Martial Spirit, All In Vein

Punjab's hardy 'sons of the soil' are nowhere to be seen. A corrosive drug culture rules. 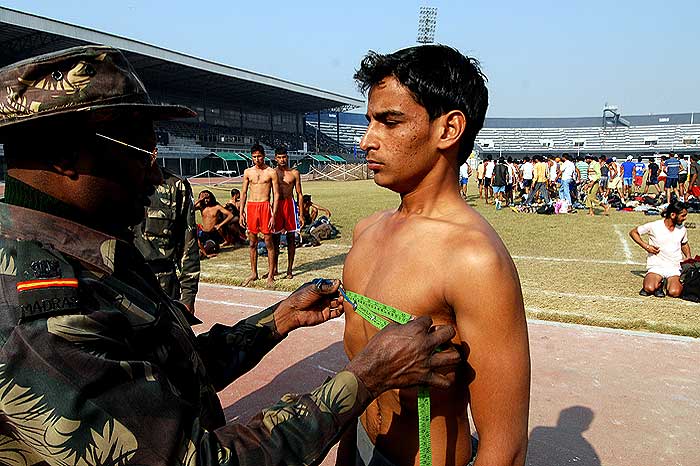 Punjab is the land of milk and honey that produces tall, strapping, healthy young men, who are, naturally, the best recruits for India’s uniformed forces. Right ? Wrong. Alarm bells rang in May 2009, when the Border Security Force (BSF) conducted a recruitment rally in Bhikhiwind in Tarn Taran to fill 376 vacancies for constables. Even though 8,600 young men had turned up, the BSF failed to find enough suitable candidates and had to surrender as many as 85 vacancies. Commandant Ajit Kumar, who conducted the recruitment, told Outlook, “The physical structure of the boys was very poor. They appeared undernourished and pigeon-chested. Most could not run the mandatory 1,600 metres in the given time.”

A year-and-a-half later, the fact that Punjabi boys are flunking recruitment tests by the army, the BSF and the police is a constant refrain across the state. You hear, in almost the same breath, another lament, in village chaupals, government offices, hospitals, colleges, political party offices and even out in fields: that drug addiction is steadily eating up Punjab’s youth. In most eyes, the two trends are closely intertwined. Indeed, many see drug addiction as the next major crisis facing Punjab after terrorism; and nothing less than a social time-bomb.

It was actually with the decline of terrorism that Punjab’s date with drugs began. Explains Ravneet Bittu, the Congress MP from Anandpur Sahib, and the grandson of Punjab’s slain chief minister Beant Singh: “Several IAS and police officers in Punjab made huge fortunes during the terrorism years, when they exercised unprecedented power across the state. Once terrorism ended, these people got into the drugs business to maintain their lavish lifestyles.” Bittu articulates something that has been whispered in power circles for some time now. Many bureaucrats, he alleges, operate drug franchises for distribution, making it difficult for law-enforcement agencies to catch them. Although there has been no comprehensive study yet to determine the number of drug addicts in the state, a couple of surveys conducted by the state health department has thrown up the fearsome estimate that between 50 per cent to 60 per cent of young people between the ages of 16 and 35 are addicted to drugs. 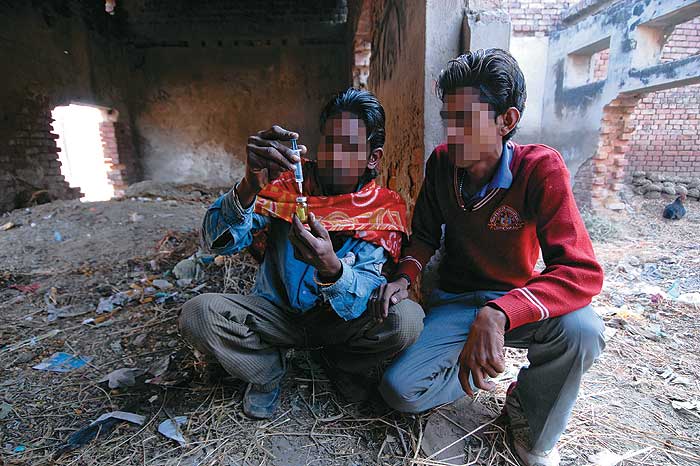 Correspondingly, there has been a steep rise in narcotics-related crimes such as the activities of smugglers and criminal acts by drug peddlers and addicts. A recent study by Dr Ravinder Sandhu of Guru Nanak Dev University shows that the incidence of such crimes in Punjab is nine times the national average. Between 1999 and 2008 (the years when Punjab was recovering from the aftermath of terrorism), such crimes registered a staggering 245 per cent increase. Punjab became the state with the highest number of narcotics-related crimes, surpassing Mizoram which earlier held this dubious distinction.

“Several IAS officers and cops made fortunes in the terrorism years. Once it ended, they got into the drugs business.”
Ravneet Bittu, Anandpur Sahib MP

With young people between 16 and 35 comprising, according to estimates, nearly three-fourths of Punjab’s addicts, it’s not surprising that recruitment officers, who routinely conduct physical endurance tests on young men, are drawing attention to their declining fitness levels. Deputy Inspector-General of Police L.K. Yadav, who has headed several Punjab Police recruitment boards, minces no words. “The physical standards of Punjabi youth have fallen drastically, and the principal cause of this is rampant drug abuse.” Take the 1,600-metre run which candidates appearing for the army, the police and the BSF have to complete in a given time, the most preferred being 5 minutes and 40 seconds. Yadav estimates that 40 per cent of the boys showing up are so lacklustre that even with training, they cannot do the run. Some reveal themselves as addicts in embarrassing ways. At a rally conducted by the army at Ludhiana in July last year, one candidate shot ahead of the others in the first 400 metres, but collapsed at the start of the second round. “We all egged him to get up and complete the run since he was doing so well,” recalls recruiting chief Col Sharad Dhindaw, “but the boy confessed that the effect of the pill he had taken in the morning had worn off!”

At the BSF’s sector headquarter in Jalandhar, IG Himmat Singh says, “Even candidates who look tall and well-built lack the natural stamina expected of 20-year-olds.” Across the board, the recruiting officers of different forces say that though they generally manage to fill their quota of vacancies (rampant unemployment ensures that thousands turn up for recruitment), overall standards have plummeted.
Ajit Kumar was foxed when he found that 30 per cent of the boys he had selected were rejected in the final medical examination, because of high blood pressure and varicose veins. Why would so many have ailments that usually afflict middle-aged men? Neither the BSF nor army doctors are tasked to analyse the ‘why’ of such a trend. But Dr Rana Ranbir Singh, who heads the Opiod Substitution Therapy (OST) programme at the Civil Hospital in Tarn Taran, one of the worst drug-affected districts, believes that addicts who have somehow managed to make it to the ‘final medical test’ stage of selection and have stopped taking their fix for a day or two, suffer withdrawal symptoms, resulting in irregular BP and pulse rate. Then, he points out, many young boys in the border areas of Punjab inject themselves with synthetic drugs in the groin or femoral region, often resulting in venous sclerosis, which could, he feels, be mistaken for varicose veins. 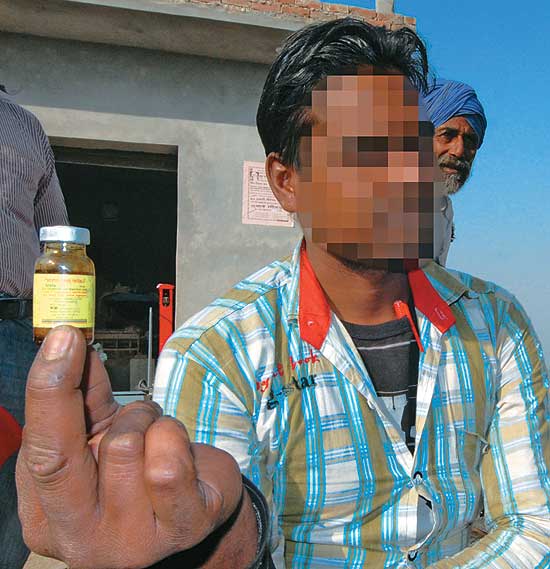 Drugs and politics are a lethal combination, and myriad manifestations of this association can be seen in Punjab today. During elections, for example, it is rare to find a candidate who does not distribute opium and alcohol. On the flip side, a number of younger politicians have sniffed political opportunity in stepping up the fight against drugs, such as Ravneet—currently on a 1,500-km anti-drug walkathon through the state—and Sukhpal Khaira, Congress legislator from Bholath, who has set up several gyms in his constituencies “to get young men interested in building their bodies instead of succumbing to peer pressure and getting hooked on drugs”. For that matter, deputy CM Sukhbir Badal routinely announces initiatives taken by his government to wean away young people from drugs.

Nonetheless, post-terrorism Punjab has emerged as a major transit route for Afghanistan opium on its way to European markets via Delhi and Mumbai; this was noted by the United Nations Office on Drugs and Crime (UNODC) as far back as 2005. The BSF, recovering between 100 and 120 kg of heroin annually for the last few years, reports an escalating trend. Consider this: in May 2010, the BSF intercepted a single consignment of 65 kg being pushed through a pipe fixed into the border fence. Four armed smugglers fired at the BSF men and two died after they returned fire. “The firing by the smugglers was unprecedented and indicates a high level of motivation to get the contraband across,” says Himmat Singh. In the past two years, drugs worth Rs 800 crore have been seized and officials estimate that at least Rs 2,000 crore worth of the contraband could be transiting the state each year. Last year, the BSF arrested Sarabjit Singh, a sub-inspector in Ferozepur, when he was caught red-handed receiving a consignment of heroin smuggled across the fence. BSF officers admit that they were under a lot of pressure to scuttle the incident, and though an FIR was registered, the policeman was released on bail the very next day.

Curiously, very little of the smuggled heroin seeps into the Punjabi countryside, save the border districts of Amritsar, Tarn Taran and Ferozepur. Much of Punjab is hooked on to synthetic derivatives of morphine, sedatives, anti-allergents etc, sold through an illegal network of village chemist shops. As policemen freely point out off the record, the chemists receive political patronage. There is a widespread conviction among Punjabis that the drug addiction is yet another strategy from across the border, in Pakistan, to ruin Indian Punjab. There is little evidence to back such a view, but it seems to have become a convenient alternative to looking at the rot within.

A Quiet Day In Heaven