A Manuscript From The Blue

The Squadron is celebrating its diamond jubilee. We look at some obscure, amusing and historic tales it scripted in these 60 years. 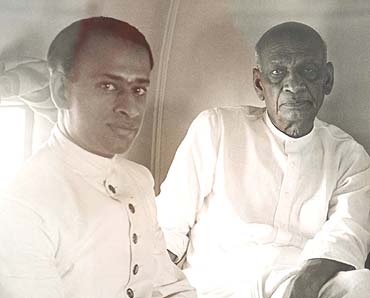 On a cold December evening in 1977, as the Tupolev-124 aircraft banked its wings towards Jorhat, Squadron Leader C.K. D'Lima heard a crackle over the radio abruptly telling him to land in Jorhat instead of proceeding to Tezpur, his original destination. Sitting at the back of an aircraft lacking in creature comforts was Prime Minister Morarji Desai. His presence on the plane was strong reason for D'Lima to be worried. The sun was already dipping as D'Lima prepared to land at the rudimentary Jorhat airstrip, which was not prepared for a night-landing. 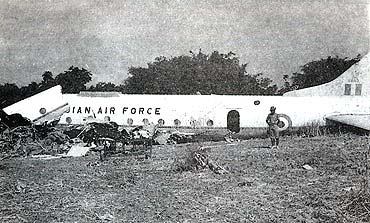 The TU-124 that crashed in '77. It was a narrow escape for new PM Morarji Desai

What followed in the next few minutes was an incident that found no mention in official records, but became the stuff of legend. As the aircraft approached for landing, a sudden 'down draft' pushed it down. Its nose wheel ploughed into the treetops, sending the carrier into a death roll. A few minutes later, as rescuers ran towards the wreckage on the ground, a few survivors emerged. Among them was the prime minister. Five of the aircrew, including D'Lima, perished. At the cost of their own lives, the aircrew had succeeded in saving the VVIP passenger, and averting what could have been one of the worst disasters in Indian aviation. For the men in white flying suits of the Air Headquarters Communication Squadron, to which D'Lima belonged, saving a PM who led a Janata government that had recently ridden to power on an anti-Emergency sentiment was an epochal event. 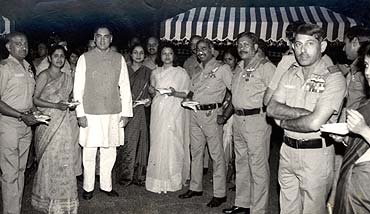 The year 2007 is a significant milestone for the squadron. Born in the same year India gained Independence, it is now 60 years old, and has notched up thousands of flying hours as the official carrier of presidents, PMs, cabinet ministers and service chiefs since January 1947. In many ways, the squadron's history, studded with glorious moments, is India's history.

In May 1950, a Devon aircraft from the squadron took off from Kochi on a delicate mission. On board was the ailing Union home minister Sardar Patel and with him, Chithira Thirunal Balarama Varma, the Maharaja of Travancore, who was being persuaded to sign the instrument of accession. Infected by the patriotic fervour of the times, the squadron went out of its way to help the Sardar carry out his mission of persuading princes and kings to swear allegiance to the nascent republic. The squadron pressurised the cabin of a Dakota—considered a technological feat at the time—to ensure that the ailing Sardar could be ferried all over India with ease. A heart specialist was always on board as the squadron criss-crossed the country with the Iron Man. In 1949, Flight Lieutenant K.G. Bhim Rao saved Patel's life by successfully crash-landing a Devon aircraft. The Constituent Assembly gave him an 'appreciation-on-record'—an unprecedented honour, never to be repeated. 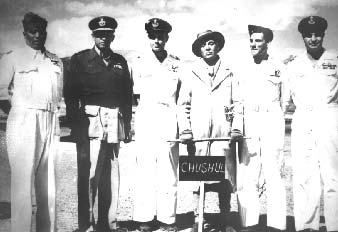 On March 14, 1947, Jawaharlal Nehru, as the "Vice-President of the Interim Government of India", took his first flight with the squadron to survey the riot-hit areas of Punjab. It was a flight, the squadron's history says, that moved Panditji to tears. Later, his daughter Indira Gandhi also flew frequently with the squadron. That includes a memorable flight with all lights switched off when her aircraft took off in the middle of the night in December 1971, as the war with Pakistan erupted on both fronts. With Pakistani aircraft strafing Indian airfields, pilots of the squadron thought it prudent to ferry her back in a pitch-dark cabin. 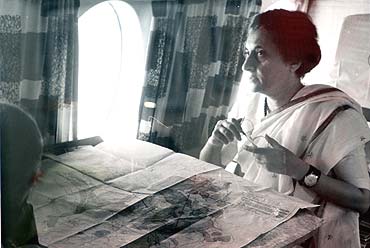 Indira Gandhi on a recce of flood-hit UP in '66

Besides ferrying Indian premiers, the squadron has played a vital role in mid-air diplomacy, carrying foreign dignitaries such as British PM John Major and Chinese premier Zhou En Lai. It also made a secret trip to Tezpur to ferry the young Dalai Lama, who had just arrived there after a successful escape bid from Chinese-occupied Tibet, to Delhi Nelson Mandela has been a passenger, so have Boris Yeltsin and Aung San Suu Kyi.

The squadron's brush with leaders and vips has generated a special fund of humorous anecdotes. Air Vice Marshal S.S. Malhotra, who had one of the longest stints on the squadron and served as its commander, has vivid memories of ferrying the Shah of Iran twice. "On each occasion, he had a different begum," he recalls. Once, as Malhotra prepared to take off from a small airfield in UP with home minister Govind Ballabh Pant, "the minister rushed into cockpit asking us to stop saying that his 'key man' was yet to arrive". The crew was left wondering who his chabi-wallah was. It finally turned out to be Pant's personal secretary. More recently, a catering assistant on board was overheard inviting President A.P.J Abdul Kalam to attend his wedding. Kalam couldn't make it, but sent flowers and a message delivered by the local district magistrate. The fund of stories will grow and grow as the squadron continues its work, quietly leaving its indelible imprint on a nation's history.

A Sting Without Venom