A Man Of Many Parts 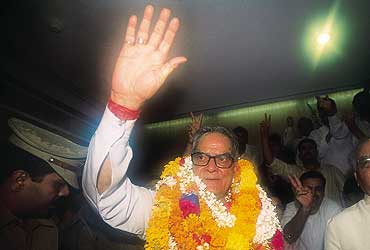 outlookindia.com
-0001-11-30T00:00:00+0553
It was more like a celebration after a chief minister is sworn in. Soon after he was elected India's 12th vice-president, Bhairon Singh Shekhawat drove to New Delhi's Rajasthan House, where he was greeted with slogans, garlands and sweets. Supporters from his home state congratulated him. Shekhawat was enjoying his moment of glory. Soon, a group of eunuchs arrived. Not one to hide in his room, the 78-year-old Shekhawat came to the porch and heard some singing in his honour. As he turned to leave, a eunuch, hoping for some baksheesh, said, "We have felicitated you. Now what about our felicitations?" Without batting an eyelid, Shekhawat replied, "I have only been elected, I have not been paid as yet!"

Shekhawat is known for his quiet sense of humour. And he will need a lot of it when he presides as chairman of the Rajya Sabha where the ruling NDA is in a minority. Asked how he would tackle it, Shekhawat smiles and says, "I have been in the assembly and know how to deal with the Opposition." To the surprise of many, the number of votes cast in Shekhawat's favour, despite his Jan Sangh background, proves that he has friends in the Opposition. Shekhawat won 454 out of the 766 votes, romping home with a margin of 149. This is 25 votes more than the NDA's electoral college.

Later, when Lok Sabha Speaker Manohar Joshi congratulated him, saying "Aapne kya chamatkar kar diya (you worked some magic!)," Shekhawat replied, "Congress ki kripa hai (It's all thanks to the Congress)." The two then hugged each other, with the VP-elect commenting, "First Joshiji was a CM and now he presides over the Lok Sabha. I was also a CM and now I am chairperson of the Rajya Sabha."

It is precisely this kind of disarming charm that the Congress is apprehensive about. Congressmen are the first to admit that despite the gentleman persona, Shekhawat is a committed BJP member. Observes a senior Congress MP, "We have to deal with the Shiv Sena in the Lok Sabha and the Jan Sangh in the Rajya Sabha." Buta Singh, Congress MP from Rajasthan, also feels that "he is a hardcore BJP member and we are worried about that". Counters Shekhawat, "The Congress is not worried about my Jan Sangh credentials. They are worried about the cross-voting." But he's quick to add that he would not be playing partisan politics now that he is the vice-president. "When I filed my nomination, it was not as a candidate from a particular party. Main rajniti chhod ke sabse bada tyaag de raha hoon (I have left politics. It is the biggest sacrifice)."

Shekhawat's friends cut across party lines. Not many people know that he played local guardian to Laloo Yadav's daughters when they were studying at Mayo College, Jaipur. Many of his friends naturally came forward to support his candidature. Former PM Chandra Shekhar campaigned for him, the NCP's Sharad Pawar and Praful Patel were among the first visitors at Rajasthan House and Jayalalitha phoned in to congratulate. When Shekhawat thanked her for her vote, she replied with uncharacteristic humility, "It was just a drop in the ocean."

Shekhawat's relations within the BJP has been a subject of much discussion. In the BJP's scheme of things, he belongs to the Vajpayee camp. The two are close friends. Shekhawat was Vajpayee's choice to replace Kushabhau Thakre as party chief but this was shot down by the RSS, which at that point was not kindly disposed to Shekhawat. As Rajasthan CM, he had taken on the RSS many times while handling communal riots in the state. Later, the PM offered to bring Shekhawat to the Centre as deputy chairman of the Planning Commission or as a cabinet minister without portfolio. He refused both offers. He made it clear he was too senior to serve in a position junior to L.K. Advani. If he was coming to the Centre, then it had to be at a senior position.

But Shekhawat's candidature for vice-presidentship was a unanimous one within the party. When parliamentary affairs minister Pramod Mahajan suggested that the NDA put up someone who is "born and brought up in the BJP" as its vice-presidential candidate, and Shekhawat's name was suggested, the home minister readily agreed. One reason could be that getting Shekhawat away from the BJP fits in with Advani's plan of inducting younger leaders into the party. Minister of state for small-scale industries Vasundhararaje Scindia is tipped to take over the state presidentship.

Despite Shekhawat's claim that he will now play an apolitical role, few in the BJP believe he would give up his old habits. In fact, his personal equations with the NDA allies and even the Opposition put him in a position to replace George Fernandes as a trouble-shooter for the prime minister. Most recall when Vajpayee was invited to Rashtrapati Bhavan after the 1999 elections to prove his majority, he wanted Shekhawat to accompany him. This is the level of trust between the two. And with Shekhawat taking up residence in Delhi, there is little doubt that he will be helping out his old friend, albeit unofficially. Moreover, at a time when the deputy PM is consolidating his position within the party, Shekhawat could emerge as a focal point for the disgruntled elements in the BJP who may not have access to the PM.

But for the record, Shekhawat says that he is not going to indulge in any party politics. "I am no longer linked with 11, Ashoka Road (the BJP headquarters). I am now the vice-president." However, his aides point out that just 24 hours after he was elected, Sonia Gandhi, the leader of Opposition, still had not called to congratulate him. But Shekhawat doesn't hold that against her as he steers away from active politics and occupies a constitutional position.