'A Man Of Few Words, But Full Of Action'

'Kapil took up challenges with the ball or the bat and stood ahead of the rest.' 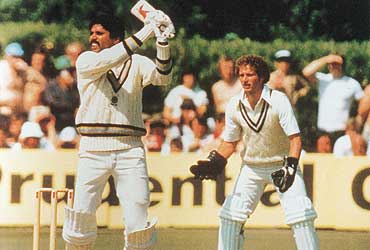 outlookindia.com
-0001-11-30T00:00:00+0553
Kapil deserves this honour. I have seen him grow, from a National Camp young pace bowler in 1974 to the day he played his first Test for India against Pakistan in 1979 and as captain of the Indian team which won the World Cup in 1983. His dedication to the game and his eagerness to face challenges has struck me most. The worst pitches and most trying times have brought out the best in me. This is true with Kapil who was a positive cricketer and took up challenges with the ball or the bat and stood ahead of the rest.

I kept wickets for Kapil from the time he played his debut Test against Pakistan and would like to say without hesitation that he was the best outswing bowler I have ever seen. He was an outstanding all-rounder and athletic on the field. Between Kapil and me, we have accounted for 53 batsmen in Tests. On the field, he was a man of few words but full of action. He used to say a few words only when we had to get a batsman out.

I do not want to make any comparison between men who have led the Indian team, but in Kapil we appreciated his positive approach. During the 1983 World Cup, we seniors gave him complete support, and as the majority of us were with him, the team spirit was evident. It is very important for the captain to have the confidence of his players and so we made sure that we all gave 100 per cent on the field.

There are a couple of things I remember about the World Cup. The match that Kapil won for us with his batting against Zimbabwe in Tunbridge Wells. I walked in when we were precariously placed (at one stage India was tottering at 17 with five batsmen back in the pavilion). I told him to play his natural game and that I will do my best at the other end. I judged the first two balls well and smashed the third ball to the point boundary. I gave him the confidence and watched his blitzkrieg. It was Kapil all the way! We added a record 126 runs for the ninth wicket, Kapil unbeaten on 175 and me not out on 24).

When we made it to the final, he told us at the team meeting that we had nothing much to lose and that everyone must make their best effort. So, we didn't panic and were helping one another. Of course, God was with us in the form of a good-luck cycle.

For youngsters, Kapil was always the greatest motivator. He would step on to the field first, even if it was a training session or nets or a match. He used to encourage youngsters a lot and with his leadership qualities he had turned into an ideal role model for them.

I spoke to Kapil when he was under a cloud following allegations of match-fixing. He was dejected and sounded extremely low. I told him that every one has to go through difficult phases in life and if you are honest, you will emerge on the top.

The Best Of The Rest