A Lukewarm Cup Of Tea

It was the best of China, but while the feast looked good, it wasn't really filling 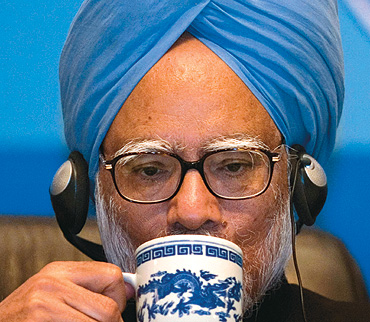 Standing in a huddle at one end of the vast, stately Great Hall of the People, we witnessed an austere yet impressive ceremonial welcome unfold with stately precision. As Chinese premier Wen Jiabao escorted Indian prime minister Manmohan Singh through a guard of honour on his first visit to China since taking office in 2004, we, the media pack, staring hard for signs of good chemistry, saw Wen place a guiding hand on his Indian counterpart's back as they walked down the red carpet. Later, we lapped up other details that travelled across the circuit—the Chinese premier's special gesture in hosting a small private dinner for the Indian PM, the convivial mood as they dined, the quoting of famous writers, the host's solicitousness in escorting his chief guest all the way to his car at the end of the dinner, in the biting cold. "I have never seen this happen before in China," gushed commerce minister Kamal Nath on the flight back home.

Indeed, there were many such moments—belying stereotypes about the stiff formality of the hosts—that injected colour into an encounter between the world's two most populous and fast-growing nations, conducted against grey skies in sub-zero temperatures. But even Indian officials agreed that personal equations are not critical when it comes to dealing with a country that has been a bureaucratic state for the last 3,000 years, and does its diplomacy through a deliberate, ritualised and highly structured negotiating process.

So, the question of who got on with whom has little bearing on what the Indian side took back from the process. What did it take back? With carefully weighed official statements indicating slight—or to use the word that was to become the buzzword of the visit, "incremental"—shifts in language rather than clear-cut advances, the trip is already open season for interpreters, especially on a hot question with important domestic implications: has China inclined its powerful head in the direction of the Indo-US nuclear deal (see box)? The main evidence, at least in cold print, for making such a claim, is the warmer language the two sides used on promoting cooperation in nuclear energy. In their previous joint declaration, during President Hu Jintao's '06 visit to India, they had merely "agreed" to do so. This time around, they were making a "pledge" to do so, consistent as before with their international commitments. So, not surprisingly, it came to be asked repeatedly on the trip whether China would support India when/if the Indo-US deal goes to the Nuclear Suppliers Group (NSG)?

Analysts Outlook spoke to during and after the trip were not inclined to read anything quite that strong into the declarations and official pronouncements that came out of the trip, especially after the PM's clarification on the flight back home that he had received no assurances on NSG support from Chinese leaders. A former Indian diplomat who has worked closely on China policy felt Beijing had successfully hedged its position. "The Indian side may find satisfaction in pointing out that China is not showing any signs of opposition on this issue, but it will be a case of being happy with shadows rather than substance." Another former official said: "China may not block India if the other members want to go ahead. However, there is no sense that China has any intention of putting its weight behind India on this issue. " Han Hua, a South Asia specialist at Peking University, and a member of the select audience at the PM's address to the Chinese Academy of Social Sciences, made a similar point. While seeing no "significant improvement" in 2008 on what had been said in 2006, she said, "this is at least a hint that China won't take the lead in blocking India (at the NSG)". Michael Yahuda, a US-based China expert and visiting scholar at the George Washington University, does detect a "slight softening of stance", which he attributes to abating Chinese fears about the US using India against them. His conclusion: "They would not want to be seen as the people putting a veto on the Indo-US nuclear deal."

Another issue that got attention is what kind of support China had shown for India's aspiration for a permanent seat in the Security Council. The inclusion of four words—"including the Security Council"—in the joint statement was played out by the Indian side as a—yes—incremental but significant development. But those looking at the fine print some distance away from the negotiating table read things differently. "I don't see any big change here," said Han. "There is no clear-cut policy of supporting India as a permanent member of the Security Council." Says Yahuda: "This statement is a formal acknowledgement that India is a global power. However, I think the Chinese are also betting on the fact that there won't be any Security Council reform anytime soon." Concurred an Indian diplomat, "This issue is 'quasi-dead'." 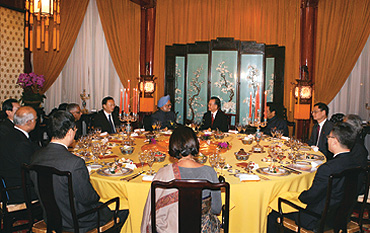 On the border dispute, the two sides had nothing new to say officially, expressing their lack of breakthrough by reiterating for the n-th time their intention to "seek a fair, reasonable and mutually acceptable solution" on the basis of the political parameters and guiding principles announced during Wen's 2005 visit to India. National security advisor M.K. Narayanan met executive vice-minister Bai Bingguo, both special representatives tasked to thrash out a framework on the boundary settlement. Their talks, which went through 11 rounds before the visit, have been limping; one of the challenges for the Indian side was to get momentum for these talks. On the return flight, the PM said "the two special representatives have already set up a working group which is looking at two alternative drafts which should ultimately emerge as an agreed framework".

That sounded like progress, but was it? Explaining what had transpired during the latest border discussions in Beijing, a top government source made three points: one, the Chinese draft retains China's claim over Tawang in Arunachal Pradesh, one of the major sticking points in the negotiations. Two, while the guiding principles say the interests of settled populations must be safeguarded, differences have emerged on the interpretation of this principle. India is clear there can be no transfer of settled populations, but the Chinese side seems to want to approach this issue by distinguishing between differing population densities.

Thirdly, China continues to be not too keen on exchanging maps aimed at clarifying the Line of Actual Control (LAC), which it views as a status quoist approach. India, on the other hand, wants to continue with this exercise, to control "incursions" or troop movements—by both armies, incidentally—because of the undefined nature of the LAC. (Only maps of the middle sector have been exchanged.) Does all of this sound like a roadmap for progress? Yes, said the source, because areas of least contention would be taken up first before moving on to more contentious issues, as in the case of the 123 agreement. "We succeeded there, we can succeed here," he says. But, analysts say, it is far from being the first time some of these problem areas have been aired. In fact, reading through past accounts of border discussions, you cannot but be struck by how the vocabulary, both of discord and forced optimism ("accelerating", "gaining momentum", etc) keeps repeating itself over the years.

On the other hand, what is often forgotten, as an official pointed out, is that shots haven't been fired on this vast border since 1975. It is quiet facts like that, rather than the millions of euphoric words generated by prime ministerial visits, that reveal the real gains of the stabilising and maturing Indo-China relationship. They have not just kept peace on the border, but despite a long history of mistrust and suspicion and continuing geostrategic rivalry, they have in recent years built up trade ties, undertaken cbms, attempted to build up military-to-military relations, even if symbolically, and reduced the long gaps that once existed between high-level meetings. As an analyst put it, the best thing about Prime Minister Manmohan Singh's visit to Beijing was that it happened.