A Lot More People In The Sky 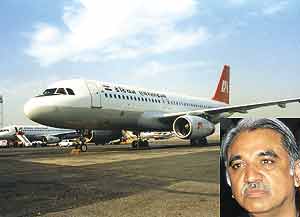 Indian Airlines, which has been waiting for 16 long years to get new planes, has some good news with the Public Investment Board clearing its proposal for the purchase of 43 aircrafts at a cost of around $2 billion. Sunil Arora, chairman and MD of Indian Airlines, told Outlook that finally it looks like the long-felt needs of the airline are going to be met. "All of us at IA are very excited, it’s a major step forward," he said.

The next step, of course, is getting it cleared by the Cabinet Committee on Economic Affairs. And industry watchers are optimistic that by the end of the current year, the proposal should be through given the pace with which the civil aviation ministry is working. Of the 43 Airbus aircrafts, 70 per cent will be used to replace older planes while 30 per cent would be additions to its fleet. The Indian Airlines fleet has a total of 65 aircraft as of today. The first new planes should be delivered by the summer of 2006.

With the civil aviation market opening up and Indian Airlines’ plans to expand operations, it was imperative that IA’s acquisition plan went on the fast-track. According to Arora, competition is not an area of concern to IA. He explains that as long as the marketshare of an airline does not go below its capacity share, there is nothing to worry and IA, he added, has no such problem on any sector. He agrees, though, that it was getting difficult to dress up an older fleet which is where the acquisition of new aircraft would help.

The investment board clearance for IA’s project also brings hope to Air-India whose board is scheduled to meet by November-end to finalise its own aircraft acquisition plan. Air-India plans to launch its low-cost airline called Air India Express by the end of March 2005.