Shourie erred on the divestment route. We 'sold the family silver to pay the butler'. 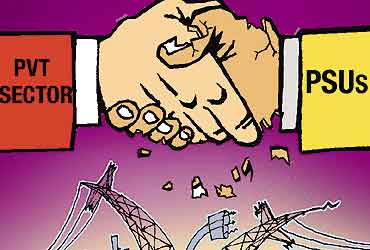 On May 17, 2004, the stockmarket went into a tailspin. The one alleged reason for the panic was that the Left parties, supporting the Congress government from the outside, had suggested that the high-profile but controversial disinvestment ministry be scrapped. Needless to say, Prime Minister Manmohan Singh hasn't appointed a disinvestment minister—at least not till the time of going to press.

But why has disinvestment got such a bad name? Well, if there's one individual who has given privatisation in India a negative connotation, it's Arun Shourie. As the PM pointed out, by pursuing privatisation as an ideological commitment and not as a means of economic reform, Shourie alienated most politicians, not to mention ordinary working people. While mindlessly reposing faith in private enterprise as a panacea for all ills of industry, what has been delayed is the administration of much-needed medicine to revive many of the country's ailing PSUs.

Using certain yardsticks, efficiency levels are undoubtedly far higher in private firms than in PSUs. It is also nobody's case that state-owned firms should be baking bread, making bicycles or running hotels. Nor is one suggesting that the working of PSUs should not (or cannot) be improved. What has happened is that some of the best-managed, most-profitable PSUs have been sold for a song, the proceeds used to pay the salaries of our netas and babus and public monopolies replaced by family-dominated ones. This is why privatisation has become such a dirty word outside the chambers of commerce and the cloistered, cool cubicles of correspondents and editors of pink dailies.

Privatisation is meant to reduce the burden on the exchequer. Reality check: in the '90s, the profits of 130 profit-making PSUs went up 4.6 times, the losses of 106 loss-making PSUs increased 3.4 times and the total net profit of all 236...