A Loose Argument Of Statues With Big Egos

Hemmed in by the neo-federalist ambitions of state satraps and Modi’s hocus pocus, will the Idea of India implode? 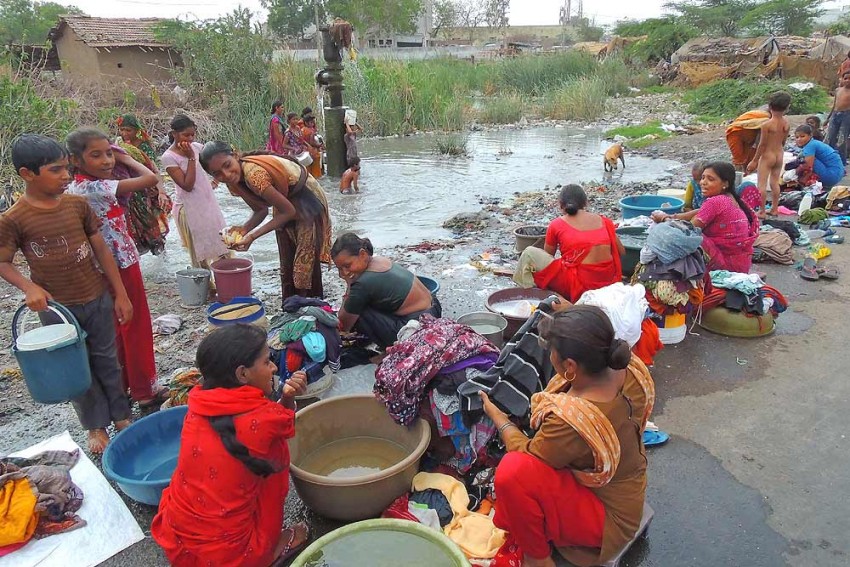 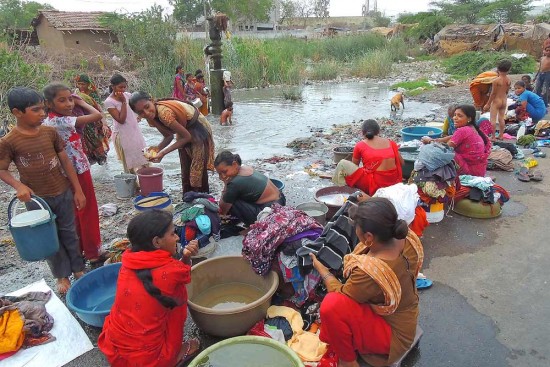 It so happened that I was in Ahmedabad and met with a foreign correspondent who had come to cover the impact of Narendra Modi’s leadership on vibrant Gujarat. He had visited rural areas and had been to the Kutch region. After exchanging notes, as journalists do, he asked me if I knew a doctor who was an “eye and ear specialist”. Puzzled by the question, I asked him whether he meant an ear, nose and throat (ENT) specialist, as he appeared to be tormented by cold and cough. He said, no, he was looking for an eye and ear specialist. I said I don’t think there is such a specialist anywhere. But why this odd search at all?

He paused a little and with a snigger on his face said, “Well, I have been hearing a lot about the great development that has taken place in Gujarat, but I can hardly see any impact in the rural areas of the state. So it’s obvious that my eyes can’t see what I hear so loudly. Then it must be a str­a­nge ailment of eye and ear dis­equili­brium. Or else I would have both seen and heard the vibrations that this great man Modi has brought to his state.”

But then I realised that I too had suffered from this ailment in Modi’s Guja­rat. That set me thinking about the possible parliamentary chaos that we are going to experience next month. Modi and the BJP claim that now he is a well-established national leader, of the stature of Vallabh­bhai Patel. (Not Nehru please, beca­use Nehru was a pseudo-leader who had usurped the sta­t­ure which legitimately belonged to Patel). The foreign correspondent had visited the site for the Patel statue. He wondered how the huge cost of erecting the monument would develop the state or improve the quality of life of the people. But then, it was necessary for the Gujarati ego, masquerading as proud Gujarati identity.

This politics of identity-mongering has now gone too far and can actually endanger the delicate fabric of national unity, integrity and sovereignty. Jayalalitha, who is almost equally egocentric and autocratic, could erect a huge mon­ument for Annadurai, to celebrate Tamil identity. it could be raised at the opposite end of the Vivekananda Rock memorial at Kanyakumari, and could be larger than Patel. That would be justified too, because Gujarat has only 26 Lok Sabha seats, Tamil Nadu has 39. If Jayalalitha sweeps the poll and wins all 39, or even 30 seats, that would be 4-13 more seats than Modi, even if he wins all 26 in his state.

“It’s obvious that my eyes can’t see what I hear so loudly. How could I miss the vibrations this great Modi has brought?”

Mamata Banerjee, with her rustic charisma, could also win a minimum 30, if not more out of the 42 seats in the state which too will be more than Modi’s 26-seat landslide. She too can announce the project of erecting a towering statue of Sub­hash Chandra Bose, again larger than Patel. Who in Ben­gal can oppose the idea? Not even the Communists who had denounced him in the 1940s as a fascist. Bengali identitarianism has its roots in the so-called renaissance and everybody from Raja Rammohan Roy to Amartya Sen via Jagdishchandra Bose and Satyajit Ray are Bengali icons. But none of them can qualify for a giant statue and the frenzy associated with it. Indeed, Modi may even broach  the idea of a Bose statue to build the alliance with “Didi”. It will also help his and the BJP’s hyper-nationalist agenda.

Similarly, either Jagan Reddy or Chandrababu Naidu can fan the fires of the injured Telugu people to convert them into Telugu Rashtram, with someone ready to sacrifice his life in yet another fast unto death, a sort of sequel to the Potti Sriramalu martyrdom which led to the formation of Andhra Pradesh. Now it can be Andhra Rashtra. They can have a vastly larger-than-life memorial of either Akkineni Nageshwara Rao or N.T. Rama Rao, the rebel rabble-rouser who gave the Telugu identity that lustre and paved the way for the present Babushka-like leaders from the state.

The list is endless. Mayawati has already set a record of sorts of her statues and her brand of Dalit identity spanning all of Uttar Pradesh. Naveen Patnaik can evoke the memories of the legendary Biju Patnaik to further the Orissa identity cause. From Punjab to Gorkhaland, from Mizoram to J&K, everyone has identities and related grievances. And they may translate these grievances by seeking “financial packages”. But what they are actually seeking is greater and greater autonomy. 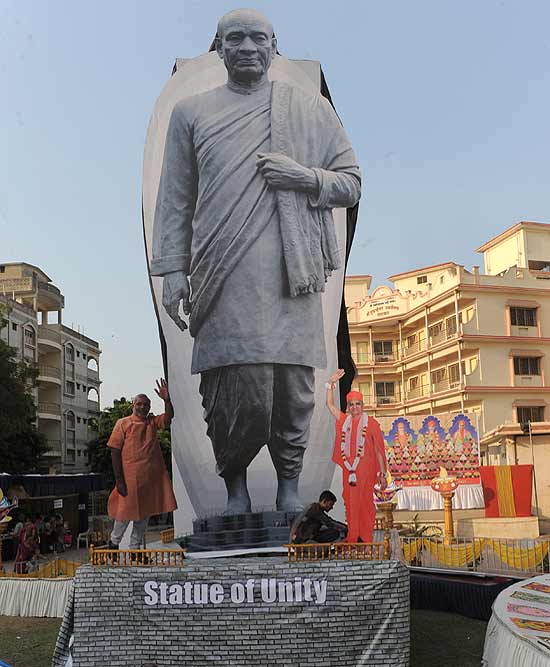 Cutout of the coming Patel statue, Ahmedabad. (Photograph by AFP, From Outlook 07 April 2014)

If in each state, some or other regional party or combination wins far more seats than the Congress and in the name of neo-federalism, the BJP supports a greater role for the Chouhans, Raman Singhs and Vasundhararajes of this world, then even Modi will be reduced to the status of leader of Gujarat, more satrap than the pan-India figure he wants to be. Indeed, any journalist or opinion pollster who has travelled across the country will have noticed that despite the impressive all-India ratings, Modi fails to score in the south, in the east, and in the Northeast. His claimed descent on the north, in Bihar and Uttar Pradesh, is like a walk on water. The volatility and the internecine caste conflicts in these states may appear to have vanished, but politics of opinion polls cannot wish away the sociological reality—for that is determined not by ‘Modi mania’ but by production relations and the caste-community matrix. Even if the opinion polls are proved right and the BJP wins 40-plus seats in UP and 20-plus in Bihar, socioeconomic explosions will ensue. They cannot be “managed” by the development mantra or by the so-called Modi magic.

The rise of the regional parties and community satraps are not always a reflection of the local bourgeoisie (as against the domination of the national bourgeoisie). The oft-quoted crony capitalism grows more in the states/regions than at the pan-India level. This is because the cronies can “manage” the state politicians and governments more easily. The local mafia too is a product of the state-level crony capitalism. At the state level, the mafia and the police can work in perfect tandem. In the so-called neo-federalism, this is what will happen. In fact, it has started happening alr­e­ady and that is why this explosive rise of the state parties, parading the­ms­elves as the Federal Front. It is a parody of Marxism that the Left has begun to endorse the Federal Front in the name of anti-Congressism. This project of anti-Congressism of Ram Manohar Lohia in the 1960s is made to look like some advanced political philosophy, while actually it is a cover for lumpenisation grown at the state level.

The Federal Front (or whatever it morphs into, without changing the content of their politics) is essentially against the Idea of India. While the idea of India celebrates unity in div­e­r­sity, this federalism leads to disunity by overemphasising diversity. The argument that “state leadership” must be allowed to flourish is in reality a euphemism for allowing local warlords to spread their tentacles, which in turn can threaten our very national identity and unity.

The Federal Front is essentially against the Idea of India. This federalism leads to disunity by overemphasising diversity.

Soviet reformer Mikhail Gorbachev, in his enthusiasm for reforms­—famously perestroika (restructuring) and glasnost (democratisation)—decided to give more autonomy to the Soviet states. It was only later that he realised (and regretted) that the states within the Union of Soviet Socialist Republic (USSR) wanted not autonomy but their own nation-state. Within three years, the Soviet Union began to dismantle, and with the rise of demagogue Boris Yeltsin,  the structure went completely out of control. The anarchy went so far that in 1993, within two years after the dissolution of the Soviet Union, their very Parliament had to be bombed by Russian tanks to get the MPs to come out and surrender. They were protesting inside parliament. In all the 15 republics which declared freedom, there were civil wars within, with coups, violence and total disruption. The rebellion in Chechnya has led to a virtual war with Russian bombers carpet-bombing their own people. Today’s Ukrainian crisis is just a continuation of that meltdown.

The Soviet Union was a multi-cultu­ral, multi-religious, multi-racial, multi- lingual country. The moment all those identities acquired chauvinist and agg­­ressive agendas, violence was inevitable. The question here is not whether the Soviet state was good or bad, the issue we are discussing is the moment one starts granting sovereign status to all identities, all hell breaks loose.

Then it’s not just Hindus versus Muslims, then it is one caste against another, one language vs another, one class against another and then a free for all. Neither police, nor military, nor any “decisive leader” can bring the chaos under control. Because it can even be police vs military. The naive military and police brass which is joining the BJP with the hope of bringing “governance” to the country will soon realise that governance is not a law and order subject. It is not by strong diktats and decisive leadership but by politics that one can overcome antagonistic contradictions in society.

One can’t end corruption just with anti-corruption legislation or Lokpals or still stronger Jan Lokpals. Pol­i­tics is a complex process, in which communication and acc­ommodation, different opinions and perspectives, con­flicting vested interests and personal ambitions, caste ide­n­ti­ties and individual egos, ideologies and ideals, people’s asp­irations and hopes, rational or irrational have to be dealt with.

Politics is also sociology and psychology, not just ideology. But without the ideology of social good and inclusiveness, without some altruism and ideals, the invisible and abstract system will not work. Naked pragmatism or brazen governance will fail miserably. That is why the fascistic style of governance will fail just as the so-called authoritarian Communist model proves to be a disaster. Nazi Germany ruined itself, devastated its people and the Fuhrer shot himself. The Soviet Union disintegrated and the ideology and ideals of socialism got condemned.

It was Nehruvianism which kept the Idea of India together. In the name of reckless anti-Congressism, we are destroying the republic, built with effort and ideology by Pandit Nehru, Dr Ambedkar, Vallabhbhai Patel et al, who were all inspired by Gandhian ideals and secular, republican ideas which facilitated the backward castes coming into the mainstream and multi-cultural identities coexisting.

This election will decide whether we will destroy ourselves, the German way or the Soviet way. But there is an alternative, that of Gandhiji in conjunction with Nehru and Ambedkar—a legacy which is under threat.

Off The Scales, Just Move It!