Hit by frauds and rising rates of interest, the booming home loans market has now started to slow down. 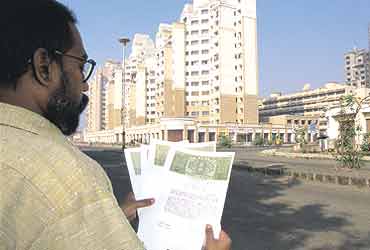 outlookindia.com
-0001-11-30T00:00:00+0553
There was a party happening at every home. That may be an exaggeration, but four years of dramatic fall in interest rates had resulted in a mega boom in the home loan segment. And banks were falling over each other in a bid to offer the best (read the lowest) rate to consumers. Imagine, there was a loan available at an unimaginable 7 per cent per annum! You just had to walk in with an application, and walk out with a loan within hours. Suddenly, the fun is being disrupted by a risk-averse party-pooper—the Reserve Bank of India (RBI).

Last week, almost all the biggies, including ICICI and HDFC, announced that the home loan rates will be hiked after Diwali. (SBI increased the rate in September itself.) Says Prashant Joshi, head of retail, IDBI Bank: "It's only a matter of time before rates rise." It was RBI's mid-term credit policy this October that gave a concrete signal that a hike was imminent. One can say that RBI's move was driven by macro factors such as high domestic inflation and the ever-rising US interest rates.

But what has gone unnoticed is that the central bank was also prompted by concerns about ever-rising frauds. Recently, RBI governor Y.V. Reddy said, "The fast-growing housing and consumer credit sectors also represent some degree of higher penetration, but the quality of lending needs to be ensured." Way back in December 2003, RBI's deputy governor Vepa Kamesam had cautioned banks against reckless lending in the home loan segment. "Grow fast but don't cut corners," he said at the bank economists' conference in Mumbai. According to RBI sources, bankers have expressed doubts that they were not sure about the authenticity of the documents they were lending against.

These anxieties were summed up in an RBI notification (Sept 1, 2004) sent to the CEOs of all urban cooperative banks, but was seen by many as a warning to the entire banking sector. The circular, based on the internal report of its "committee on frauds in housing finance", detailed nine widely-prevalent frauds, of which two were listed as "high" incidence and another five as "medium". Among the former were instances where the title and other documents are forged using hi-tech colour xeroxing machines, which are used to get multiple financing from different banks for the same property.

In fact, the increase in property scams has forced red lights to begin flashing in the offices of several banks. Earlier this year, the credit rating agency Crisil estimated that the non-performing assets (NPAs) in the housing loan portfolio of some financiers, including banks, was a high 3.3 per cent. One can argue that this figure is quite low, as compared to the average net NPA of 4-5 per cent for the combined portfolios of all banks. However, banks have considered home loans to be the safest form of lending money as the borrowers invariably paid up on time, and the defaults were below one per cent. An indicator of this mindset is that a few banks offered loans that were more than the value of the mortgaged property as they believed that housing was the safest segment to lend to.

Experts now fear that the new NPA levels—thrice the expected figure—can cause the home loan bubble to burst in a segment where annual disbursements have crossed Rs 50,000 crore. In such a context, the RBI's initiative to effect an increase in interest rates may slow down the business and help banks look at home loans in a more careful manner. This trend will be aided by the central bank's hike in the risk-weightage attached to the home loans portfolio of banks (and not the finance firms) from 50 to 75 per cent. (The new figure is lower than the 100 per cent that was applicable prior to the current boom.)

For, there's a consensus that the prime reason for frauds was stiff competition, which intensified a few years ago when PSU banks made a foray into the business. With the RBI then reducing the risk-weightage on housing loans, it gave banks the leverage to loan funds at lower than their normal rates. The lower demand for corporate credit also forced banks to look at new, emerging retail options (of which home loans is by far the largest).

In their overzealous bid to grow aggressively in the new segment, banks seemed to have thrown caution to the wind. "We are constantly slapped with stiff targets. To meet them, we have no option but to go slow on our internal requirements," says a candid Delhi-based manager, who works for a bank that has probably the biggest presence in the retail sector. Some of the frauds mentioned in the RBI's committee report point to laxity among bank officials.

For example, one modus operandi, resulting from a collusion between the builder and the customer, is when an initial loan amount is disbursed based on a booking with a builder. But after availing the loan, the borrower cancels his booking, and takes the refund directly from the builder. However, the bank officials don't insist that the registration receipt issued by the registrar of stamps office bear a hypothecation clause that can prevent such misuse. Another case of fraud occurs when builders take construction loans from banks. But they (or their agents) sell developed properties or undeveloped ones without repaying the original loan. This practice too, according to the RBI, can be curbed only if the banks verify this aspect while clearing the builders' projects.

From one's personal experience, it's clear that there's collusion between builders (or agents) and bank officials at the branch level. In many cases, builders cajole the latter to overlook cases of incomplete documents such as lack of salary slips or income tax returns. Ironically, many banks have been duped through fabrication of such documents. Another thing that happens routinely—and is listed by the RBI's committee as a fraud of "medium" incidence—is that the agents collect the loan cheques from banks and encash the money by depositing them in fictitious accounts, instead of giving it to the builders.

To top it all, in some cases, banks simply don't have the expertise to stop the existing malpractices. For instance, the borrowers have been able to get higher loans by inflating the value of their properties in connivance with the builders and/or the official valuers. This can be done by including various expenses and additional amenities, fixtures, legal charges, society advances and maintenance charges "which are non-existing". Only if the banks develop some form of inhouse expertise to value properties—which is nearly non-existent—can they hope to curb this.

For bankers though, the housing finance business seems lucrative despite growing evidence to the contrary. Says IDBI's Joshi: "As compared to corporate lending where NPA levels are higher, housing loans still provide a good opportunity for banks." Adds Conrad D'Souza, general manager, HDFC: "As a system, the RBI wants to be more careful." What he implies is that the central bank, which has been criticised for systemic failures and its inability to react in time in past scams, is just trying to make sure that it doesn't get the flak in case the going gets tough in the near future.

But with RBI on its toes, and interest rate hikes on the anvil, the housing loan market may witness a slowdown; at least the aggressive growth may not happen. Of course, the impact can be worse if banks are forced to raise rates further to provide for higher defaults that may result due to rising frauds and new norms. Beginning this year, banks have to report any advance as non-performing within 90 days as against 180 days earlier. Which means that if a borrower misses a couple of instalments, the loan turns into an NPA.The combination can deflate the property balloon in no time.