A Long Way From Serendip

The President's absence only roils an already tumultuous political scene 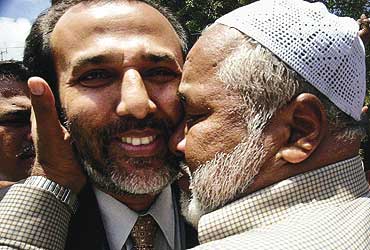 outlookindia.com
-0001-11-30T00:00:00+0553
Phonelines in Colombo began buzzing early on Wednesday, June 27, with the news that President Chandrika Kumaratunga had fled the country. Triggering the speculation was her decision to appoint Prime Minister Ratnasiri Wickremanayaka as acting president before winging her way to England on a private visit. Says Victor Ivan, editor of the Sinhala weekly newspaper Ravaya, "This is the first time since the 1978 Constitution was brought in that the PM has been made acting president. It is a clear indication of her nervousness."

President Kumaratunga has reasons to be nervous. She lost her parliamentary majority last week when the seven members of the Sri Lanka Muslim Congress (slmc) left her People's Alliance government. Relations between slmc leader Rauf Hakeem and Kumaratunga, already strained, worsened a month ago when the slmc opposed some of the proposed legislations of the government; in retaliation, Hakeem's cabinet colleagues accused him of demanding undue advantages for Muslims.

Fearing Hakeem would strike a deal with the opposition United National Party (unp), Kumaratunga decided to back Fariel Ashraff, widow of the slmc's founder, in her tussle with Hakeem. "The President was rocking the cradle and pinching the baby at the same time. The last straw was when she began to engineer the party's division," declared Hakeem after he was sacked from the cabinet on June 19.

"The President thought that by sacking Hakeem, Ashraff would get the support of most of the 11 Muslim members. But all seven slmc members stood by Hakeem. Ashraff has only four members from our sister party, the National Unity Alliance," says A.H.M. Muzzamil of the slmc.

Soon after the slmc crossed over, the unp handed over the long-awaited no-confidence motion against the government. It is expected to be debated in Parliament in mid-July. "The slmc crossover was opportune. The unp can topple the government only now. After mid-October, they don't have a chance," says Lesantha Wickremetunga, editor of the Sunday Leader paper. This is because Parliament would be a year in existence in October and the President consequently can dissolve it.

The balance of power in Parliament is tight. The ruling seven-party coalition has 109 seats, the Janatha Vimukhti Perumana (jvp) 10 seats and the Opposition combine 104 in the 225-seat assembly. "We are confident of winning the no-confidence motion. Ten ruling party members are already willing to join us; the number is growing daily," says Gamini Athukorala, unp deputy leader.

Even before the no-confidence motion was handed over, senior ministers had begun to call for a national government, sparking speculation that several ruling party parliamentarians were holding talks with the unp to form a broadbased government to usher in democratic reforms. Agrees unp parliamentarian Rajitha Senaratna, "The attempt is to form a broadbased government on a single agenda—to establish democratic reforms that everybody wants."

The jvp, with a crucial—if not decisive—10 seats, is playing its cards close to the chest. Its general secretary Tilwin Silva, however, says, "The question of toppling the government does not arise if it is willing to support democratic reforms."

Central to the democratic reforms are five independent commissions to manage elections, the judiciary, the administrative service, the police and the state media. Political parties both in the opposition and in government threw their support behind the reforms, proposed and popularised by civil society groups, after a series of elections were marred by violence and rigging. Kumaratunga has endorsed the first three commissions but is reluctant to relinquish control over the police and the media.

"The battle is not over. The President has great power under the Constitution. She can ignore Parliament and run the country for a while if she wants to," says constitutional expert Rohan Edrisingha. If the no-confidence motion goes through, though, the prime minister will be from the Opposition. In that scenario, her writ will not run. And there is the further threat that the government could then seek her impeachment. Reason enough, some say, for her to prorogue Parliament and drag the no-confidence motion until mid-October.

The Lady Has Arrived