A Long Journey To Be Herself

Ayaan Hirsi Ali exposes a whole universe of cruel reality she broke out of, courageously and logically 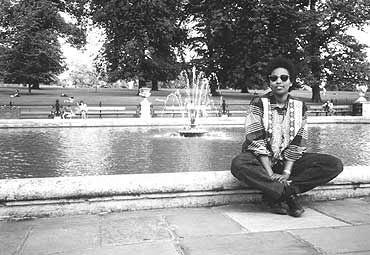 Infidel
By Ayaan Hirsi Ali
Simon & Schuster Pages: 350; Rs: 650
I couldn’t put down Ayaan Hirsi Ali’s Infidel. I’m already familiar with her ideas and intentions, having read her earlier work, The Caged Virgin, but this was magic: a whole universe of cruel reality opened up before me.

I travelled with her through the book to Somalia, Ethiopia, Kenya, Saudi Arabia, Germany and the Netherlands, and saw—awed and speechless—the miracles that happened along the way in Ayaan’s life. She was a poor refugee— her father abandoned the family, her mother was forced to beg or work as a maid. Ayaan was a youngster who was brought up almost illiterate, surrounded by social discards, poverty, dirt, filth, shit, cursing, shouting, beating, violence, dogma, bigotry, superstition, hopelessness, and total ugliness. And yet in a few years Ayaan had earned a master’s degree from one of the world’s best-known universities, had studied a subject like political science, and had become a member of parliament of the Netherlands, helping its government make difficult decisions. All that had seemed impossible she had now made possible.

Especially inspiring for me was to see the emergence of such a determined woman from a Muslim society where women are subservient and submissive. Ayaan describes in detail her journey from faith to freedom, from darkness to enlightenment. What she wanted to do, she did. Nothing could stop her: not even having to lie about her name and age in order to get political asylum in the Netherlands.

Lying is common among asylum-seekers. And for someone in her circumstances, lying is part of survival. In one chapter, for instance, she writes: "My mother was heroic. She managed to get another false passport." In a country like Somalia, where clan conflict was an everyday issue, where chaos and crime loomed large, escaping death by lying may well be heroic. Which is why one gets the impression that Ayaan, even as she apologises for having lied, is unrepentant. In the last few chapters of the book, she defends her actions. But to all other questions frequently asked of her, Ayaan’s answers are wholly honest.

When her "heroic" lie was uncovered, Ayaan was thrown out of the Dutch parliament and her citizenship withdrawn. She decided to leave the country. She is now in the US, happy that "the pressure cooker of Holland is over". Controversy continues to dog her: her critics wonder why she has a fellowship at the conservative American Enterprise Institute, and whether this is evidence that she is being used by the extreme right-wing anti-Islamic groups, Jews and Christian fundamentalists.

But who is using whom? Has she been captured by the right wing or is she using the right-wing neo-conservatives for her own interests? What seems clear is that Ayaan is an intelligent and very ambitious person and knows exactly what she is doing. For a woman who knows how to tell her stories, Ayaan is certainly much better off living in the United States, where she will find a large readership. She has seen the powerless situation of her mother and other women in countries like her own, and has no intention of going down that road. By coming to the Netherlands and diligently working to become an MP, she became a hero. And now, by leaving the Netherlands after exposing the meanness, racism, jealousy or cowardice of her fellow MPs, Ayaan has become a hero once more.

While Ayaan comments about the terrorist attack on America, she makes no mention about the US’s invasion on Iraq and the brutal atrocities unleashed on innocent people. Was that intentional? She is certainly fascinated by Western culture, but does that mean she should not criticise what she finds wrong or that she must support state terrorism to oppose religious terrorism? Both are obviously against humanity, so where did her humanistic feelings go?

Yet, I admire her as a woman who has courageously and logically broken the misogynic traditions, culture and customs of her society. Ayaan was born and brought up in a society where, "if a girl’s virginity is despoiled, she not only obliterates her own honour, she also damages the honour of her father, uncles, brothers and male cousins. There is nothing worse than to be the agent of such catastrophe. To be raped would be far worse than dying, because it would tarnish the honour of everyone in their family".

In such a society it was believed that if a girl’s clitoris is not excised, "one day it would grow so long that it would swing sideways between her legs". So Ayaan’s clitoris was cut the way a butcher would snip the fat off a piece of meat. Her sexuality belonged to the master of her family—her father or her uncles. The place between her legs was sewn to prevent damaging the honour of her father and her whole clan. One does wonder, though, why a fighter like Ayaan has so much sympathy for a father who abandoned his family and looked out only for himself. Is it merely filial respect or a secret desire for the sense of power he represents?

Ayaan was a pious woman for far too long. She was involved with the fundamentalist Muslim organisation called Muslim Brotherhood, and she wore the burqa, Islamic head-to-toe gown. She prayed five times a day. She was treated as an unequal, learning that "men do not pray alongside women". They pray behind men, "because though they cover themselves for prayer, that cloth could shift and uncover a piece of clothing, or skin, which could distract the men and lead them into sin."

She was brought up in a society where women were considered filthy because they menstruate. When they menstruated they were not allowed even to pray or to touch the Quran. Girls felt guilty for bleeding every month; they were told it was proof that women were less worthy than men. Ayaan learned that a Muslim girl must not feel free, she does not make her own decisions or seek control; she must remain docile. If you are a Muslim girl, you disappear until there is almost no you inside you.

In Islam, becoming an individual is not a necessary development. Many women never develop a clear individual will. They are taught that females should obey their husbands, that females are worth half of what a man is. And infidels who do not believe this? Clearly, infidels should be killed. There should be no talk about sexuality. The subject is shameful and dirty. God forbids good women from feeling desire.

When young, Ayaan learned that "women were in the grip of invisible forces that played with their minds and made them switch from one extreme mood to another. That was why Allah had ordained that the testimony of two women is equal to that of one man, and why women should not be allowed to govern or accept public offices, for leadership requires mindful contemplation and judgements reached after careful thought. Women lacked all this by their very nature". Women were flighty and irrational, so it was the responsibility of their fathers and other male guardians to decide who they should spend the rest of their lives with. This she learned, so that she grew up believing "because I was born a woman, I could never become an adult. I would always be a minor, my decisions made for me. I might have a decent life, but I would be dependent—always—on someone treating me well." She longed to change. "I wanted to become a person, an individual, with a life of my own". But despite her views, she continued using her Islamic veil, a sign of oppression.

After Ayaan became an atheist and criticised Islam, she started getting threats from the Islamists. But she was still a confused atheist. One day, for instance, when she heard news of the murder of an anti-immigration politician, Pim Fortuyn, she found herself thinking, "Oh, Allah, please let it not be a Muslim who did this!" An atheist praying to Allah?

But Infidel is more of a woman’s success story than a believer-to-non-believer story. Ayaan is a symbol of courage, not only for all Muslim women but also for women everywhere, whatever their religion and culture. She has made her place in a man’s world—she is everywhere, but came from nowhere. Her story is shocking and surprising, but she deserves our sympathy and solidarity.

That one pious woman became an atheist is not that moving to me. What is moving is that a vulnerable, dependent, fragile, beaten and threatened woman has become one of the most influential persons in the world. Any woman’s life is far more complex than most imagine, and if the West’s weakness is in settling for simple answers, Ayaan knows how to exploit this.