A Long Handle On The Broom

It was Nehru’s idea, to combat the indignity of bending 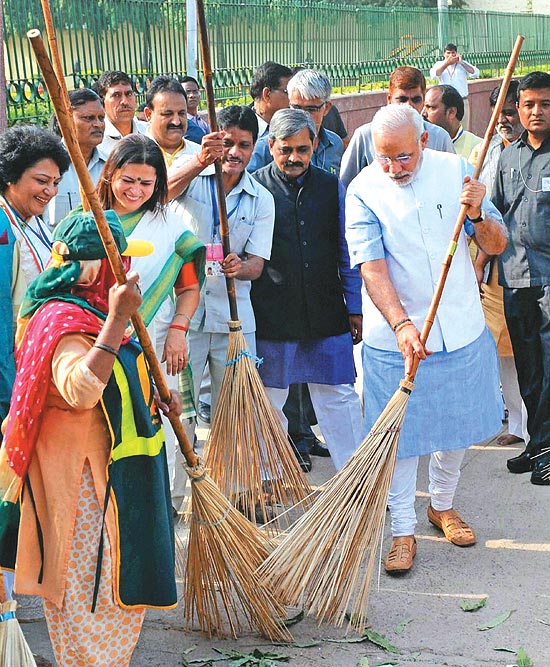 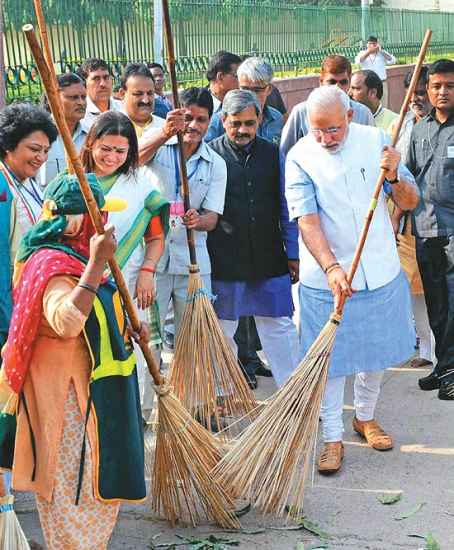 In a letter to chief ministers on June 12, 1960, Nehru wrote, “I am writing to you about brooms, the humble broom used by our cleaners and sweepers as well as in our houses. The normal Indian broom can only be used if one bends down to it or sits when using it.... A broom or a brush with a long handle, which can be used while a person is standing, is far more effective from the point of view of work and far less tiring to the person using it. So far as I know, all over the world these standing brooms or brushes are used. Why then do we carry on with a primitive, out-of-date method which is inefficient and psychologically all wrong? Bending down in this way is physically more tiring and, I suppose, encourages a certain subservience in mind.” Soon after this letter, corporations and municipalities were asked to give their cleaners and sweepers a long-handled broom. It quickly became standard practice, making life much easier for the nation’s municipal workers.

I am not narrating this story to score a debating point over his detractors (though that would be useful if it restored the declining vitality of our public debates) but to use it to introduce my argument about the man. In this simple story, at least three messages can be found. First, he was concerned about efficiencies to be achieved in the performance of public duties. Since this job had to be done by municipalities every day, the small innovation would ensure that it could be done with greater ease. In addition to efficiency objectives, he was also keen to adopt best global practices to improving the lives of the last man. The long-handled broom would make the job of sweeping the city “far less tiring to the person using it”. Bring efficiencies but also bring a human approach. And finally he was sensitive to the issue of dignity as he sought to convert a menial job into a functional one. By doing away with bending, he was challenging a practice that was so prevalent in caste and feudal India and that continues to be the basis by which social power is expressed against marginal communities. For Nehru, bending encouraged a certain “subservience of mind” and was “psychologically all wrong”. His couching it in these words reflects Nehru’s delicate moral sensiti­vity. The prime minis­ter’s being vocal about the problem of indignity, his attacking it through small technical innovations is the reason why many of the senior bureaucrats serving in his government referred to him reverentially as ‘Panditji’. Ask Governor N.N. Vohra.

But this is just one episode. There are many, many other incidents, some major, others minor, where we get repeat confirmation of these qualities just mentioned: a humanist disposition, an observant mind, an effici­ent administrator, and a collegial political leader. His selected works which contain his letters to CMs and others, his parliamentary speeches and presidential addresses, his press conferences etc reveal, to a discerning reader, a man and a mind engaged continuously with the making of a proud, democratic, inclusive and fair India.

To elaborate on this claim, let me narrate another incident. In a letter to D.P. Karmarkar, minister of health, on August 30, 1959, he wrote, “I am told that you made some statements in Parliament to the effect that Vanaspati was said by some experts to be harmful and possibly one of the causes of heart trouble if taken in large quantities. If that is supposed to be the medical view, then the question arises as to how we should deal with it.”

And another illustration. In a letter to K. Kamaraj, chief minister of Madras, on March 21, 1959, he expressed his annoyance at the security arrangements being made for him. “The other day I was in Bombay and I was quite shocked to see how the whole city’s life was upset by my visit. Traffic was held up for long periods and many police were deployed for this purpose. Far too many police and other cars accompanied me. I was so annoyed with all this that I said I would abandon all my programmes the next day if this occurred again.” The arrangements were reduced the next day, as a result of which fewer people were inconvenienced. Here again, we see a PM thinking first about the discomfort of the ordinary citizen. While this episode tells us something about Nehru, it also sheds light on the sociology of bureaucracy, which, fearing the power of the politician, goes into overdrive trying to please their masters, second-guessing their desires. This attitude is only growing, a culture of fear and sycophancy. It has become a pathology today—so much so that everyone in power has been given such privileges. The Supreme Court had to step in and restrict the use of red beacons. A small step for the court was a giant leap for equality.

If no issue was too small for Nehru, as the above examples show, no issue was also too big for him, whether of a philosophical or technical nature. In his speech in the Lok Sabha on August 19, 1959, justifying President’s rule in Kerala, he deviated from the legal issues and dilated on the philosophy of satyagraha. “...Surely, this House will remember that in the old days, when satyagraha and all these direct action movements were pretty common, how Gandhiji stopped the whole movement, because he thought it was going wrong; he stopped it. He even said that he was the one and only man in India who could perform satyagraha, nobody else.... If what I have said is satyagraha, then there was no satyagraha in Kerala, none at all, because I have seldom seen any place so thick with hatred and incipient violence, it was a case of thick walls of hatred and incipient violence, group hatred.... If there is so much hatred and so much bitterness about it, then it is dangerous to conduct any satyagraha, you may call it by any other name; it is not satyagraha.” In many ways it seems he was speaking to us today when he said that if we want to invoke Gandhi then “incipient violence and group hatred” as a subtext are impermissible. Gandhiji, he belie­ved, would have stopped it. And we know what that “it” is. Gandhiji cannot be invoked lightly. Nehru thought deeply about foundational issues. Professor Bhagwan Josh has detailed how he deliberately chose the dharmachakra of Ashoka as our most valued national symbol to signal our commitment to peace and non-violence.

These cultural, philosophical and political concerns were accompanied by his deep engagement with science and technology. We know his big achievements in building the IITs, the CSIR labs, the TIFR and what’s now called BARC, but it may be worthwhile to offer a counter-int­uitive story on big dams. While inaugurating the 29th annual meeting of the Central Board of Irrigation and Power on November 17, 1958, Nehru spoke about the “disease of gig­an­tism”. He believed that “ten thousand small schemes counted far more than a few big projects”. He was concerned about “water-logging, non-utilisation of created resources and full use of human power available in the country”. For him, the costs of a big project should be “evaluated in relation to the ‘upsets’ caused....” He had in mind upsets like removal of large number of people from sites and their rehabilitation. This wouldn’t be the case with small schemes. Where did these ideas come from? How would sociologists of science interpret them?

Nehru thought deeply about foundational issues. Not for nothing did he choose Ashoka’s dharmachakra as national icon.

These stories are not some random selections in defence of a man who is getting a bad press these days. They are, in fact, an invitation to intellectually discover him, read his selected works and encounter a political leader who had to build a modern state in a historical period of great uncertainty. Reading Nehru, one gets a picture of a man of ideas who believed in the Enlightenment promise, that an investment in science and rationality by the state would banish superstitions and myths (not mythology) that had been the bane of our society and that held the poor in bondage. The Mangalyaan mission was possible not just because of the science institutions that Nehru encouraged but also because of the large pool of scientists that these institutions have produced and who are the direct outcome of his commitment to developing a scientific temper. It is ironic that many who are at the forefront of the campaign to diminish his stature are products of these institutions and that many scientists have chosen not to acknowledge his contribution to the space programme. Perhaps his scientific temper movement did not go far enough!

Lest Nehru be seen as a scientific positivist, as one who did not understand our Indian philosophies (being a product of western education), read the enclosure to his letter to CMs on July 13, 1958. After discussing several issues on point 16, he writes: “This argument led to the old Vedantic conception that everything, whether sentient or insentient, finds a place in the organic whole; that everything has a spark that might be called the Divine impulse (capital D his) or the basic energy or life force which pervades the universe.... I suppose this line of thought, sufficiently pursued, leads us in some measure to metaphysics.” Doesn’t this read like a Vedantin with a scientific temper? Reading Nehru seriously, and rea­ding him historically, and reading him politically, will allow us to appreciate his role as the first teacher of the nation. The nation learned from him. We now take it for granted.

And Nehru was also the architect to the nation.

Mining the pages of his selected works, we can see how he agonised about institutions, about conventions, about the way forward for the India of his dreams (read his letter to Gandhiji of July 5, 1936, on his disagreement with Rajendra Prasad, C. Rajagopalachari and others), his deep commitment to scientific temper with his admonishment of Gandhiji in 1936 for his statement “that the earthquake had been a punishment for the sin of untouchability”. Nehru was not perfect. He made mistakes, like his China policy or his not pursuing a Uniform Civil Code. Today’s postmodernists may criticise him for being scientistic because they have the benefit of subsequent knowledge and of historical hindsight. Nehru did not. He had to build a nation from the embers of Partition. He had to make decisions in, what economists call, a situation of information deficiency. Hence the constitutional protection to minorities. He had to build a modern economy with little money in the bank. Hence the emphasis on the public sector. He had to give India its due place in world affairs. Hence non-alignment. He had to build a common imagination for the nation. Hence the letters to chief ministers. Of course, Nehru made mistakes. But we are fortunate that, in those first decades of independence, it was he and not others as PM who made those mistakes. That is why Gandhiji, in his last letter to Nehru on January 18, 1948, 12 days before his death, wrote playfully—“may you live long and continue to be the jewel of India”. Jewel—Jawahar. And we are now trying to diminish this man. But we just cannot. In his last will and testament, he asked that most of his ashes be “carried high up into the air in an aeroplane and scattered from that height over the fields where the peasants of India toil, so that they might mingle with the dust and soil of India and become an indistinguishable part of India”. This they have become.

(Peter Ronald de Souza is a professor at the Centre for the Study of Developing Societies, New Delhi.)

Footprints Shrunk Over Sands Of Time