A Little Too Frank

Indira's biography rattles Sonia and loyalists, but they're hoping to kill the issue with neglect 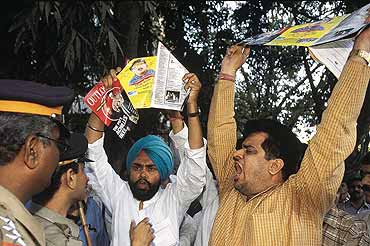 outlookindia.com
-0001-11-30T00:00:00+05:53
Katherine Frank's Indira: The Life of Indira Nehru Gandhi is already a political bestseller, even before the release of its Indian imprint. And, apparently, most of the people buying Indira Gandhi's biography are Congressmen, who want to determine what disclosures could be damaging either personally or politically (or both) to the First Family of the Congress party. Congress insiders say Sonia Gandhi and her children are upset over the nature of sexual disclosures in the book. They have set off a damage limitation exercise, though a bit unsure of how best to handle the sensitive issue.

According to party insiders, the reports regarding the contents of Frank's biography have "rattled" the Congress president and her loyalists, especially as it has come close on the heels of another personal slur: the cbi's chargesheeting of Sonia's personal secretary, Vincent George.

The immediate reactions emanating from the loyalists as well as the family was that "something ought to be done about the book". And Congress insiders say it is the loyalists who seem more perturbed than Sonia. As an immediate reaction, Congressmen in Maharashtra burnt copies of Outlook, which was the first to report on Frank's account of Indira Gandhi's love life (Mrs G's String of Beaus, March 26).

The Congress' dilemma is that with Sonia calling Prime Minister A.B. Vajpayee a traitor in the immediate aftermath of the Tehelka tapes, sources say approaching the government for a ban on the book would be downright silly, and doomed at the outset. Says Union law minister Arun Jaitley: "There is no proposal for a ban on the book as yet. My instincts are always against censorship and banning. I strongly believe in free expression, but authors must also keep the sensibilities of society in mind. Nevertheless, censorship is never an answer."

No wonder, the Congress leadership has been only exploring the possibility of seeking relief through a judicial injunction. But this presents a piquant situation for the party. Frank herself notes that Indira Gandhi was stung when "Salman Rushdie in his novel Midnight's Children resurrected Sanjay (Gandhi)'s accusation that Indira had caused Feroze (Gandhi)'s death.... She successfully sued Rushdie for libel, even though the book was a work of fiction." But that did not prevent it from winning a Booker Prize. Even H.Y. Sharada Prasad, information advisor to Indira Gandhi, tells Outlook: "Normally, what a book ban does is to increase the sales. Better to adopt the attitude: publish and be dammed."

And the controversy has already pushed the sales of the biography. Booksellers told Outlook that 3,000 copies of Frank's book were imported on March 24. In four days, it had been sold out and an additional import order for 2,000 copies had been placed. The Congress is aware of this phenomenon, too.

The course of action to be adopted was complicated by the fact that Sonia was out of the country for the best part of last week, as was Natwar Singh, leaving Priyanka to co-ordinate the matter. When approached for his comment, Singh said he was still reading the book and couldn't therefore comment. It was also apparent that Sonia herself had not managed to read the book till last week. Sources now maintain that till such time as the book is sufficiently scoured for offending material, it would be difficult to define the basis for proceeding against Frank.

Meanwhile, Congressmen have apparently been sent out instructions not to offer the media any comments on the book until a firm decision has been reached.As one senior Congress leader says: "On second thoughts we have decided to ignore the matter; kill it through neglect."

Ultimately, it will be the Gandhi family which will decide on what the approach to the embarrassing issue should be. Should a unified view emerge that would make legal proceeding inevitable, then fresh impetus would be given to the process, currently put in abeyance because the book is still being scanned for offensive material. Among other things, the Congress will have to make up its mind on where to file the case: in England or in India and what the adequate remedy would be for the damages claimed.

The argument against initiating legal proceeding is that it would draw adverse publicity. And anything to do with the Gandhi-Nehru family is squarely political. More importantly, the Congress would not wish to squander the opportunity the Tehelka tapes have presented it on a platter, and it's felt in party circles that it would be unwise to expend political energies battling rumours nearly a quarter of a century old. Indeed, most of Mrs G's alleged affairs that Frank has given fresh currency are recycled tales.

Says Inder Malhotra, author of Indira Gandhi; A Personal and Political biography: "There is nothing in it (Frank's book) that other people have not said. I said it too, albeit more gently." Indeed, in his book published in 1989, Malhotra writes, "In two separate books, Mathai maligned not only Indira but her father, whose alleged philandering he described in great detail, naming names, and in one case, mentioning even the size of the lady's bust. In writing about Indira, however, he was more careful. He did not name her directly in some of his pornographic passages but left little doubt about who he was referring to. For instance, he darkly hinted that the 'person concerned' should be grateful that a video film of her escapades 'in the Dwaraka suite in Rashtrapati Bhavan', the luxurious rooms in the presidential palace where foreign dignitaries stay, was in his 'possession' and not in anyone else's."

In the same page, Malhotra writes: "Interestingly, it was Mathai who, besides pretending to be Romeo to Indira's Juliet, was the first to put into print what many had been saying for years: that there had been a fairly prolonged love affair between Indira and Dinesh Singh, the most important and influential member of her Kitchen Cabinet from 1966, when she first came to power, until he fell from grace over two years later."

What the Congress' first family initially found most revolting in Frank's book are portions relating to Kamala Nehru. Frank writes: "Throughout his life, Feroze was a womaniser—a fact that is hard to square with his devotion to the ethereal, austere, and by her Bhowali days, intensely religious Kamala Nehru. What Kamala's feelings were for Feroze is far from clear. Their unlikely relationship has been explained as a spiritual, Dante-Beatrice one, with Feroze as the admirer of the saintly Kamala. But a Congress leader and jail mate of Nehru's named Minoo Masani... reported rumours about an affair between Kamala and Feroze, who was twelve years Kamala's junior." This has been sourced to an unpublished biography of Feroze Gandhi written by Bertil Falk as well as to the author's interactions with B.K. Nehru, Mrs Gandhi's cousin. Yet Frank has been careful to put appropriate riders in her account.

But, asks a Congress source rhetorically, "If an author does not believe in something, and that something is a rumour or at best an unsubstantiated suggestion, and then puts it there squarely in the book, what does it say about the intent of the author?"

Historian Mushirul Hasan, however, counters: "Public figures invite public scrutiny.This is too trivial an issue for a political party that is embroiled in a life or death political struggle to get involved in. Indira Gandhi's political reputation will not be diminished by such disclosures. If the members of the family feel strongly about it, they should commission an authorised biography and set the record straight." Now to who'll throw the gauntlet to Frank?