A Little Flare To Scientific Temper

It has the power to transform lives, let's strive to strengthen its edifice 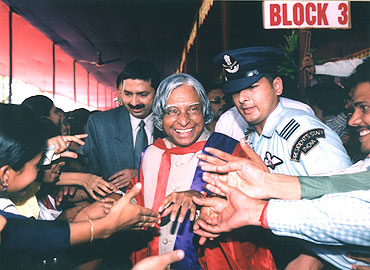 outlookindia.com
-0001-11-30T00:00:00+0553
During one of my interactions with students, Arunava Roy of first year biotechnology from the University of Calcutta asked me a question, "A majority of bright students at the high school level aspire to become doctors, engineers or managers. How can these rich minds be motivated to take up research as a first-grade career option?" This question, indeed, is a reflection of the feelings of many students who are in the 10+2 stage. To seek an answer, I would like to present a few thoughts on scientific magnanimity, the value of science, research areas of the future and creating a national science cadre.

Scientific Magnanimity: I would like to narrate an incident which took place during a function conferring Nobel laureate Professor Norman E. Borlaug—a well-known agricultural scientist and a partner in India’s first Green Revolution—with the Dr M.S. Swaminathan Award at Vigyan Bhavan, New Delhi, on March 15, 2005. Professor Borlaug, at the age of 91, was in the midst of all the praise showered on him by everybody gathered there. When his turn came, he got up and highlighted India’s advancement in agricultural science and production and said the political visionary C. Subramaniam, and M.S. Swaminathan, pioneer in agricultural science, were the prime architects of the first Green Revolution in India. Even though Borlaug was himself a partner in the first Green Revolution, he chose not to mention it.

He recalled with pride Dr Verghese Kurien, who ushered in the White Revolution in India. Then came the surprise: He turned to scientists sitting in the third, fifth and eighth row of the audience. He identified Dr Raja Ram, a wheat specialist; Dr S.K. Vasal, a maize specialist; Dr B.R. Barwale, a seed specialist. He said all these scientists had contributed to India’s and Asia’s agricultural science. Borlaug introduced them to the audience by asking them to stand, and ensured the audience cheered and greeted the scientists with great enthusiasm. I have not witnessed such a scene before in our country. This action of Borlaug, I call Scientific Magnanimity. Friends, if we aspire to achieve great things in life, we need Scientific Magnanimity to focus the young achievers. It’s my experience that a great mind and a great heart go together. This Scientific Magnanimity will attract the youth to science.

Value of Science: Recently, I was reading the two volumes of a book titled The Big and the Small: Journey into the Microcosm—The Story of Elementary Particles, written by Dr G. Venkataraman. The author establishes a fascinating link between particle physics and cosmology. I would like to narrate an incident in the book about Sir C.V. Raman, who was in the first batch of Bharat Ratna awardees. The award ceremony was to take place in the last week of January 1954, soon after the Republic Day celebrations. The then president, Dr Rajendra Prasad, wrote to Raman, inviting him to be his personal guest at Rashtrapati Bhavan when in Delhi for the award ceremony.

Raman wrote a polite letter, regretting his inability to come to Delhi and attend the ceremony. Raman had a noble reason. He explained to the president that he was guiding a Ph.D student whose thesis was due by the last day of January. The student was valiantly trying to wrap it all up, and Raman felt he had to be by his side and see that the thesis was finished, sign it as the guide and then have it submitted. Here was a scientist who gave up the pomp of a glittering ceremony associated with the highest honour because he felt his duty required him to be by the side of the student. It is this character that truly builds science.

New Paradigm for Science: Scientists will not only discover space, but will create an industrial complex on the moon and bring new material from under the sea. Many challenges are going to be thrown on the sea, under the sea and above the sea. Scientists will also face challenges in restoring a clean environment by replacing fossil fuels with renewable energy from the sun, wind and nuclear systems. Some of the future tasks are:

Science Cadre: It is essential for the nation to assure a career for those who wish to pursue science as a mission. This will attract many students with the full support of parents. We should work for the creation of a science cadre, with clear mission goals, a well-defined growth path and attractive salaries. There should be a minimum annual intake of about 400 MScs and 200 PhDs with assured career growth in organisations such as the CSIR, DST, Department of Earth Sciences, Department of Biotechnology, Department of Agriculture, isro, drdo, Department of Atomic Energy and the universities. Starting a number of Indian Institutes of Science Education and Research is definitely a good effort towards attracting youth towards science as a career.

Learning Outcome: According to the India Labour Report 2007, 57 per cent of India’s youth suffer some degree of unemployability. Hence, our higher education system has to determine the learning outcome needed for making every youth employable. For defining this, we need to answer three questions: What would be required of a student in an employment situation? What teaching methods and strategies would be effective? How will the learner be evaluated, similar to what is encountered in the evaluation of workforce? Faculty members should always ask how students will use or apply the knowledge and skills imparted in the workplace.

It is also essential to consider the learning outcome holistically to the programme that has to cumulatively converge through several modules that form the courses. Based on this need, the teachers have to design participatory learning processes such as inquiry learning, problem-based learning, project-based learning, case-based learning and integrative learning. This will need massive training programmes for the teachers, encouraging them to continuously pursue research, widening the education technology infrastructure and, above all, motivating students to acquire world-class knowledge and skills through an ideal learning environment.

Our higher educational institutions are facing a severe shortage of quality teachers. The government is in the process of raising the retirement age of existing teachers. In the long term, this solution may not work. The need of the hour is to make teaching and research more attractive for talented teachers to pursue it as a lifetime profession. Also, the postgraduate and PhD students should be deployed on teaching assignments on a mandatory basis to undergraduate programmes. In addition, higher educational institutions can create a panel of professionals working in industry, research institutions and administration with a passion for teaching, to take specific courses to the students based on their core competence.

Finally, educational institutions should apply information and communication technology to provide the benefits of quality teachers to multiple classrooms in distant areas using tele-education. These actions need to be implemented by our higher educational institutions on a priority basis especially since all the institutions are in the process of increasing the number of seats this year. Let us all work together to realise the goal of providing value-based quality education to our youth.

(The author is the former president of India.)