As aid management remains in tatters, and many areas thirst for relief, the Gujarat government caves in to utter chaos 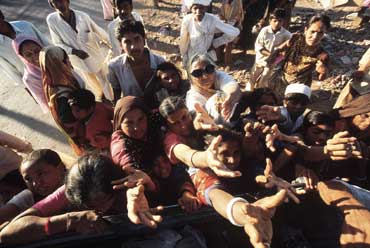 outlookindia.com
-0001-11-30T00:00:00+05:53
February 6: Bhuj. Angry quake-affected villagers and townspeople have gheraoed the district collector. "Hand over the charge to the army. Let them distribute the relief," they shout. The protesters are convinced the relief meant for them will lose its way in the maze of sarkari machinery. Many villages have already been deprived of promised help even as the relief items pile up. Now, the people here feel forsaken even by the state administration.

Over the days the discontent ferments. The mismanagement of relief in Kutch has become a sore point. The only sign of order people saw in the chaos was the army. But they're worried that with the army's rescue operation in its last stages, they'll once again have to suffer the ineffectiveness of the civil administration. At the Lalan College grounds in the ruins of Bhuj town, the dust hasn't settled yet. Day and night, hundreds of trucks roar in to offload tonnes of relief supplies sent from across the country and the globe. Although companies of the Rapid Action Force (raf), Central Industrial Security Force (cisf), state police and home guards have just one job on hand—managing relief—chaos still rules here.

With relief supplies constantly pouring in, there are veritable hillocks of foodsuffs like milk powder, biscuits, canned orange juice, brown cheese, pickles, bread, potatoes and food grains. The tragedy is that all this is gradually perishing due to the laggard distribution system. Just who is to blamed for this mismanagement? The allegations are flying thick and fast. On one hand, civil administration officials have time and again blamed the army for ineffective relief operations. On their part, the army is annoyed by the fact that it's being 'unnecessarily' dragged into the controversy and forced to share the burden of relief failure in the quake-hit areas. The district collector of Bhuj even went to the extent of blaming army troops for frittering away relief supplies. Already facing embarrassment due to the sluggish movement of relief in the affected areas, the bureaucrat was transferred. The relief work at Bhuj is now on under the supervision of the new district collector, Anil Mukim.

Meanwhile, on the ground it's a virtual free for all. Hundreds of people from the town and adjoining talukas move freely inside the makeshift warehouse and leave with oversized bundles of clothes. Frenzied crowds fight over the prized catches. Men in uniform, sweltering under the sun, relish canned Florida orange juice, full cream milk, brew foreign coffee and sip chicken soup during the cold evenings. "I heard that many good clothes are lying abandoned in Lalan grounds, so I hired a mini tempo from Gandhidham and came with my wife and other family members to take it away," says Keshavbhai Solanki, a petty trader who sells old clothes. It's people like him who are muscling in to corner the aid.

But barely 5 km away from the Bhuj district collector's office is Fateh Mohammed Hazir village. Here, Ramzan Musha Notiyar's family is living under plastic awnings. Casual labourers surviving on daily wages, they've been rendered homeless after their stone house collapsed in the quake. "The plastic sheets are our own and we're living on rations we recovered from the debris," they say. The family was quick to give up attempts to seek relief or compensation. "It is a maniacal mob and only ruffians are getting the relief. Reticent people like us have resigned ourselves to our fate," says Hashim Ramzan, Notiyar's elder son. The Notiyar's experience explains the mismanagement of relief at the district headquarters of Kutch, which saw the maximum devastation and is also receiving the largest quantum of relief. Hundreds of relief workers, government representatives, ngo volunteers and foreign teams are camping in Bhuj. But relief operations have been haphazard from day one. Those requiring tents have been provided with cornflakes. People in need of food are being given strips of tablets for treatment of diarrhoea and indigestion. Those rendered homeless have been provided clothes like jeans, bermudas and mini skirts that don't even fit them. And while Kutchis are largely vegetarian, cans of tinned sardines are being generously distributed.

All this goes on despite the army's 16,450-strong presence in the district and the fact that it had to virtually take over Bhuj. But their work was hampered by a reluctant civil administration whose slow response made matters worse. Unlike in Ahmedabad, where a majority of the troops of 11 Infantry Division were out on exercise in the Rajasthan deserts, Bhuj luckily had sufficient troops at the time of the quake. Later, additional troops were requisitioned from Ahmedabad and Jamnagar.

Says Major General V.S. Budhwar, chief of staff, 12 Corps, who is monitoring the rescue and relief operations in the region: "A total of 419 people have been rescued from the debris by the troops whereas 1,600 bodies were recovered from the rubble. The military hospital, which caved in during the quake, was shifted to tents and 791 major surgeries and about 7,000 minor surgeries were performed in the makeshift hospital." Ironically, while the babus at the district collector's office panicked and the officialdom at Ahmedabad turned numb, the army in conjunction with the air force base at Bhuj took command: amputating limbs of trapped survivors to pull them out, restoring water, installing generators, making roads, clearing debris. Says a senior officer: "While our men were struggling to rescue the trapped survivors, the police, home guards and municipal babus covered their noses with handkerchiefs." Adds another officer: "It is very disturbing that the military is being implicated for lack of coordination in the relief operations. Our role was restricted to rescue work. The relief is being solely managed by state government through its own machinery. The army, on the other hand, is providing relief from its own resources." Army officials aver that the Gujarat government can't escape the responsibility for a series of blunders it committed in the aftermath of the quake. Indeed, the streamlining of relief operations is yet to be achieved even a clear fortnight after the tragedy.

Now with the rescue operations almost over and the army's role being restricted, the ball will soon be back with the civil administration. Already, relief received by the state and channelised through its agencies are piling up at makeshift warehouses and either being given to undeserving people or being consumed by officials or simply decomposing due to delay in supply of perishables. So, while there are villages facing a problem of plenty at other places, life is no better than it was in the immediate aftermath of the quake. Scarcely 20 km north of Bhuj, at Lodai, villagers are still awaiting government relief. A population of about 3,000 went without succour for almost four days before the army discovered them. A unit of the 16 Bihar Regiment is now administering relief in the village where 22 lives were lost.Says Naveenbahi Mehta, a local grain dealer: "The state government perhaps does not even know of our existence. No one has visited our village till date to take stock of the situation."

Contrast this with Kukma village in Bhuj taluka. It's almost flooded with relief supplies—tents, blankets, food packets, noodles and corn flakes. Relief agencies could be seen dumping their supplies before anxious crowds along the highway. There was no machinery in place to guide them on where to unload the relief. At Ratnal, where the devastation claimed 181 lives, relief is mainly being supplied by the army. One of the most populated villages in Kutch with a population of 6,000, Ratnal has now turned into a wasteland. The survivors have been moved into tents provided by the army and usaid. Says Jevabhai Aher, the village head: "We find it below our dignity to beg for relief from the state. Give us some time, we will start our lives afresh."

While anarchy rules the state machinery, at the HQ of the 11 Infantry Division in Ahmedabad, there's a sense of having done the best under the circumstances. About 4,000 troops, many of whom had just returned from postings in Kashmir, rescued 59 people from the high-rises. Recalls Naik Subedar C.P. Upadhyay: "We didn't have sophisticated equipment nor an idea of such rescue operations, we dug up tunnels using our own judgement and saved many lives. We were surprised that people had no faith in the civil administration and reposed trust in us."

But nothing seems to move the officialdom at Ahmedabad. While home minister Haren Pandya is visible in the print and electronic media with assurances that everything was being done, the affected people have begun to lose hope. "Numerous agencies from all over have landed in Gujarat in such a short time that it is virtually impossible to keep track of them. Also, we are receiving relief material that the people can't use. So there is definitely some chaos. But we will regularise all this in a few days," says a senior bureaucrat. But for the people left untouched by the relief measures, it's already been a long, dark wait.

'If  politicians are guilty, haul them in'