We in India lack contemporary history of the digestible, Datta-Ray kind. This book will sit well on our shelves. 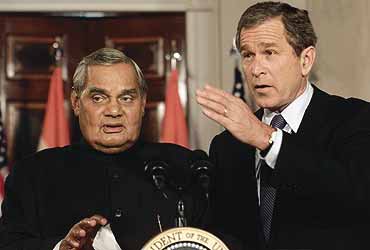 Sunanda K. Datta-Ray’s huge book on Indo-US relations since the early ’80s joins the shelf-load of books on how the world’s largest democracies deal with each other. Datta-Ray is one of India’s most respected journalists. An elegant writer with an eye for story-telling and a no-nonsense analytical pen, he traces the course of Indo-US ties from the time Indira Gandhi opened them in 1982.

The title Waiting for America refers to Datta-Ray’s basic argument which is that India has been and is, even now, waiting for the US to tilt to New Delhi diplomatically, particularly in relation to Islamabad, and to craft a richer, more thorough-going partnership with India economically, technologically and strategically.

According to Datta-Ray, every Indian leader, contrary to popular perception, has courted the US since Indira Gandhi. Rajiv Gandhi, V.P. Singh, Chandra Shekhar, Narasimha Rao, H.D. Deve Gowda, I.K. Gujral and A.B. Vajpayee all recognised that India’s stance towards the US had to change. Economics was at the heart of the change: by 1982, India desperately required American investment, technology and consumer goods to increase growth rates and satisfy the demands of a burgeoning middle class. Strategic imperatives too were important: India needed US military technology as well as its influence in dealing with the perennial problem of Pakistan.

Datta-Ray tells his story at various levels—individual, institutional, intervention of private groups and interests (particularly on the US side) and, of course, the interplay of national interests. The story proceeds chronologically through prime ministerships, presidencies and ambassadorships. For those who like their public affairs reading to be accessible and entertaining, Datta-Ray does not disappoint. The book is rich in anecdotes, sharply-etched portraits and humorous...