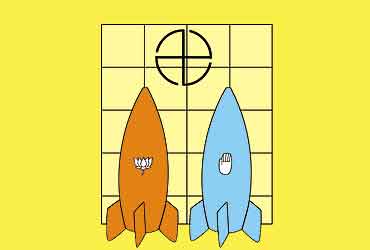 It is hardly surprising, therefore, that Advani's announcement should have sent a frisson of fear through the minorities—terrorised as they are by the recent memories of the Gujarat carnage that began at Godhra with the burning of two train compartments, purportedly full of kar sevaks. That is exactly what the Opposition wants to capitalise upon. But the similarities between the uday yatra and the yatra of 1990 are entirely superficial. Although Advani has chosen auspicious days on which to start and end his yatra and locations that deliberately recall the Adi Shankaracharya's pilgrimages across India in the 8th century, his attempt to mobilise the powerful symbols of Hinduism ends there. This yatra will not be on a jeep decked up to look like a chariot from the battle of Kurukshetra, but a refurbished (and presumably air-conditioned) campaign bus. And the deputy PM has left no one in any doubt that his purpose will be to showcase the nda's achievements over the past five years.

Should we take Advani at his word, or is there a likelihood that in the face of cheering crowds of the faithful, the old Hindutva rhetoric will surface again? Everything that has happened in the past year suggests that no such thing will occur. Beginning with Vajpayee's January 2003 musings from Goa, both he and Advani have worked assiduously to distance the BJP from the crude anti-Muslim propaganda that Narendra Modi employed to polarise the vote on communal lines and secure victory in the state elections in Gujarat. Both have stressed that Hinduism is pluralistic and secular by nature and implied that an exclusionary interpretation of the religion—precisely the ideological raison d'etre of the BJP's birth and ascendancy—is perverse. Advani went so far on one occasion as to assert that India had to be secular and there could not be a Hindu rashtra. This drew the VHP's ire. It promptly labelled him 'pseudo-secular'.