Home  »  Magazine  »  Arts & Entertainment  » Dissenting Note »  A King Without Royalty: Ilaiyaraaja Fights For His Due

A King Without Royalty: Ilaiyaraaja Fights For His Due

Composer Ilaiyaraaja fights for his due, and the industry shows cracks 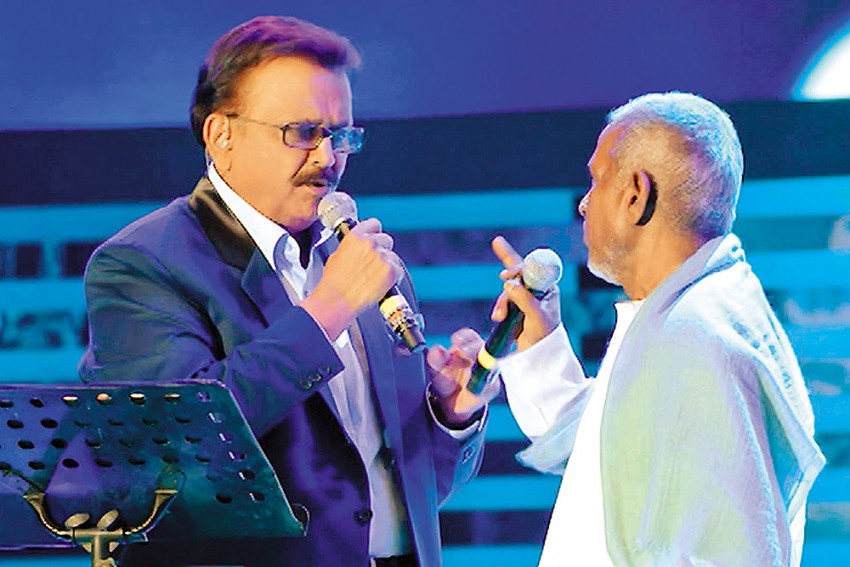 Past Bonhomie
S.P. Balasubrahmanyam on stage with Ilaiyaraaja
G.C. Shekhar December 06, 2018 00:00 IST A King Without Royalty: Ilaiyaraaja Fights For His Due 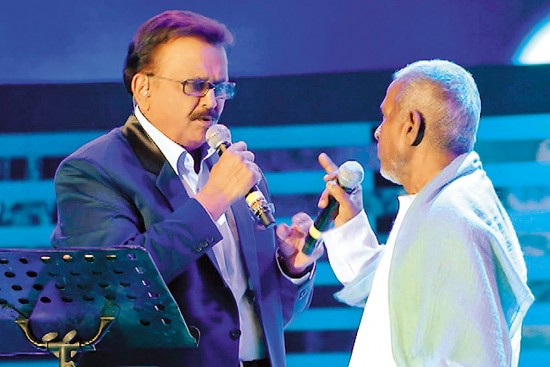 Lakhs of Tamils tune into his music bef­ore going to sleep. Successive generations swear that his romantic songs will remain etched in the popular consciousness as love anthems. Even today, no live orc­hestra show in Tamil Nadu is complete without at least a dozen Ilaiyaraaja songs spanning over three decades.

And yet, the 75-year-old doyen recently had to plead openly that he needed to be paid royalties for public performances of his songs. “It is my creation, and when you earn money from that, should I not get my due share from that?” he asked in an emotional video post. He also ­cautioned that failure to honour his request would lead to legal action.

Ilaiyaraaja’s blunt anger and choice of words had many fuming that the maestro had become greedy in his old age. The outrage on social media was matched only by the silence of other composers, many of whom cite him as their musical inspiration. None of them came forward to back Ilaiyaraaja’s allegation that the Indian Performing Right Society (IPRS) had failed in its duty of keeping track of his songs being performed in ticketed shows across the globe, thus denying him crores of rupees due to him under copyright laws.

With the largest ever body of film songs—over 1,000 films and 5,000-plus songs—the Padma Vibhushan awardee was naturally miffed at the inaction of the IPRS, and recently announced his exit from the organisation. Instead, he nominated the Chennai-based Cine Musicians’ Union, consisting of film musicians from the south, to monitor his music’s ticketed shows and monetise them. He said 20 per cent of the money would go to the union for the welfare of hundreds of instrumentalists who have lost their jobs with the arrival of digitally created music. 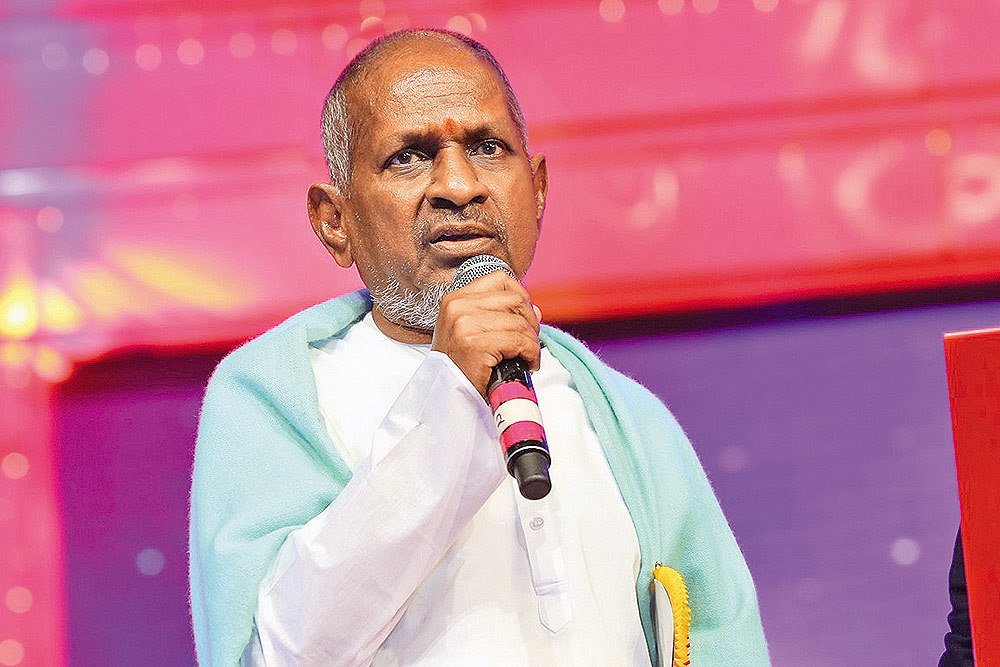 “It is my ­creation, and when you earn money from that, should I not get my due share?” asked ­Ilaiyaraaja.

Even in March 2017, Ilaiyaraaja had a legal not­ice served on his dear friend and singer S.P. Balasubrahmanyam (SPB), asking the latter not to sing his songs during a US tour, as the organisers had not sought his permission or paid him any royalties. SPB, who had collaborated with Ilaiyaraaja in over 300 films in Tamil and Telugu, had to hurriedly rejig his playlists by singing compositions of other music directors. “The fans wanted to hear Raaja’s melodies, but I had to res­pect the feelings of my elder brother,” says SPB, who reacted graciously to the unseemly stand-off. The two artistes, known for their ­on-stage bonhomie, have not been on speaking terms since then.

Tamil film music director Dhina, who now heads the Cine Musicians’ Union, justifies Raaja’s grouse, pointing out that a north-south divide in the IPRS has wrought injustice towards southern composers, especially those who had arrived before the digital distribution of music came into vogue. “Can you imagine that a Hindi composer with just ten films and Ilaiyaraaja with over 1,000 films were both paid 13 lakhs as royalties by the IPRS? One of my hit songs, ‘Manmadha Raja’, has been credited wrongly to another music director from Mumbai, and its royalty earnings are being paid to him. I’ve been fighting for four years to get this rectified,” says Dhina. Songwriter and poet Javed Akthar, who is currently chairman of the IPRS, admits that grave anomalies have haunted the functioning of the rights body, but stresses that efforts are on to set things right. (see interview)

Composers like Ilaiyaraaja and his contemporaries, who arrived and made their mark in the ’80s, have also felt short-changed by the legal conditions imposed by many music companies that denied them any share from the exploitation of their creations in digital formats. “While the likes of A.R. Rahman, and even Raaja’s son Yuvan Shankar and the younger crop of music directors, firmed up their royalties from downloads, streaming apps and mobile caller tunes, Raaja sir had to wage a legal battle for the same. When he approached the IPRS for justice, its agents would show up and dem­and money to settle the dispute, adding insult to injury. This is no way to treat a genius revered across the world,” rues musician Ganesh, an ­authority on Ilaiyaraaja’s compositions.

“Ilaiyaraaja’s battle is also bound to benefit lyricists and singers as the 2012 amendment to the Copyrights Act assures the right to royalty to the music composer, lyrists and singers for any use of their work outside the film. The amendment also makes illegal any surrender of the right to royalty through contract,” points out Muhammed Faris, a research scholar in intellectual property rights. He also wants to ensure that musical creations are available at an affordable price for performers in clubs, restaurants and other social functions.

To regularise the performance of Ilaiyaraaja’s numbers, the Cine Musicians’ Union has published a tariff card for the amount to be paid for ticketed concerts, as background music at malls, retail stores, restaurants, pubs and discos, while exempting family functions, village and temple festivals and cultural events at educational institutions. But when asked if it would be possible for the union to keep tabs on shows across the world, Dhina says an expert team of lawyers and technically savvy music lovers can monitor these. “A.R. Rahman has a good management team that takes care of the royalty issue, and we will take their ­advice as well,” he says confidently.

Those most worried are local music troupes that perform in Tamil Nadu and neighbouring states. Now they or the organisers will have to cough up a percentage of the collection to the union. “Our concerts are incomplete without Raaja sir’s songs, which actually form the bulk of our repertoire. You can find live instruments and singing only in orc­hestras like ours, while even in big ticket events many singers merely lip-sync popular hits played from recordings. If they can concentrate only on foreign tours and spare us, the livelihood of many musicians will be protected,” says U.K. Murali, owner of a music troupe.

Ganesh, however, argues that this is not just about money, but about the recognition due to a musical legend: “That Raaja sir has to fight for what is leg­itimately his creation is a sad commentary on how we treat our artistes. The music ind­ustry should look beyond money, and do justice to a national treasure.”

Modinomics: How Has Modi Govt Fared On The Economy? It's Time For An Audit