A Kernel Of Truth

A web of sheer lies, surrounding systemic neglect, describes the starvation-death scenario in Raigada. And even page-one shock treatment is no cure. 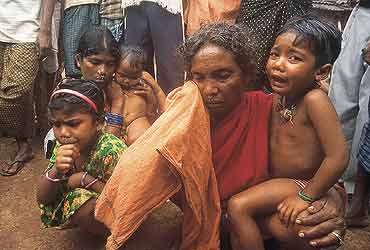 outlookindia.com
-0001-11-30T00:00:00+0553
The Orissa government's predicament is pretty much like that of the French royalty on the eve of the revolution. Chief minister Naveen Patnaik seems to suggest that if bread is not available to the tribals, then they should eat cake. Put another way, rice is available in plenty, but people, alas, prefer to eat rotten mango kernel.

A fortnight after starvation deaths became public knowledge, there seemed no truth in the Orissa government's assertion that the 24 tribals who died in Raigada were victims of their tradition of consuming mango kernel and boiled grass even while grain is available. Those who died had actually been driven to eat poisonous, fungus-ridden mango kernel for want of a better choice. They were victims of starvation who were denied basic medical attention after they trudged miles to the nearest government hospital.

In this deceptively idyllic and lush green landscape of Raigada lurk hunger and death, even as a callous state government machinery turns a blind eye. The fact that of the 280 families in one of its villages only 30 have below poverty line (bpl) cards points to the shocking state of the pds here.

Based on interviews of villagers as well as officials, conducted by this correspondent in Tikiri, Bilamal, Panasgunda, Pitajodi and other villages in Kashipur block, where the 24 starvation deaths occurred, Outlook can confirm the following facts: