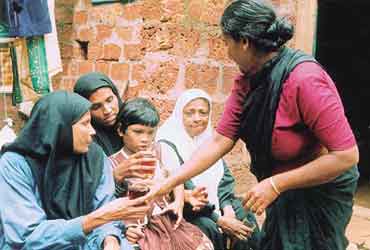 outlookindia.com
-0001-11-30T00:00:00+0553
They called him the chief minister of a secular party siding with the Hindu right. The Left, with biting sarcasm, referred to him as a clone of Praveen Togadia. The church did not take kindly to some of his anti-minority community remarks. And the Muslims vent their anger by voting against the Congress in the recent Ernakulam parliamentary by-election. Their main grouse: the Congress-led government had failed to rehabilitate the Muslim families who had fled Marad village in Kozhikode after the May 2 massacre in which eight Hindu fishermen were slain.

But the chief minister has braved all odds. Even as his detractors branded him a Hindutva agent in Christian robes, Antony called representatives of the VHP and the Muslim League to the negotiating table. While the meeting was still being planned, his critics from the Left and the Karunakaran faction in the Congress were carping that "it was a sellout to the Hindutva forces". Now the criticism has ebbed. The chief minister has finally succeeded in brokering peace.

Much before Diwali, the government would have completed the rehabilitation of all 300-odd Muslim families who were forced to flee the coastal village of Marad after the carnage. The families have begun to return. The only jarring note has been minor protests from women volunteers of the Araya Samajam (a committee of Hindu fisherfolk) who lost their calm at the sight of families of the massacre accused coming back to their homes.

But the heartening thing is that the peace pact has come to stay and has been accepted by members of both communities. The state government has undertaken repairs of the houses of Muslims which were damaged. Relief of Rs 1.46 crore is being distributed among the kin of the dead and the injured. For the record, even state Congress unit president K. Muraleedharan, Karunakaran's son, said at an all-party meeting at Kozhikode: "Let peace return."

How did Antony swing it? Who were the dramatis personae? Some of these events probably held the key.

The first inkling of peace came in the form of a phone call to Cliff House, the official residence of the chief minister in Thiruvananthapuram, early in the morning on September 30. P.P. Mukundan, BJP state organising secretary, was at the other end. He said he was ready to discuss peace and that he had already got the go-ahead for the initiative from the RSS state headquarters at Kochi. He, however, had a few conditions.

Recalls Mukundan: "When I reached Cliff House, it was virtually in mourning. Antony was distraught. He had to keep his promise of rehabilitation by Gandhi Jayanti, October 2. Having mobilised nearly 7,000 cops in and around Marad, Antony had no choice but to order the rehabilitation of the Muslim families. The police feared the worst."

The BJP's main condition to talking peace was a promise that a CBI inquiry be initiated into the massacre. He wanted the agency to look into the alleged inter-state conspiracy. By now Muslim League legislature party leader P.K. Kunhalikutty, who is also the industry minister, too had publicly said he was not against a CBI probe. But in private he was not sure of the ramifications of entrusting the probe to an agency under the BJP-led government at the Centre.

Phone calls went out to Antony's inner circle in the cabinet. To trusted lieutenant Oommen Chandy and, of course, to Kunhalikutty. Mukundan kept the line open to the Hindu Aikyavedi leader, Kummanam Rajasekharan, and Kozhikode-based Araya Samajam secretary T. Suresh. Gandhi Peace Foundation chairman P. Gopinathan Nair too was sounded out. By the evening of September 30, Antony ordered the police to go slow on arrests and other hard preventive measures.

On October 2, leaders from the Hindutva spectrum and Muslim League ministers agreed to meet at Kozhikode.At the end of the marathon talks, a core committee was formed to take the draft of the agreement to the CM. In Thiruvananthapuram, Antony insisted that both sides whole-heartedly stick to the terms of the agreement. A sham accord would collapse at the slightest provocation.

On October 5, Gopinathan Nair formally handed over the agreement to Antony. As per one of its clauses, the cabinet which met on October 8 referred the main demand for a CBI probe into three aspects—the conspiracy behind Marad massacre, inter-state connections and extremist links—to the advocate-general for an opinion. His counsel is still awaited.

For a change, the government machinery rose to the occasion. Three days after the cabinet decision, the government coordinator of Marad, K.K. Vijayakumar, was in Kozhikode with cheques for Rs 1.46 crore, as relief for the victims. He distributed an ex-gratia relief of Rs 10 lakh each to the next of kin of the dead, Rs 5 lakh to those hospitalised with critical injuries and Rs 3 lakh to the other injured. Even the family of Asgar, the assailant who was done in by his own men on May 2, was eligible for the compensation.

By showing that he was sincere and by involving all the parties to the dispute, Antony pulled off what had seemed impossible just a few months ago. Now that the Muslim families have returned, it is for the government to ensure that the channels of communication between the Hindus and the minority community remain open.