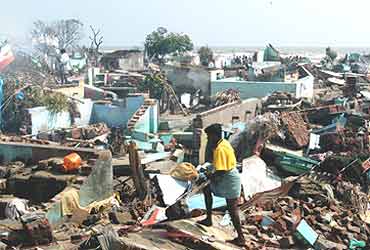 outlookindia.com
-0001-11-30T00:00:00+0553
How safe are our cities? And how vulnerable are our small towns and villages? It takes a natural disaster of the scale of the December 26 tsunami for the government to revisit these questions. The last time was after the Gujarat earthquake in 2001. A study conducted by the Ministry of Home Affairs (MHA) and the United Nations Development Programme (UNDP) had then identified 125 districts across the country as "most hazard-prone". A list of 38 quake-prone cities was also drawn up. These included all the four major metros, eight state capitals and other important cities like Pune, Agra, Vijayawada and Kochi (see infographic).

In 1997, the Centre had compiled a national vulnerability atlas which listed many do’s and don’ts. But these have been blithely ignored by planners, architects and engineers. Which is why Prof A.S. Arya, the seismic advisor to the home ministry who headed the committee that brought out the atlas, says, "Almost 85 per cent of the country’s buildings are liable to damage to varying extents in any future earthquake." What he leaves unsaid is that thousands of people would die in the best of Indian cities.

Take Delhi. If a quake of the scale that hit Gujarat in 2001 (7.9 Richter, according to higher estimates) occurs in the capital, the economic cost would be around $16 billion. Munich Re, the world’s largest re-insurers, made this estimate but did not, of course, factor in a body count. Experts agree it could easily be in tens of thousands. And that tragedy is waiting to happen. Earthquakes don’t kill; buildings do. The capital’s buildings, particularly private residential ones, have been mostly built with scant regard to building codes.

Says Professor R.N. Iyengar of the Indian Institute of Science, who prepared a microzonation map of Delhi: "Our public infrastructure was largely constructed according to building codes and hence could withstand tremors. But most private buildings have come up in filled-up areas like farm fields, ponds or garbage dumps. In many cases, the soil is weak and extra precautions should be taken."

Delhi has as many as 20 faults in a radius of 300 km around it. Thirteen are in the Delhi region and seven in the Himalayan region. Seven of these 20 have the potential of unleashing tremors of magnitude 6.5 to 8. Still there’re no mandatory land use guidelines that would enable people to know where not to buy property. Despite the alarming risk, says Iyengar, not much study has been done in Delhi on subsoil mapping up to the rock level. "The soil in Delhi is varied. Different places in the capital will vibrate in different ways. More intensive study of Delhi’s sub-surface conditions is required to determine what construction is safe in which area."

Earthquake risk is a factor of the likely intensity of the actual quake and the vulnerability of the building. Most human losses are due to the collapse of man-made structures. Like cracks on a building, faults are cracks on the earth’s crust and epicentres emerge anywhere along pre-existing faults. Mapping earlier epicentres and faults, seismologists have been able to point out potential quake areas. But even within a particular zone, there could be more and less vulnerable areas.

The Geological Survey of India and the Meteorological department put Delhi in the high-risk Zone IV, and Mumbai, Chennai and Calcutta in the risk-prone Zone III. But such classification does not quite reflect the vulnerability quotient of a city. Ahmedabad is in Zone III, but with penthouses and swimming pools atop high-rises, residents hardly have a chance of survival even if the epicentre of a quake is hundreds of miles away.

The magnitude of a quake is the measure of energy released during a tremor and is measured on the Richter scale. The global standard derives from MSK 1964, an intensity scale of one to 12 according to which anything starting with nine is categorised as Zone V or a very high-risk area. The entire Northeast, and cities like Srinagar, fall under this zone, and Delhi has a high risk of facing devastation up to intensity level eight.

Mumbai is no less vulnerable. Though even primary microzonation data isn’t available on other cities, according to Iyengar, the risks that Delhi faces abound in Mumbai. There are 22 faults in the Mumbai region within a radius of 300 km, with a few identified on the seabed near the coast. The Panvel flexure or fault, just 30 km away from the city, is one major fault that runs parallel to the west coast. People ran out of their homes in Mumbai when a quake struck the Koyna dam in December 1967. Though 194 km away from the city, the tremors led to several buildings developing cracks. Not all constructions are quake-proof. In a city where housing is a major problem, the idea is to generate as much living space in a given area. So all too often laws are violated when making high-rise buildings.

Calcutta runs the added risk of being on a very high cyclone-risk zone apart from the quake threat. The Dauki fault running through Assam bordering Bangladesh can impact the city. So would the fault running across the Malda-Balurghat region and other major faults in Bankura and Birbhum. The eighth-largest recorded quake on the Indo-Chinese border in 1950 in Arunachal left Calcutta shaking.

So, with disaster lurking, what has the government been doing? Along with the UNDP, it has launched a national disaster risk management programme worth $27 million over a six-year period starting 2003. But even those in the government admit that official action is limited, particularly to reduce urban vulnerability, because the government simply does not have enough manpower or money to examine or retrofit existing structures.

In fact, most of what is prescribed by experts is often ignored. Here’s what the official vulnerability atlas had prescribed for Nagapattinam, one of the worst-hit towns in the tsunami disaster: "Properly designed and maintained cyclone shelters against tidal waves which can rise above three metres." Had this recommendation been taken seriously, the damage caused by the killer waves would perhaps have been far less intense. If only...