A Hundred And One Nights On The Edge 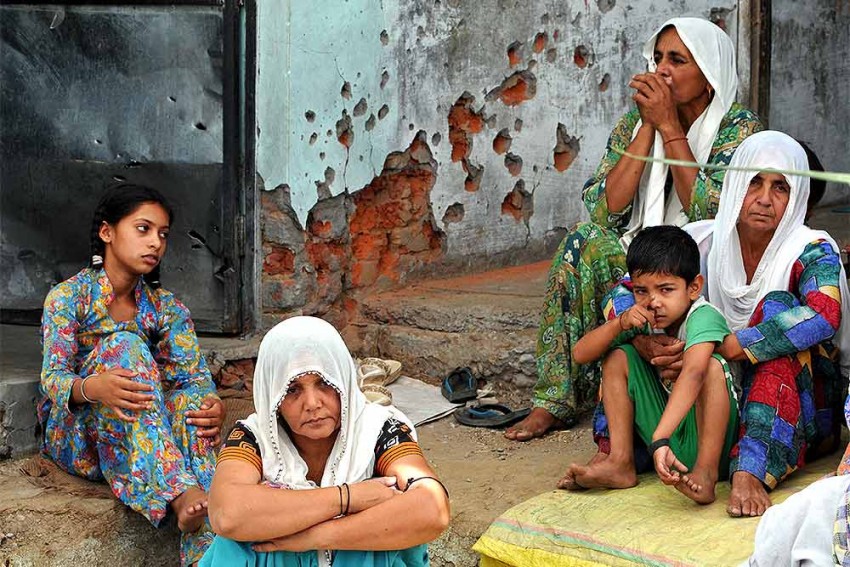 Broken Lives
Relatives of Krishna, who lost his life, in Banglad
Photograph by Tarun Upadhyay
Tarun Upadhyay June 06, 2018 00:00 IST A Hundred And One Nights On The Edge 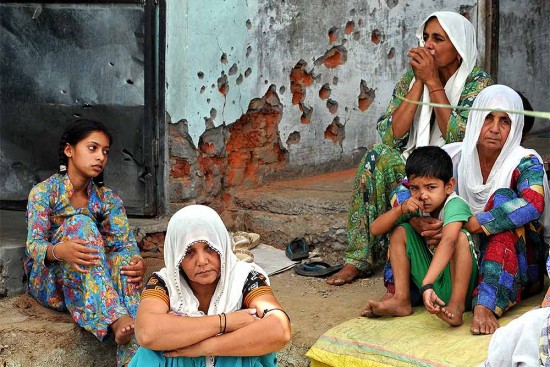 If all that warring nations do about ‘collateral damage’—an euph­em­ism for civilian casualties—is to couch them in pious platitude, squa­bbling nati­ons cover the matter in victimhood and reprisals. The villages that cower helplessly on the border in Jammu, receptacles of indiscriminate Pakistani shelling in this season of firefights, are largely left to fend for themselves.

In Banglad village in Samba district, about 50-km from south of Jammu town, a disconsolate Shiv Pal, 13, is unable to perform the shraddh rituals of his 8-year-old brother, Krishna, who died in the shelling on May 21. Shiv Pal, too, was inj­ured by the spray of splinters. Lying on a cot in his home, he passively watches his cousin performing the rituals.

READ ALSO: A Foot In The Maw Of Perdition

“I am not sure when I will attend school; we can’t trust Pakistan,” he says six days after DGMOs of India and Pakistan agreed to observe 2003 ceasefire agreement on May 29 in ‘letter and spirit’. Shiv Pal’s words were prophetic—the next day, on June 3, two BSF personnel were killed and 16 injured in the adjoining Akhnoor sector by Pakistani shelling. Normal life was thrown out of gear—temporary shelters for thousands of displaced people were set up; in all, 28,000 people in 31  villages were in the line of fire. 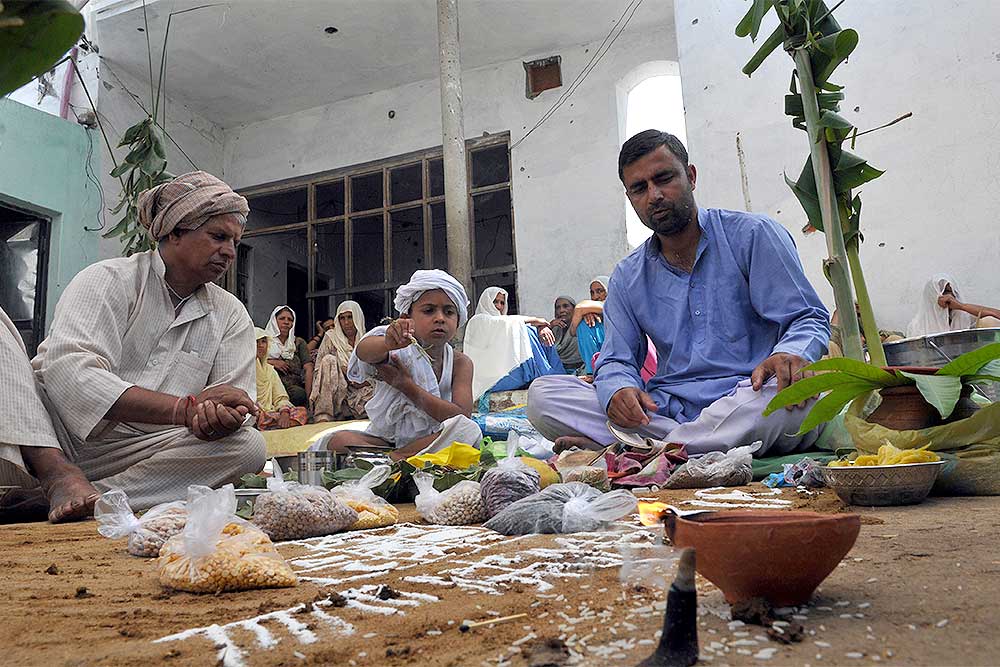 Photograph by Tarun Upadhyay
With Pakistan violating the ceasefire, villagers along the border in Jammu panicked. Till June 3, 20 civilians have died in border firing.

With Pakistan violating the ceasefire at will, panic spread like wildfire along the international border in Jammu. About 40 km south of Akhnoor, at Jeora farm in RS Pura sector—home to around 2,000 Muslim Gujjars—people started moving out early one morning two weeks back after it received its share of pounding. On May 23, 200 kullahs (grass and mud huts) were burnt down  by shellfire, leaving a trail of ashes, bloodstains and injured cattle.

The sole person standing guard over 500 huts in the now-derelict village is 70-year-old Har Din. “When we heard about two sides agreeing to maintain peace we took it with a pinch of salt. Once shelling started in Akhnoor, people started leaving. Once firing starts in one sector, it spreads all along—a pattern, a curse,” says Har Din, who lost his five-yr-old grand-daughter to shelling. For Gujjars here, shelling has not only claimed lives, but it has hit at the very source of their livelihood—livestock. Forced to keep their cattle in ‘safer’ places without proper feed and water, milk production has fallen by half. 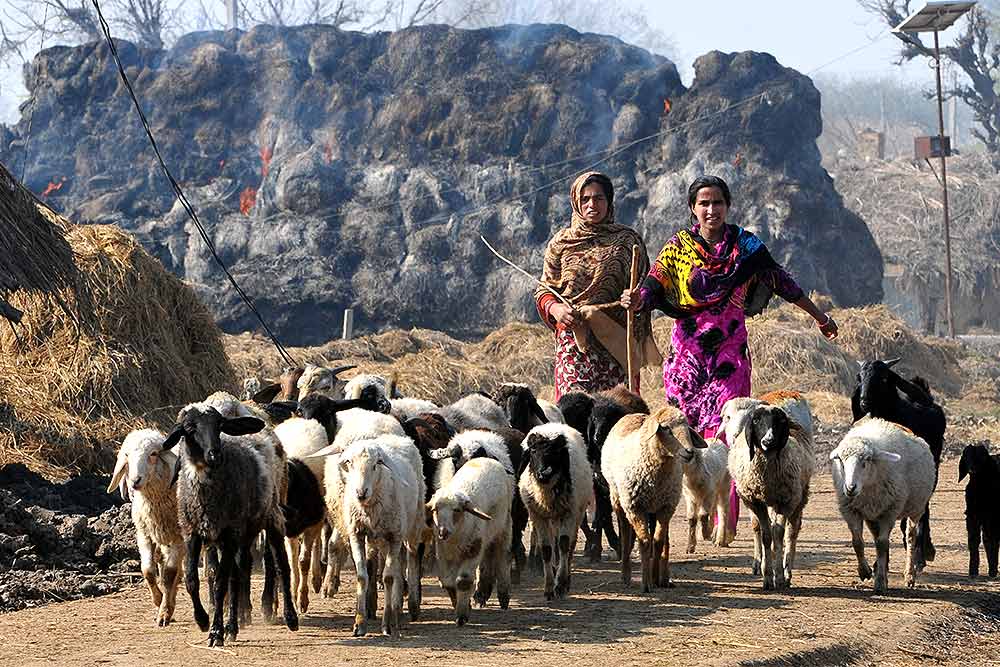 Gujjars of Jeora farm drive their sheep amidst their charred, destroyed huts

Sitting under the shade of a tree, a bitter Rehmat Ali says, “The government has played a cruel joke on us by asking us to go back. Had we not been rearing cattle, we would have left this place forever and taken up menial jobs elsewhere. The government should either kill us or let us live in peace. We are fed up.” He is accompanied by his cousin’s two young daughters; all are miserable, for they didn’t have food to break roza with, and will have to wait for a hand-out.

In this fresh, fierce round of firing—timed with the advent of Ramzan—by Pakistan between May 15 and 23, 12 people had died and about one lakh were displaced. In all, till June 3, 20 civilians and 20 security personnel died in border firing in the Jammu region alone, with dozens injured. It’s a recurring cycle that seems to have no remedy. 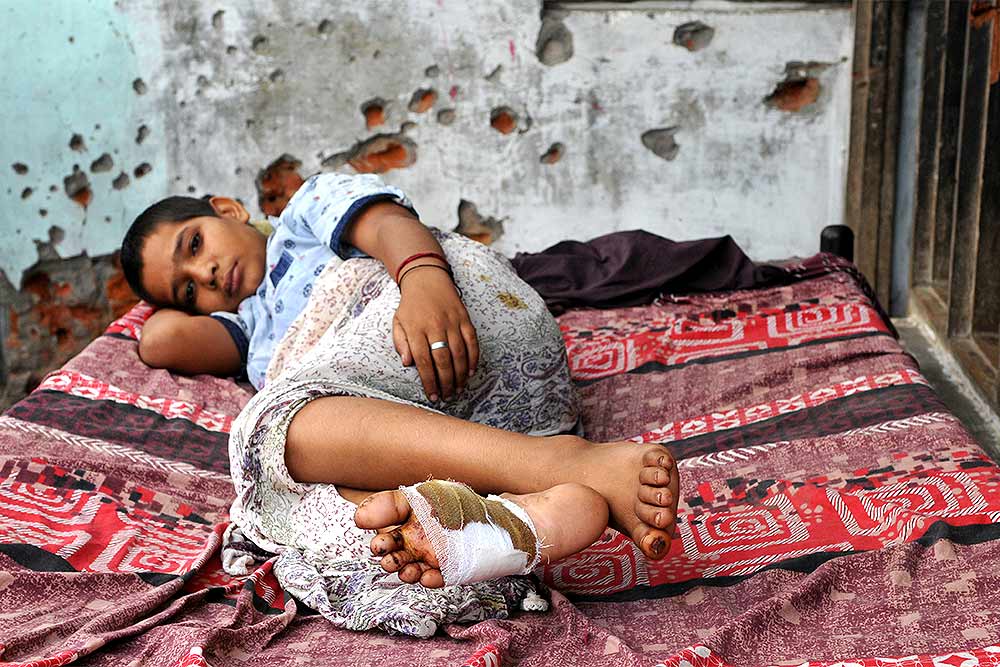 An injured Shiv Pal in Banglad

Indeed, death and destruction of property, followed by swift fleeing—the whole experience framed by the deafening crump of shells—have, to an extent, been an accepted fact of life for border residents in Kathua, Samba and Jammu districts. For a generation grown up amidst a periodic, hostile slinging of projectiles between India and Pakistan, peace is a slippery concept. Besides, living along the border is a ‘compulsion’.

A palpable sense of fear stalks border villages despite the much-touted agreement to observe the ceasefire. In Ban­glad, 20-year-old Pawan Kumar has completed the shraddh rituals of his mother, Shama Devi—another hapless victim of shelling. “My mother died on May 21 while cooking a meal. We are not sure of returning safe from our fields. They (Pakistan army) don’t allow us either to sow or cut our crops, our sole livelihood. How much worse our lives can become?” says his brother, Mukesh. The five brothers of this family of farmers have to contend with heightened Pakistani firing during sowing and reaping seasons—a deadly, nefarious pattern, they say.

Though the Pakistan flag on the border outpost is clearly visible from the roofs of the houses here, life once went on in its annual cycle. Now, none of the terrified 12,000 villagers dares to sleep on his terrace in the hot summer nights—a normal practice before 2001.

Rampant shellfire has stalled core occupations of farming and tending to livestock. As many thousands flee, schools have also closed down.

With farming deemed ‘dangerous’ bec­ause of its proximity to sudden death, edu­cation, too, stands suspended. Schools along the India-Pakistan border are closed when a bout of firing starts. On May 23, schools were closed for three days. With an early summer vacation declared, the 250 students of Ashoka Model High School, which Krishna, who fell prey to the firing attended, were informed of their homework by teachers on phone.

“For two days, the village was deserted. We were worried more about our lives than studies. How can one study when guns are booming? We can’t trust Pakistan, but our hopes for living a respectable life has gone too. We talk about guns and deaths, not studies,” says 15-yr-old Rahi Sharma, a cousin of Krishna. “In such a competitive age, how can we compete with students of Jammu city, leave alone metros? We are Brahmins, we don’t have reservation too. It’s stone age rather than digital age for us,” she adds hopelessly. 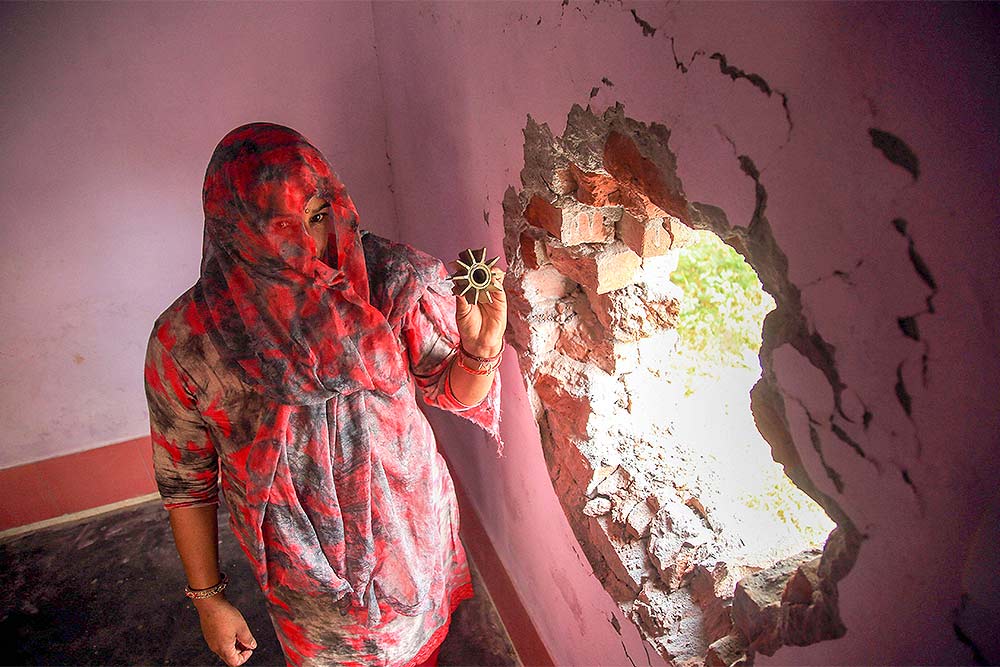 The dispirited Gujjars of Jeorah farm now question the very founding principles of Pakistan. “Does Pakistan believe Mus­lims live only in its side? Are we not Mus­lims? In this holy month it’s forbidden to utter even a bad word.... What kind of Isl­amic republic is it?,” wonders Fukuran Ali.

In this open season of hostility, there have been 1,250 ceasefire violations by Pakistan till May 28 along the international border and the Line-of-Control, almost all of them in Jammu—the highest since the ceasefire agreement of 2003. Vigorous retaliation by the Indian army presents a peculiar problem too. While residents support, to a degree, the aggressive response, but they are not sure if it’s yielding results. And the BJP, which swept the assembly polls in Jammu and leads at the Centre, is feeling the simmering discontent.

“My engagement was called off by the girl’s family, who said they don’t want her to live on the constant line of fire and dep­end on the government or volunteers for food. It seems our generation is coming to an end,” says Rehmat Ali of Jeora.

The current round of ceasefire violations doesn’t seem to end, despite the pronounced best intentions of the top brass. Peace seems to be receding ever more in the past two years of turmoil in Jammu & Kashmir. A day after firing by Pakistan killed two BSF personnel, a sector-commander level meeting of Pakistan Rangers and BSF was held at RS Pura, where the two sides agreed on a  ‘firing free agreement’—something that seems an impossible dream to realise. And every loss seems to sap a litle bit of this long-suffering people’s will to carry on with their lives.

By Tarun Upadhyay in Jammu

Slide Down An Oil Slick