The first-time CM has much to cheer about, like a wider support base, but many more worries: militancy, finances, infighting… 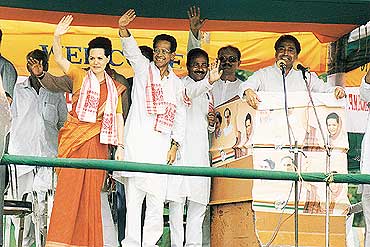 outlookindia.com
-0001-11-30T00:00:00+0553
For a brief 24-hour period on May 15, it seemed Tarun Gogoi, the new chief minister of Assam, would once again be pipped at the post by Bhubaneshwar Kalita, a last-minute contender for the top slot. But an unequivocal message from Sonia Gandhi backing Gogoi clinched the issue, paving the way for a Congress government in Assam after a five-year gap. For Gogoi, ascending to the throne has been a culmination of a 30-year stint in the party, spent variously as a six-time Lok Sabha MP, joint secretary of the aicc and minister of state in the P.V. Narasimha Rao government.

In a way, history favoured the Congress. Voters in Assam did not deviate from the tradition they have maintained for the last three decades of voting out incumbent governments. Gogoi, however, claims that it was not history repeating itself but that the people wanted a change and voted the Congress in.

There is, however, a major difference in the Congress victory in 2001 from its earlier wins in 1983 and 1991. Traditionally, the Congress has depended upon Muslims, tea garden workers and a section of Bengali Hindus for its votes. But for the first time since the Emergency, the party got good support even from its non-traditional supporters. Buoyed by this fact, Gogoi says, "I want to make a fresh beginning in all aspects, be it rebuilding the composite Assamese society or making the state prosperous."

The Asom Gana Parishad (agp) government led by Prafulla Kumar Mahanta was routed in its bastions in lower Assam mainly because of its poor governance and charges of mysterious killings of the family members of the militants. To be fair to Mahanta, the first three years of his tenure were spent in battling insurgency. The last two, critics say, were spent in personal aggrandisement. Then there were the confusing signals emanating from the hastily put-together alliance with the bjp. Admits Mahanta: "We failed because the news of our alliance with the bjp did not reach our workers, leave alone the masses, so people were confused." He also blames the ulfa for terrorising agp supporters. The net result was that the agp managed only 20 seats.

The BJP, contrary to the general impression, has done better than in the 1996 assembly elections, when it bagged just four seats. This time it has doubled the tally but more importantly, it has made inroads into Congress bastions dominated by tea garden voters. The most spectacular showing of course has been of the All Bodo Students Union (absu)-backed candidates. Out of the 13 seats they contested, the absu secured 10, giving it a strong presence in the state assembly.

The states finances are a shambles, with the government not able pay salaries to its employees. The state's fiscal health will have to be given priority by the new chief minister. Admits Gogoi: "The state's financial position is indeed precarious. At this moment, I do not want to go into the reasons for such a state of affairs but I will seek some time from the employees to evolve a solution."

But Gogoi, who has become CM for the first time, has several other battles on hand. His toughest job will be to generate more jobs for the state's 17 lakh unemployed. "The biggest problem we have is unemployment. Insurgency is born out of unemployment," he told Outlook. On the insurgency front too, he has his job cut out, but Gogoi seemed to be taking the right approach. "The solution to any insurgency problem has to be political, not military," Gogoi said. Though he has spoken of a Nagaland-type approach, it is easier declared than implemented since neither the ulfa nor the National Democratic Front of Bodoland have shown any inclination of sitting down for talks like their Naga counterparts.

But Gogoi remains optimistic: "I will ask the Centre to follow the same principles as it has done in Nagaland of declaring a ceasefire and holding talks with the groups there although they have not given up their demand for sovereignty."

Gogoi will also have to contend with the various powerful factions within the party, which will always be sniping at the new chief minister. Above all, Gogoi, with a thumping mandate behind him, will be weighed down by expectations that are difficult to fulfil in one single term.